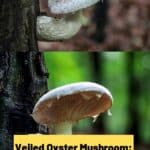 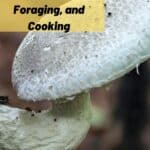 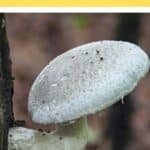 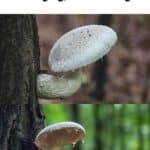 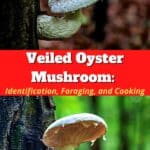 The Veiled oyster mushroom (Pleurotus dryinus) is quite different from most other oyster mushrooms found in North America. This oyster mushroom’s uniqueness makes identification more straightforward, yet it is still a little complicated. That’s just how the mushroom world is sometimes!

Veiled oyster mushrooms are excellent for foraging and eating when they’re young; they’re a great beginner mushroom, too. The lookalikes are also edible, so it is just a matter of ensuring you have an oyster mushroom.

All About Veiled Oyster Mushrooms

This oyster mushroom species is unique in that it has a long stem, a veil that breaks apart and leaves a ring around the stem, and a fuzzy cap. Veiled oysters grow across North America, appearing at different times in different climates. It is a decomposer, like all oyster mushrooms, and prefers oak and beech trees.

The scientific name dryinus is a morphing of a Greek word that means “related to oak.” There is a lot of confusion about the identification and naming of this species. At first, several species were separated out as different, but now most of them are included under the P. dryinus umbrella as this is the oldest name in use.

Pleurotus albertinii, Pleurotus corticatus, and Pleurotus dryinus var. tephrotrichus are all now considered synonyms of the Veiled oyster mushroom. You may see some of these names in older books.

The Veiled oyster has a long fruiting season – it will appear from spring through fall, depending on the weather and climate. In southern states, it is almost year-round. On the west coast, it is a winter mushroom.

Veiled oyster mushrooms grow from dead or dying hardwood trees. They prefer oak and beech trees. It is also known to be weakly parasitic, and it can be found growing on sick or struggling trees. Sometimes the Veiled oyster grows on conifers, but it isn’t common.

Usually, the fruiting bodies grow solitarily, but sometimes they grow in small groups or clumps.

The cap of the Veiled oyster mushroom is cream, beige, or grayish colored. It may turn a yellow tinge as it ages. The caps average 2-5 inches wide – they’re not massive but definitely distinctive. When the mushroom first appears, a thin white veil covers the gills. Then, as the mushroom grows, it expands and breaks free from the veil.

Veil remnants often remain along the edge and top of the cap, and there is a tell-tale white ring or skirt around the upper part of the stem. The cap is densely fuzzy in youth; then, the fuzziness may turn into grayish brown scales. The cap may be smooth and bare in very old specimens and may crack.

The cap is circular (not ‘oyster-shaped’) and convex when young with an inrolled margin. With maturity, the cap broadens and becomes widely funnel-shaped.

Veiled oyster mushroom stems are cream-colored or pale brown and vary in length – compared to other oyster mushrooms, which often have stubby stems, this one is long. The stem will stretch out to the light and is usually curved. The stem can be nonexistent, as well. On average, though, it is 1-3 inches long. Veiled oyster stems are densely fuzzy on the lower half, below the ring. Above the ring, the stem is smooth.

The gills of the Veiled oyster mushroom are decurrent, like with all oyster mushrooms. Decurrent means the gills run partway down the stem. They are white or cream colored and do not bruise or bleed when cut.

Veiled oysters don’t have a strong scent like the common oyster mushroom (P. ostreatus), which smells like anise. Instead, this oyster mushroom just has a pleasant mushroomy or slightly fruity smell.

The flesh of the Veiled oyster is white and does not change color when cut.

The biggest issue with identifying Veiled oysters is that the ring and veil remnants may disappear with age. Then, it looks a lot like the lookalikes mentioned further down. If you do see the veil, though, you can be assured it is P. dryinus as it is the only North American oyster species with a veil and ring.

Even though the veil and ring may appear very faint, there is usually at least some sign it was there.

There is no surefire way to find Veiled oyster mushrooms. The most common circumstance is you see something large and white growing out of the side of a tree. Since their season varies so widely, it could be this mushroom at anytime.

Keep your eyes especially attentive around oak and beech trees, and be sure to look around downed logs, stumps, and dead trees.

The best specimens are those that are still young. It gets pretty tough as it ages and is not the best to eat. Compared to other oyster mushroom species, it is considered slightly inferior as far as quality.

Use a sharp knife to cut the mushroom off the tree. Remove the tough stems and keep the caps.

It looks very similar with a long, curved stem growing on hardwood trees. But, it lacks the ring around the stem that is a constant on Veiled oysters. It also doesn’t have decurrent gills since it’s not a “true” oyster species. This mushroom is an excellent edible.

This oyster mushroom lookalike also has large white or cream-colored fuzzy caps, decurrent white gills, and an odd hairy stem. It doesn’t have a veil, though, or the resulting ring around the stem. It is often confused with the Veiled oyster, though, as in all other ways, they are the same. It is edible, so it’s okay if you can’t tell them apart.

The entire mushroom is edible, but it tastes best when it is younger. As it ages, it gets pretty tough. It doesn’t get inedible tough, but more like not all that enjoyable anymore. The stem gets tougher quicker than the cap, so often, you’ll have to remove the stem and just use the cap.

The fuzzy cap and stem can be a bit too much texture, so if you have some really hairy ones, skin them before cooking. If they’re overly fuzzy, eating them is a bit like eating something with a felt cloth covering. Not enjoyable.

Does the veiled oyster mushroom have poisonous lookalikes?

No. Angel Wing Mushrooms (https://www.mushroom-appreciation.com/angel-wings-identification.html) are sometimes confused with other oyster mushrooms, but they look nothing like the veiled oyster.

Where does the veiled oyster mushroom grow?

This oyster mushroom species occurs across North America, Asia, and Europe — it is very widespread.