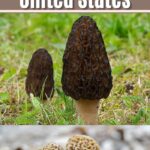 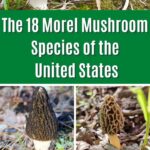 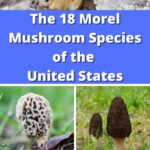 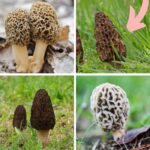 Identifying morel mushrooms is relatively easy, as they have a distinct look and grow at very specific times of the year. However, once you start looking closer, it gets much more complicated. Knowing the morel species is helpful in many ways, though, even before you start foraging.

For centuries, morels were identified by their coloring – foragers referred to them as black morels, yellow morels, gray morels, or greenies. Recent studies show there are much more than the 3 or 4 types categorized previously. And, there likely are more to be “discovered” in the future. The most recent study actually classified 19 species, but one isn’t fully described yet.

Thankfully, all the morels are perfectly edible (and delicious!), so it doesn’t matter if you know the proper scientific name or designation before consuming them.

So many different variables come together to create the mysterious morel! As science and amateur observation moves forward, so will our understanding of this prized mushroom.

Why Knowing The Morel Species Is Important For Foraging

For tips on a successful morel hunt and information about lookalikes, check out these posts — Helpful Morel Hunting Tips and Secrets and False Morel Mushrooms – Everything You Need to Know.

How Many Morel Species Are There In North America?

At this moment, there are 18 described species of morels in North America:

The morel mushroom has a stubby-looking white stem with an oddly-shaped tall conical or egg-shaped cap. The cap is honeycombed, with ridges and indentations covering it entirely. Upon closer inspection, the cap actually fits around the tall stem like a hat that has been pulled down all the way.

The caps attach to the stem at the lowest point and can easily be dislodged or disrupted if they are handled too much.

To correctly identify a morel, you need to understand the difference between ridges and pits because their coloring varies across species. In addition, there are features that all morels share.

There are five types of yellow morels, and they can be pretty hard to tell apart. Or, depending on where you live, it can be quite easy because there is only one possibility. The honeycombing on yellow morel caps is not vertical like with black morels. Instead, the honeycomb pattern is random without a specific orientation.

All black morels have some basic characteristics in common. Their caps are conical, elongated, honeycombed, and covered in ridges with deep pits. The ridges and pits on black morels all run vertically down the cap.

The bottom of the cap is fused to the stalk, and in most cases, the cap is longer than the stem. The stem is generally a lighter color than the cap, usually a sandy yellow or whitish shade.

The white morel is unique in many ways. First of all, there is just one white morel in North America. Secondly, the white morel is saprobic, meaning it feeds off of dead or decaying organic material. This means that its growth is not tied to a tree species. In fact, it often doesn’t grow around trees.

Like all morels, the white morel has an elongated, honeycombed cap covered in ridges and deep pits. The stem and cap are both hollow, so it is hollow from top to bottom when you cut them open. The base of the cap is attached to the stem, and the cap is usually longer than the stem. The stem is white or off-white or tan in color.

This morel species can be cultivated, but so far, due to many reasons, it is not commercially viable yet. The process is ongoing with many folks making a go at it, but there are no morels in my supermarket yet!

Notice the differences in ridge and pit arrangements.

Only one morel species grows all over North America. The scientific name of this morel is entirely appropriate given its unique status – Morchella americana! This coast-to-coast species is a yellow morel, and in addition to being widespread, it also grows with a wide range of trees. Most likely, this is why it grows in so many places – it isn’t so picky about tree hosts.

Also known as M. esculentoides, this one can be found from the east to the west coast, north and south, and everywhere in-between.

This yellow species of morel grows in many of the northern states and is not separated by east or west like all the other morels.

This is the standard, classic, black morel. It is the only black morel in most places, making it easy to identify.

A type of morel called a half-free morel.

This morel gets its name appropriately from its small size compared to other yellow morels.

This is the standard, classic, west coast black morel.

This morel gets its name from the fact that it is an opportunistic morel. This is the prime morel species used in cultivation since its habitat is easier to replicate.

A fun morel and quite distinguishable from other black morels.

Another morel that is aptly named.

The last four types of west coast morels are called burn-site morels because they grow exclusively in burned conifer forests. They grow in the spring following a fire and sometimes for a couple of years afterward as well. However, in later years, they appear in fewer and fewer quantities.

These two are indistinguishable from each other without DNA analysis.

This one stands out from other burn-site morels because when it is young, it is super fuzzy.

This morel was discovered initially and notated by mycologists in Mexico. Since then, it has been found in coastal California and Oregon and is likely to have a wider distribution than is currently known.

Which morel is gray?

Three yellow morel species have gray coloring when they are young, M. americana, M.cryptica, and M.virginiana. They will change color as they mature. Scientifically speaking, there is no such thing as a gray morel.

What is the greenie morel?

Greenie and pickle are common names applied to two types of black burn morels which are olive or olive-brown colored when young, M.sextelata and M.septimelata.

Look up your region and determine which morels grow in your area. Then, study their habitat and seasonal preferences to know the best places to look and when to start looking.

Remember, morels appear in southern states earlier than in northern states. Morels usually only grow for 3-4 weeks in each region. So, when the guide says March-May, it means March for southern areas and May for more northern regions. That’s why there is a range; it does not mean that they will grow for all of those months in your location.

How can I be successful foraging morels?

Knowledge is power! Learn the land; learn where to look based on which species grow near you, and you’ll have much better success. So much depends on where you live. For example, looking for white morels in the Pacific Northwest won’t get you very far. And, vice versa, seeking burn morels in North Carolina will get you nothing.

« 15 Best Mushrooms to Grow at Home
What Is Chaga Mushroom? Everything You Need to Know »