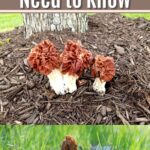 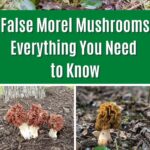 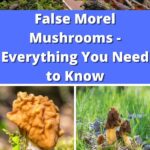 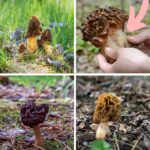 You’ve likely heard of a morel mushroom, but what’s the deal with the fake one? And, why does it matter? If you’re new to morel foraging, you’ll want to fully understand all the look-alikes. And, sadly, there isn’t just one. There’s actually several morel look-alikes that are called false morels.

What Is A False Morel?

The term “false morel” encompasses a number of different species including Gyromitra esculenta (the beefsteak mushroom), Gyromitra caroliniana, and others in the Verpa and Helvella genera. They are often mistaken for the edible delicacies in the Morchella genus (true morels).

These are some of many poisonous mushrooms that contain the chemical monomethyl hydrazine (MMH). MMH causes vomiting, dizziness, diarrhea, and sometimes death. Furthermore, MMH is suspected to be carcinogenic.

“But wait,” you ask, “haven’t I heard of people eating these mushrooms with no ill effect?”

You probably have. Many people have eaten them and some even hunt for them specifically. It may surprise you that Gyromitra esculenta is considered a delicacy in parts of the Great Lakes region of the United States and in parts of Scandinavia. You can even buy them in Finland, where they come with preparation instructions!

So what’s the problem? One danger is the varying levels of MMH in different poisonous mushrooms. Some species contain very little, others contain enough to kill. MMH levels also vary among geographic regions within a single species. Nobody knows how toxic any false morel will be in any location.

Let’s learn more about the fake morel. We’ll start with some facts, move on to identification, and finally take a look at who eats these mushrooms. For a more complete list of straight morel mushroom hunting tips click here.

How to Identify the False Morel Mushroom

So how do you tell a true morel from a false one? Observe the following:

Go here for a more in-depth article, including a handy chart, on how to tell a true morel mushroom from a false morel.

*answers at the bottom

#1. In the two pictures below, which one is the true morel and which is a verpa bohemica? Hint: Look closely at the cap design.

#2. In the two pictures below, which one is the true morel and which is verpa bohemica?

#3. Which one is a true morel and which is a Gyromitra false morel?

#4. In the two pictures below, which one is the true morel and which is a verpa?

Always consult a local expert if you’re inexperienced or uncertain. Never eat a mushroom-based solely on mushroom pictures that you’ve seen on the Internet! This goes for ALL mushrooms, not just morels or false morels.

If you feel sick or dizzy after eating what you thought was an edible morel, seek help immediately!

Who’s Eating These Mushrooms….and Why?

The picture at the right shows false morels for sale at a market in Helsinki, Finland. People in other parts of Europe and parts of the United States eat them as well. They often come with warnings and preparation instructions.

One reason people eat them is the belief that correct preparation renders them safe. Through parboiling, the toxins are reduced and the mushrooms become edible.

However, MMH is a cumulative toxin. This means that its levels will build up in your body after repeated consumption. This could lead to illness or even death. Keep that in mind the next time someone insists to you that they’ve safely eaten these poisonous mushrooms.

Plenty of people eat these for years with no problems. But why risk it? These are poisonous mushrooms that have caused deaths and illness. No one knows how toxic any given mushroom will be so it’s best to just avoid them altogether.

Besides, no false morel could match the taste of a true Morchella esculenta!

« Identify Mushrooms: Learn About Gills, Pores, and Teeth
How to Pasteurize Straw for Growing Mushrooms »