Proper identification of chanterelle mushrooms is crucial if you want to start harvesting them from the wild. There are poisonous false species; so making a mistake could lead to a miserable intestinal adventure.

Yet don't let that scare you off! With practice, chanterelle identification will become easier. You'll start to clearly see how they differ from their look-alikes.

Like so many mushrooms, there is current confusion over chanterelle classification. Mycologists now believe that the original Cantharellus cibarius may actually be made up of a number of different species. For this reason I've avoided using species names on this page, instead just sticking to main chanterelle characteristics.

This page is divided into two sections. The first goes over the features of chanterelle mushrooms. The second section deals with the false look-alikes. Please take the time to become familiar with these so you don't make a mistake when mushroom hunting.

My final disclaimer is that you should never eat a mushroom based solely on what you've learned online, including this page. Be sure to get some practice with a local expert, and never eat anything you can't positively identify!

Being able to recognize false gills is one of the most useful skills for chanterelle identification. False gills appear as forked folds or interlaced wrinkles on the underside of a mushroom.

False gills are not easily removed from the cap, and look as though they have "melted". You couldn't separate them from the cap without ripping something. The picture on the right is an example.

Note how in chanterelle mushrooms the false gills are decurrent, meaning they run down the stem.

True gills are individual, blade-like structures. They can be picked off separate from the cap and each other. Button mushrooms in the grocery store are examples.

Smooth, with no bulb around the base or ring. Not hollow. Same color as the cap.

Just picked specimens will have a sweet smell like apricots.

July to September, or whatever passes as mid-summer to early fall in your area.

Chanterelle mushrooms are most commonly confused with either the jack o'lantern or the false chanterelle. Although not fatal, neither should be eaten.

Jack o'lanterns (Omphalotus olearius, Omphalotus illudens, Omphalotus olivascens) contain the toxin muscarine. If eaten, they can cause severe cramps and diarrhea. The picture on the right shows a clump of them.

One of the best ways to identify a chanterelle from a jack o'lantern is by examining the gills. Remember that chanterelles have false gills, which are forking wrinkles on the underside of the mushroom that appear "melted". Jack o'lanterns have true gills, meaning they are non-forked and knife-like.

Other ways to tell a jack o'lantern from a chanterelle:

An experienced eye usually won't have a hard time distinguishing between a jack o'lantern and a chanterelle. Take some time to look at pictures and try to find examples in the wild. A trip out with your local mushroom club can be a great help.

The next look-alike is the aptly named false chanterelle (Hygrophoropsis aurantiaca). Although some say this mushroom is edible, it reportedly is far too bitter to taste good. The picture on the left shows a few false chanterelles.

There are claims that this mushroom is outright poisonous, giving them upset stomachs and digestive problems. Thus it's best to avoid the false chanterelle altogether. 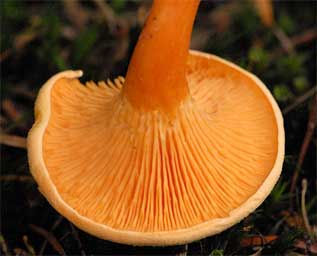 Again, the main way to tell a true chanterelle from false is by examining the gills. False chanterelles have true gills, although they are forked on the edges. They still appear as close blades rather than lumpy folds. See how they differ from the gill picture in the first section above?

Another way to distinguish the two is with color. The false chanterelle is a deeper orange with no yellow. The color is also graded, meaning they're darker at the center of the cap rather than one uniform color.

None of that is a substitute for real-life examples. Don't try to identify chanterelles without going on a few mushroom forays and getting instruction from someone knowledgeable. Remember: "when in doubt, throw it out", because you really don't want to make the mistake of eating a jack o'lantern!

The first jack o'lantern picture was taken by Saharadesertfox and is published on Wikipedia under the GNU Free Documentation License.

The second jack o'lantern picture was taken by Tim Rushing and is published on Wikipedia under the GNU Free Documentation License.

The two false chanterelle pictures were taken by James Lindsey and are published on Wikipedia under the GNU Free Documentation License.