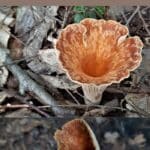 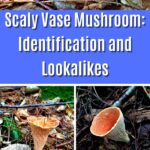 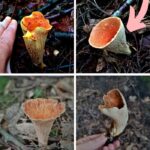 Most people probably wouldn’t pay much attention to this oddly shaped mushroom except for its passing resemblance to a chanterelle. The scaly vase mushroom (Turbinellus floccosus) isn’t really an edible in North America except to the overly daring who want to push the boundaries.

Scaly vases aren’t poisonous, and they’re not a fine edible; they’re in that in-between spot where most mushrooms live – not great for eating but not going to kill you either. They’re a widespread mushroom, growing across most of northern North America.

To learn more about Chanterelles, check out this extensive guide to North American chanterelles.

The Scaly Vase mushroom is also commonly known by many names, including:

Summer through fall. On the west coast, you can also find them in winter.

Unlike some mushrooms, which deteriorate quickly, the Scaly Vase is a slow grower, and the fruit bodies last up to a month.

The Scaly Vase mushroom grows in mycorrhizal association with conifer trees, including pines, firs, hemlocks, and spruces. It usually grows singularly, but there is often more than one scattered around the area. It only grows from the ground, never on or from trees, stumps, or logs.

In higher elevations, it isn’t uncommon to see several caps emerging from one stem.

The cap looks like a vase or an empty ice cream cone. Or a turban (hence the scientific name Turbinellus). I often think of it as a chalice filled with the sacred mushroom water.

The top of the cap is usually reddish-orange to orange-brown – there is quite a bit of variance in the coloring, but it is always darker than the stem section. It often has water or leaves collected in the depression on top.

As the Scaly Vase mushroom matures, scales develop on the cap — or more correctly, they separate out from the cap surface. The mushroom looks like a small blooming onion. Or a dull-colored peony flower with overlapping petals.

There is no clear distinction between the cap and stem on the Scaly Vase mushroom. The whole outer surface is basically the stem. It is always lighter colored than the very top of the cap, usually a very pale orange or creamy light orange-tan. The outer surface is covered with deep wrinkles and folds across the entire length.

Scaly Vase mushrooms grow around 12 inches tall and 12 inches wide. The interior flesh is white, and it does not change color when sliced.

The coloring of the Scaly Vase varies by climate and age. In warm and humid weather, the caps are brighter and more reddish-orange. Older specimens of the Scaly Vase are usually very pale orange or creamy brown.

There are five species in the genus Turbinellus. Two of these species, the Scaly Vase (T. floccosus described above) and Turbinellus kauffmanii, grow in North America. The other three species are in Asia.

Turbinellus kauffmanii looks extremely similar to the scaly vase, with the same vase, turban, or ice cream cone shape. The outer surface is yellowish to pink and features the same ridges and folds down the entire length.

T. kauffmanii’s top surface is olive-brown and features petal-like scales on the interior. The cap on T. kauffmanii is 4-8 inches in diameter, and it grows 3-6 inches tall. It is much smaller than the Scaly Vase. Like the Scaly Vase, this species has white flesh that does not turn color when cut.

T. kauffmanii is found in the Pacific Northwest and northern California around conifer trees in the summer.

Scaly vase is commonly mixed up with chanterelles, although this has more to do with the mushroom forager hoping and hoping some more that it is the treasured chanterelle. When they learn it is just the scaly vase, there is usually much disappointment.

Scaly vase mushrooms and chanterelles are both vase-shaped, orangish in color, and don’t have “regular” gills. Chanterelles have false gills while scaly vases have ridges and folds – these non-gills are visually similar but not scientifically similar.

This oddball mushroom used to be called Gomphus floccosus – many old guidebooks still have it listed under this name. A scientific study in the 2010s determined it did not belong there but instead belonged to a new (but old) classification, Turbinellus.

The Scaly Vase has a mild or sour taste, but the distress it causes your gastrointestinal system probably won’t be mild. Side effects of eating this mushroom include vomiting, nausea, and diarrhea.

That being said, the indigenous peoples of Mexico, India, and Nepal eat this mushroom and regard it highly. It is unknown whether these peoples have developed an immunity to the toxins over time or whether the mushrooms in those areas are nontoxic.

What we do know, though, is that the North American specimens contain tricarboxylic acid, which is known to cause extreme gastrointestinal distress. This compound caused skeletal muscle weakness and central nervous depression in laboratory experiments with rats.

The Scaly Vase contains at least double the amount of this toxin than its western cousin, T. kauffmanii. The onset of symptoms can be as much as 8-14 hours after consumption.

Is the Scaly Vase mushroom a type of chanterelle?

No, it is not related, even though many people call it the scaly vase chanterelle or woolly chanterelle.

This is one of the problems with common names – they can lead people to the wrong conclusion. It has these common names because it somewhat resembles a chanterelle.

Can you eat scaly vase mushrooms?

It depends on how much of a risk you want to take. They’re not going to kill you, but you will probably seriously regret being so adventurous.