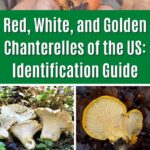 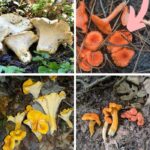 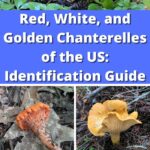 Not that long ago, less than 20 years ago, if you called a yellow chanterelle Cantharellus cibarius, everyone would nod their head in agreement. Usually, the golden chanterelle in question looked similar enough that no one gave it much thought.

However, this easy identification process got unceremoniously tossed out the door due to recent DNA analysis. First of all, Cantharellus cibarius is only a European species. So, if you are foraging chanterelles in North America, strike that species’ name from your mind. Many identification guides aren’t updated, so be warned, you’ll likely still encounter this name. But, it’s not accurate anymore (Thank you science, we think…).

In addition to the “common” golden chanterelle in the US no longer having its long-used name, DNA analysis split out the golden chanterelles into many different species. So, there isn’t just one name to replace the common name we’ve been using. Talk about confusing! And, it is likely there will be more changes as more research is done.

If you’re new to foraging chanterelle mushrooms, you should start with the essential Chanterelle Foraging Guide. This guide discusses false gills, how to pick out the specific characteristics of chanterelles to make a positive identification, as well as detailed information about foraging and dangerous lookalikes.

Chanterelle Science and Why It’s Important?

Science needs your help! When you collect golden Cantharellus cibarius-like chanterelles, take a moment to do a little documentation. This is the only way we will have any resolution to the great Chanterelle conundrum. We’re the ones out in the woods, at ground level, foraging all these stunning mushrooms and getting first-hand knowledge about how and where they’re growing.

Many foragers who’ve been collecting golden chanterelles for decades may wonder why it’s even important to know the specific species. After all, the mushrooms being collected are obviously chanterelles, and they’re edible, so what else matters.

In some ways, this is true. If you’ve been collecting golden chanties for years, it does seem a little pointless to pay attention to particulars now. But unfortunately, that way of thinking is very in-the-moment and can lead to unexpected consequences.

As our world changes, natural forested land where chanterelles grow is diminished. Chanterelles are mycorrhizal, which means they grow in association with different trees. And the tree type varies across species.

The mushroom world is a small one compared to the logging/building/land development world, so any information we glean that may protect a species of mushroom is seriously essential. It might not be necessary now, but it could be in the near future.

The more we understand about the specific species, the more we can protect them. Possibly, in the future, this additional information will help us figure out how to grow them, too. For now, though, if we aren’t paying attention to and recording the tree associations, time of year, size, and habitat, we might unintentionally destroy all their habitat and never see them again.

There are 40 or more chanterelle types in North America. This list doesn’t detail them all but gives as much of a thorough run-down as is possible by the citizen mycologist. I’ve broken the species down into sections based on basic coloring: golden/yellow, white, and red. This is a rough separation and by no means regulated. However, from a foraging perspective, it helps a lot.

This guide doesn’t go into all the specifics of false gills or the characteristics necessary to identify chanterelles successfully. If you’re interested in a more basic guide, check out the Chanterelle Foraging Guide, which includes identification information, lookalikes, seasonality, and habitat information.

Exactly like Cantharellus cinnabarinus except found in Texas and the Gulf States. Exact distribution is unknown. Grows with pine and oak in sandy soil.

Are all chanterelles edible?

Yes, all chanterelles are edible. And they’re one of the best-tasting wild edible mushrooms out there. You have to be very careful about identification, though, as there are some lookalikes that people often get confused about. And one of the lookalikes is quite toxic. To learn more about proper identification and lookalikes, study the Chanterelle Foraging Guide.

Most chanterelles have a very distinctive fruity smell. Most people liken it to apricots, sweet almonds, or a fruity sweet scent.

Can I grow chanterelles?

We wish! Due to their mycorrhizal association with specific tree species, chanterelles have so far eluded determined growers. This isn’t to say it isn’t possible, just that it hasn’t been figured out yet.

When do chanterelles grow?

Chanterelles adore a hot sauna. Start looking after long drenching rains followed by hot, humid days. This weather isn’t much fun for the forager, but for chanterelles, well, it’s worth it! It generally takes a few days after the rains for chanterelles to fruit.