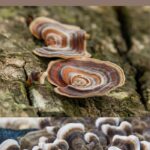 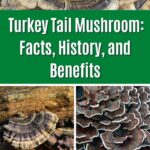 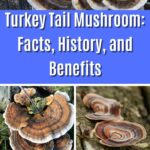 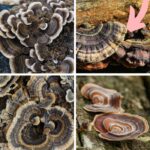 What’s colorful, common, and reminds you of the backside of a flightless fowl? Why it’s Trametes versicolor, also known as Coriolus versicolor, the turkey tail mushroom! (Okay, okay, I’ve seen turkeys fly too, but not very well. I just wanted to say “flightless fowl”).

Even if you think you don’t know what a turkey tail mushroom is, you’ve probably already seen one. This species grows on dead hardwood throughout the world, and is extremely common in North America.

Trametes versicolor’s most distinguishing feature is the arched bands of brown, tan, and white that resemble the tail of a strutting turkey. Although shades of brown are the most likely, you may find them with stunning bands of blue, red, orange, or green.

Yet there’s more to the turkey tail than beautiful colors! This mushroom is a powerful immune system enhancer with years of medicinal use behind it.

Let’s delve deeper into the world of the turkey tail mushroom. We’ll start with some basic facts, move on to medicinal information, and end with instructions on how to take them and where to buy or find.

The ubiquitous turkey tail is not a gourmet mushroom. You won’t see them on a five star menu sauteed with wild leeks. This species has one main claim to fame: as a medicinal mushroom. And a powerful one at that.

What makes it so potent? It’s full of a protein-bound molecule known as PSK, or polysaccharide K. A polysaccharide is simply a complex carbohydrate that is made up of a repeating chain of simple sugars.

Not a very sexy definition, but many polysaccharides (including PSK) have been shown to boost the immune system to fight infection and many different types of cancers.

PSK works by suppressing the growth of tumor cells, inhibiting the expression of genes that have the potential to cause cancer, and stimulating the immune system to produce more of the body’s own cells that attack foreign cells.

You can read more about the mechanism of action of PSK, as well as find lots of reference links to various studies, at the Memorial Sloan-Kettering Cancer Center page here. (Note: this site may make you agree to a disclaimer before they let you in. Go ahead and agree. It’s safe and they have lots of great info).

Yet this mushroom contains more benefits than Coriolus versicolor PSK. The various constituents work together to reportedly:

Studies into this medicinal mushroom are ongoing, including a $5.4 million prostate cancer study done through Bastyr University and the NIH (National Institute of Health).

The evidence for the positive benefit of Trametes versicolor on personal health is definitely there. It will be interesting to see what more we can learn in the near future!

How to Take Your Turkey Tail Mushrooms

So you’ve learned more about Trametes versicolor and want to start supplementing with them. Yet where do you get them? And what dose do you take? Let’s find out!

Important: It’s tempting to go buck wild and start out taking a full dose. However, this could cause stomach upset. For the first week or two, it’s best to just take a half dose and work your way up. Your intestines will thank you!

Here’s a brief summary of how to supplement, with more details in the paragraphs below:

No doubt the easiest way to take your turkey tails is to just buy them in pill form. This is the most expensive option, but it’s also the one that requires the least amount of work on your part.

Make sure your pills come from a reputable company and ideally are organic if you can afford it. I like the Host Defense product made by Fungi Perfecti, although there are cheaper ones which are good as well.

The link to the right is for 120 pills, which will get you free shipping through Amazon. However, they also have a 60 capsule option if you want to start out cheaper.

Dosage for dried Trametes versicolor is between 1 and 9 grams a day, depending on your health. Your pill bottle will tell you how many to take. Remember to start small and work up to a full dose to prevent a possible stomach rebellion!

Another option is to buy the straight powder and make pills or tea yourself. While this does require a little more work and the initial investment of a pill machine (usually around $20-$30), it can be significantly cheaper in the long run.

Again, your powder should be organic and come from a reputable company. Total Nutraceuticals sells 8 oz of organic turkey tail powder for around $30. That’s a lot of pills!

The instructions that come with your pill machine will tell you how to make the pills. It’s a simple process that doesn’t require a huge time commitment.

The dosage should be between 1 to 9 grams of the powder. Make sure to take into account how big your pills are, and remember to start taking them in smaller amounts at first.

Capsules and powder aren’t your thing? Do you prefer to drink your medicine? Have no fear, you can take your mushrooms (whole or powdered) and make a healthy tea from them!

Making mushroom tea involves steeping your whole or powdered mushrooms in hot water for a few hours to make a medicinal extract. Some people follow this up with an alcohol extract as well.

Tea can be hard to standardize and dose, but a few grams of dried mushrooms per cup of tea is a good place to start.

Check out my page on mushroom tea for full instructions. These directions are for reishi mushrooms, but they’ll work with any kind of medicinal mushroom.

Of course the cheapest way to take these mushrooms is to find them in the wild and then make pills or tea from them yourself!

Turkey tails are easy to find, and pretty easy to identify. I’ve listed some identification characteristics in the facts section above. You can also learn more about Trametes versicolor identification at this great page here.

Never eat something you haven’t identified positively in the wild at least 3 times, and never rely on the Internet as the final word in mushroom identification. As they say on those signs in the Grand Canyon: “You are responsible for your own safety”.

If you’re seriously looking to get started identifying Trametes versicolor then I’d highly recommend joining a local mushroom club. They’ll set you on the right path!

I hope you enjoyed learning about Trametes versicolor. May their colorful “plumage” reveal itself to you the next time you’re outside!

« Ophiocordyceps Sinensis – Facts and Benefits
Growing Mushrooms – What is a Substrate? »