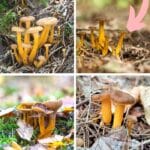 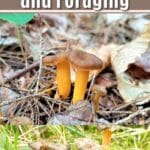 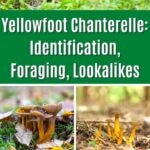 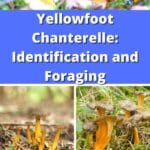 Like their close cousins, the chanterelle and black trumpet (horn of plenty), yellowfoot mushrooms are edible, yummy, and abundant. Yellowfoot mushrooms are actually easier to forage than chanterelles or black trumpets. They appear in large groupings on the forest floor, which is excellent for the forager because they’re petite little gems. You need to collect quite a basketful to make a meal of them.

Yellowfoot mushrooms try very hard to show off their outstanding features, only to be continuously ignored by the chanterelle-crazed single-mindedness of most foragers. However, this cousin to the chanterelle shouldn’t be overlooked. They’re an excellent beginner mushroom, with no poisonous lookalikes, and they are good eating.

These mushrooms grow across North America, and there are 3 (or so) species. Of course, there is still some studying to do to clarify the intricacies of each one thoroughly. For our purposes, we’ll focus on the three most documented yellowfoot chanterelle mushrooms.

Yellowfoot chanterelles are northern mushrooms, appearing in forests across the Northeast, Mid-Atlantic, Midwest, and Pacific Northwest. They don’t appear in the south or southwest.

Other common names for yellowfoot mushrooms include:

All About The Yellowfoot Chanterelle

Yellowfoot mushrooms used to be classified as chanterelles but recently moved to another genus, Craterellus. They’re still in the same family; the resemblance and relation are unmistakable.

The yellowfoot is a small mushroom, usually only a few inches tall. Its common names give away its key distinguishing feature: the stem (the mushroom’s “foot”) is bright yellow, its stem is hollow (like a tube), it’s funnel or trumpet-shaped, and it’s brightly colored (like a flame).

Yellowfoot mushrooms only grow from the ground or on decomposing logs; they never grow up trees or on solid logs. They grow in dense or scattered groupings across the forest floor, especially boggy, wet areas filled with lots of moss. The yellowfoot chanterelle is mycorrhizal (forms relationships with specific trees), with two species preferring conifers and one growing in association with hardwoods.

The yellowfoot, in addition to being mycorrhizal, also displays saprotrophic tendencies as it is always found around decaying material. Saprotrophic mushrooms decompose dead matter in the forest.

Because these mushrooms are so small, you need to harvest a lot to make a dish. But, that usually isn’t an issue because they appear in great numbers. Sadly, there aren’t many recipes online or elsewhere for these mushrooms.

Everyone is too focused on the more robust chanterelle to give this delicate mushroom a chance. We hope to see that change soon! If you forage these gems, we’d love to hear how you prepare them.

Yellowfoot mushrooms don’t need a lot of cooking; they fry up really quickly and can get a nice sear. They’re excellent as a pizza topping, used to bulk up mushroom soups, and sauteed with oil and garlic.

How to Forage Yellowfoot Mushrooms

Late summer to late fall. They’re especially abundant after it rains. In the Pacific Northwest, they often emerge Nov -Jan.

Yellowfoot mushrooms like shade and mossy, boggy locations. They’re usually in forests where there are many trees to block the sun. They will never be in fields or pastures; that is way too bright for them.

One species grows with hardwoods, and the others grow with conifers. All the yellowfoot chanterelles will grow in mixed forests, so don’t stress too much about specific forest groves. As long as their preferred tree species is nearby, it’s possible to find the yellowfoot mushroom.

The cap is orange-brown to yellow to brown, has false gills underneath, and has a yellow to yellow-orange stem. This is a small mushroom, averaging 1-4 inches tall with a cap half an inch to two and a half inches wide. It’s charming and sweet, like an orange dimple army popping up to say hi from the mossy forest floor.

The gills of the yellowfoot mushroom are similar to chanterelles but not precisely the same. They both have false gills – gills that do not separate from the cap easily. False gills look like ridges or folds. With a chanterelle, the ridges are linear, neatly arranged down the cap underside and partially down the stem.

With the yellowfoot chanterelle, though, the false gills are a bit less defined – they’re rather shallow and look more like veins than ridges. Sometimes the veins are straight and well-formed, while other times, they branch all out to create intricate random patterns.

The false gills usually run down the stem a little, but not always. It is more common in mature specimens. Younger yellowfoot mushroom false gills are usually contained under the cap.

When the yellowfoot mushroom is young, the cap is usually round and flat, the size of a penny or dime. The cap flares upwards to create a funnel or vase as they mature. The edges of the cap become wavy and irregularly shaped.

Yellowfoot chanterelle stems are slender and even (no bulging), yellow or orange. Sometimes, the stems are flattened or squished slightly. This usually happens when it’s pressed against a stick or another yellowfoot.

The flesh of the yellowfoot mushroom is delicate and thin. At the same time, it is somewhat waxy feeling. So, it’s not robust, but it’s not frail, either.

Yellowfoot mushrooms don’t have a strong smell, but you may notice a faint apricot or fruity smell if you find a bunch. Usually, the fragrance isn’t super noticeable in the woods, but once you’ve collected a bunch in a bag, the closeness intensifies the scent.

Even though yellowfoot chanterelles are tiny, it’s near impossible to miss their brilliant yellow to yellow-orange coloring. Just don’t pass them by if you see them – let the yellow be a beacon! Look in mossy areas, boggy spots, and any shady or sheltered location near the water.

Yellowfoot chanterelles never appear as just one – there will always be an abundant bunch to forage. And, they grow in the same place year after year, so mark it down!

Due to their delicate, hollow flesh, yellowfoot mushrooms will get squished if you put other mushrooms on top of them. So when you collect these mushrooms, take care with them. Bring along a small hard-sided container or separate bag to keep them safe.

This is also a good practice for separating other fragile mushrooms too, like black trumpets. A small plastic deli container or storage container with holes poked in it (for airflow) works great.

All three species go by the common name yellowfoot. Most people don’t make an effort to differentiate between them since they’re all quite similar-looking and all are edible. However, once you start looking closely, you can see the variability and how each one is unique.

This species is the most common yellowfoot. It occurs across North America, Asia, Europe, and Russia. The cap of C. tubaeformis is yellow-brown, slightly waxy, 0.5-2.5 inches wide, and flat with a depressed or funnel-shaped center. As it ages, the cap margins upturn and become uneven.

Underneath the cap, the false gills are paler in color than the cap – light or dark grayish brown. C. tubaeformis stems are hollow, yellow-orange, and 1-4 inches long.

This yellowfoot mushroom is extremely similar to C. tubaeformis, except it is brighter. Instead of gray or grayish-brown false gills, C. lutescens has pastel orange or creamy yellow false gills. The stem is also very bright orange, unlike C. tubaeformis’s yellowy-orange stem.

C. lutescens cap is 0.75-2.75 inches wide, and its stem is 1-2 inches long. The cap coloring is brown to orange-brown and funnel-shaped. Its stem is also hollow and is a vibrant orange.

This species of yellowfoot mushroom also grows with conifers and is often found in bogs and moss-covered areas. It appears in late summer into early fall in the Northeast, Midwest, and Appalachians.

This next species of yellowfoot mushroom also looks very similar to C. tubaeformis, with one clear distinction. It grows with hardwoods, like oak, beech, and birch trees. It also prefers mossy areas but does not grow in association with conifers.

The cap on this yellowfoot mushroom is bright orange to orange-yellow but fades with age to become dull yellow. Caps are 0.5-1.25 inches wide, and the hollow bright orange stem is 0.75-2.25 inches long. The false gills are pronounced, blunt, and pale yellow to pale gray. They usually develop a pinkish tint with age.

Gently pull the mushrooms out of the mossy duff. They come up easily, but they are delicate, so you need to be careful. The stems will usually have dirt attached to them – you can pinch off the bottoms or cut them, so you’re not getting a lot of soil in your collecting basket.

Yellowfoot chanterelles don’t keep long, so plan on using them soon after harvesting. Store the unwashed yellowfoot mushrooms in a paper bag in the refrigerator for not more than three days.

Yellowfoot mushrooms are relatively mild, with a slight fruity accent. The entire mushroom is edible, including the stem. To prepare them for the frying pan, all you have to do is cut off the end and give them a quick wash. They rarely get overly dirty, like chanterelles which are often caked in soil and debris. The waxy texture seems to deter debris from accumulating.

Try not to soak them too much – yellowfoot chanterelles absorb a lot of water and get quite soggy. If you get them overly wet, let them air dry or soak up excess moisture with a towel before cooking. The best way to wash them is to put them in a strainer and give them a quick rinse under the faucet.

Because they’re so small, yellowfoot mushrooms cook up quickly. They only need about 5 minutes in a hot sauté pan. Another great thing about yellowfoot chanterelles is that they keep their shape during cooking. They might deflate a little because they’re hollow, but they retain their overall shape.

As mentioned before, yellowfoot mushrooms are in the same family as chanterelles. They are similar looking, but it’s easy to tell them apart once you know what you’re looking at.

Yellowfoot vs. Chanterelle: What’s the difference?

Waxy caps are tiny like yellowfoot chanterelles, and there are some very bright yellow or orange species, so there is great potential for confusion. In fact, at first glance, it is challenging to tell them apart – they are approximately the same size, are almost identically shaped, and are brightly colored. Also, since yellowfoot mushrooms tend to have a waxy feel, the confusion only deepens.

Are yellowfoot mushrooms safe to forage?

Yes! There are no poisonous lookalikes to yellowfoot chanterelles.

Can I grow yellowfoot chanterelles at home?

No. Due to the symbiotic mycorrhizal relationship between mushrooms and trees, it is not possible to cultivate yellowfoot mushrooms. Science hasn’t figured out how to duplicate this yet.

Where do yellowfoot mushrooms grow?

The yellowfoot chanterelle grows in northern North America and across northern Europe and Asia. It doesn’t grow in hot climates; it prefers cool climates with sufficient rainfall.