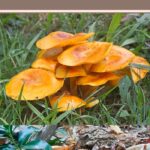 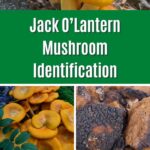 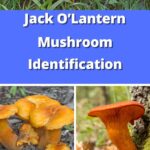 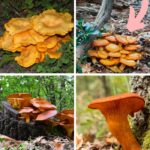 Omphalotus olearius is the Latin name for the interesting jack o’lantern mushroom. Famous for its bright color and bioluminescent properties, the jack o’lantern is also a poisonous mushroom.

This mushroom contains the toxin muscarine, which causes severe cramps and diarrhea. It is not deadly, but consuming this species may require hospitalization.

The problem is that the jack o’lantern mushroom is often mistaken for certain types of gourmet chanterelles. Given the popularity of the delicious chanterelle mushroom, poisoning yourself with a jack o’lantern can be a real concern if you’re not careful!

Follow this link for an in-depth article on chanterelle mushroom identification.

If you’re going to start hunting for chanterelle mushrooms, it’s important to know how to distinguish them from the poisonous Omphalotus olearius. A chanterelle mushroom identification lesson from a hands-on expert is encouraged. Never solely identify anything by what you’ve read on the Internet!

When I first learned to identify chanterelles the gills were described to me as having a “melted” appearance. I still love this explanation! I really do think chanterelle gills look more like melted ridges than real gills.

The best way for a novice to learn how to really distinguish between the two is to see them in real life. When mushroom hunting, take the time to compare any chanterelles in your area to a local jack o’lantern.

With a little practice you’ll never have an unpleasant surprise when hunting for chanterelles, and you may just get to see a jack o’lantern mushroom glow in the dark!