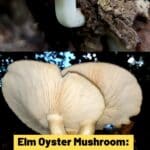 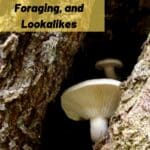 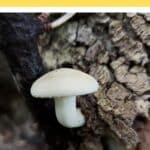 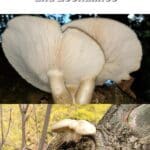 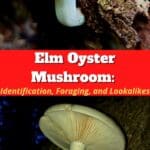 All About Elm Oyster Mushrooms

The Elm oyster grows primarily on elm trees, as you can probably figure out. The scientific name Hypsizygus translates to “high up yoke,” and ulmarius relates to the genus name for elms, Ulmus. It’s nice when the scientific names translate into identification traits!

Elm oyster mushrooms were first described to science in 1791 by the French botanist Jean Baptiste Francois Pierre Bulliard. He put it in the Agaricus genus, which is where most gilled mushrooms started out. Later on, it was moved to the oyster mushroom genus, Pleurotus, since it does look similar.

Then, in 1984, Canadian mycologist Scott Redhead moved it to Hypsizygus. There are two other species in this genus, including H. tessulatus, the beech mushroom.

Elm oysters are not as common as species of “real” oyster mushrooms, but they are widespread across the world.

The Elm oyster is a cultivated mushroom, though its cultivated version seems quite different from the wild one. Cultivated species with the Hypsizygus ulmarius name look very much like actual Pleurotus oyster mushrooms. Possibly this is something the growers have sought to develop? This confusion may be due to this mushroom being classified and cultivated as Pleurotus ulmarius until 1984, when it was moved to its new genus home.

Elm oyster mushrooms are a late summer or fall fruiting species. Sometimes, they persist into winter if it’s a mild season. Keep an eye open for them anytime from August through December. They don’t mind a little snow or frost – they hold up quite well and are still foragable when frozen.

This oyster mushroom lookalike grows on elm trees. It usually grows singularly or in clustered groups of 1-3 mushrooms. The Elm oyster may also be found on box elder or beech. It always grows from the tree; it never grows from the ground.

Very often, the Elm oyster grows high up in a tree on scars or wounds in the tree. This mushroom is a parasite and saprotroph, so it will infect and feed on injured and dying trees. It can be challenging to forage only because it’s often impossible to reach.

Elm oysters are very noticeable, extending out from an elm tree. They have large white or cream-colored caps and thick stems that stretch out perpendicular to the tree. Elm oysters look a bit like the tree is putting out a white umbrella.

The caps of elm oysters range from 2.5-6 inches in diameter. They are rounded and convex like an opened umbrella. As the caps mature, they sink in the center to flatten out or create a slight depression. The surface of the caps is smooth without decoration.

Elm oyster mushroom stems are white and bent or arched at the bottom. They’re 2-4 inches long, very thick, and solid. The stem connects to the center of the cap. Underneath the cap are white gills that may be very slightly decurrent (running down the stem) but not nearly as much as an actual oyster mushroom.

** Every guide I’ve read says Elm oyster stems do not have decorations on them. These guides indicate the stems are white and smooth. However, I’ve seen some images from foragers with what is definitely an elm oyster, and the stem has brown scales. I can’t speak precisely to why this happens, how common it is, or if it is the same species, but I want to put it out there to the mushroom universe. I think the stem can feature brown, scaled decorations, and I don’t know if that makes it a separate species or just an abnormality of the known species.

The flesh of the elm oyster is white, and it does not change colors when cut or bruised. Elm oyster flesh is tough and very firm. In overall appearance, Elm oysters are big, sturdy, and prominent.

Keep an eye out anytime you’re around elm trees, and don’t forget to look up. There is no real way to predict when they’ll appear, so you’ve got to just be observant while out in the woods.

Elm oysters are not a common mushroom, but they are widespread and occur across the country.

Cut the oyster off at the base of the stem. The stem is very tough and not really edible, so you can cut it off completely if you like.

The biggest lookalike is the other widespread Hypsizygus mushroom, H. tessulatus. These two are practically identical. The key differences are preferred tree species and cap appearance. H. tessulatus usually grows on beech, aspen, and cottonwood trees, and it frequently has watery spot marking on the cap.

Species in this genus look extremely similar to Elm oysters in appearance and how they grow from the side of trees. However, there is one key difference. They have a cup-shaped white volva at the base of the stem. Always look for this feature before foraging any mushroom you think is an Elm oyster to verify the identity.

In addition to culinary uses, elm oyster mushrooms are also being studied for other purposes:

What is the elm oyster mushroom?

This a delicious edible mushroom that can be used like other Oyster mushrooms. It is often incorrectly sold as ‘Oyster mushroom’ but it produces larger fruit bodies than other Oysters and does look different, too.

Some people report a seafood-like taste while others just say woodsy — it probably varies a bit depending on the environment it is growing.