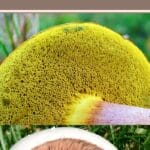 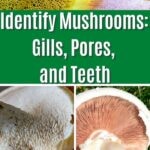 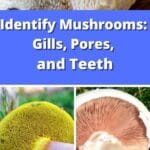 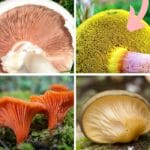 One of the more useful traits to examine when trying to identify mushrooms is their method of spore dispersal. This is simply the means by which the mushroom produces and distributes its spores.

The tissue that creates these spores (called the hymenium) is found on a few different types of structures. We’ll examine these structures individually starting with gills, moving on to pores, and ending with teeth (my favorite!). Finally, we’ll identify mushrooms that disperse spores without using gills, pores, or teeth.

Mushroom gills are the thin, papery structures that hang vertically under the cap. The sole purpose of these gills, called lamellae, is to produce spores. The spores are then dropped from the gills by the millions where they are scattered by wind currents.

Examining the gills is important when identifying mushrooms. Mycologists have many terms to describe gill structure, some very precise and complicated. Here are some of the more common features of mushroom gills:

Color and bruising: Note the color of your mushroom’s gills. Sometimes they will be very different from the cap color. If you apply pressure to them with your fingernail or a knife they may bruise a different color. These features can help you identify mushrooms with gills.

Gill spacing: Notice how many gills are packed into the underside of the cap. Is it crowded with many gills in one place or is there space between them? This can admittedly be hard to judge!

Length: Sometimes the gills may not run all the way from the stem to the cap. These are called “short gills” and may be helpful in making a proper identification.

Forking: Whether or not the gills fork (branch off from one another) can be another important factor when trying to identify mushrooms.

False Gills: Occasionally forking gills may fool you! The edible chanterelle has structures that appear forked but these are actually “false gills”. Unlike true gills, they are not separate features that can be individually picked off. Instead, they appear as melted folds on the underside of a mushroom. Learn to distinguish true from false gills if attempting to pick chanterelles.

A great way to safely examine mushroom gills is to buy some portobello mushrooms from your grocery store. This allows you to pick and prod at them to your heart’s content. You may see some recipes asking to remove the gills before cooking. This is not due to any danger but for aesthetic reasons. The gills tend to give a darker, grayish color to the rest of the meal, which may not look very appetizing!

Another structure used for spore dispersal instead of a gill is known as a pore. Mushroom pores appear as small holes on the underside of the cap.

These holes are actually the ends of a series of tubes within the mushroom cap. Spores are produced on the sides of these tubes and eventually, they are released where they fall down the tube, out the pore, and into the air. Wind, animals, and insects will further carry them from there.

When trying to identify mushrooms, be sure to note the pore surface. Traits such as color, pore size, and pore pattern may help indicate the species. A key or guidebook will help you narrow it down, although remember that certain features may change as a mushroom ages. (Don’t worry though, gills will never change into pores!)

Two common groups of mushrooms with pores are boletes (the Boletus genus) and polypores. Some quick characteristics of each:

Yet another method of spore dispersal is through teeth (also called spines). Tooth fungi have long, thin “teeth” that hang downward and produce spores. They have basically the same setup and function as gilled fungi; only the process is done through their spiny teeth.

Although there are fewer mushrooms with teeth than their gilled and pored counterparts, this group of fungi still contains some interesting species. The hedgehog mushroom (Hydnum repandum, photo to the right) is a popular edible closely related to the golden chanterelle. Another species are known as Hericium erinaceus (also called Lion’s Mane, Bearded Tooth, or Bearded Hedgehog) is a delicious edible with possible medicinal properties.

Tooth fungi are usually easy to tell apart from mushrooms with gills or pores. The teeth may hang down a few millimeters or even more than a centimeter! When trying to identify mushrooms, the presence of teeth will narrow down your search considerably.

Here are some mushrooms that don’t reproduce through gills, pores, or teeth:

So the next time you want to identify mushrooms don’t forget to look at the spore-bearing structures. How a mushroom reproduces can tell you a lot!