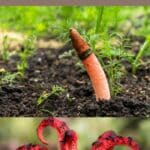 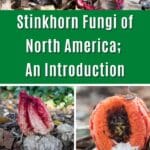 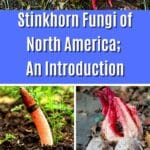 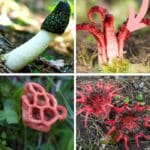 There are dozens of stinkhorn species in North America, all of which are stinky, bizarre, and bring up A LOT of questions. Chances are you’ve encountered one or two of these weird fungi along trails or in your garden. Many questions result from the shock of this outlandish “thing” suddenly growing in the yard, landscape mulch, or field. Stinkhorns love to pop up overnight, wow everyone with their design and atrocious smell, and then disappear as quickly as they arrived.

This guide isn’t going to cover all the stinkhorns in North America but will highlight some of the more common. We’ll also talk about eating stinkhorns – that’s right, some of these species are edible!

Stinkhorns are among the most asked-about fungi because they’re totally crazy looking, seem to appear overnight right in your garden or landscape mulch, and stink. Like, really, really stink. If you do run into one, please don’t pick it. Not because it’s dangerous but because you’ll spend days trying to scrub that foul smell off your hands.

All stinkhorn fungi belong to the Phallaceae family. Within this family, the stinkhorns occupy many genera. There are a lot of stinkhorns! As of a 2008 estimate, there are approximately 77 stinkhorn species across 21 genera.

The species within the stinkhorn genera all share two main commonalities:

Once you get beyond these standard features, the world of stinkhorns is incredibly diverse, wild, and even straight-up out-of-sci-fi-movie wacky. And, usually, quite disturbing. Who needs sci-fi when you have stinkhorns bursting out of the ground to terrify you??

Stinkhorns are saprophytes, which means they feed on decaying organic matter. They especially like mulch, and that’s why they’re so common in gardens, yards, and among landscaped areas.

The basics of stinkhorn anatomy start with an egg. When the stinkhorn first forms above ground, it is shaped like an egg. This oval fruiting body is gelatinous and either fully buried or partially buried in the ground. Quite often, you have to dig for it.

The egg’s outer layer (the peridium) is composed of 2-3 layers. The outermost layer is a thin, elastic membrane. The next layer is fleshy, thick, and gelatinous. In the center of the egg is the stinkhorn embryo form, which is the beginning of the mushroom body formation.

When you cut the egg in half, the outer layers are apparent, but the stinkhorn embryo is often super faint, depending on the age of the egg. As the fungus matures, the mushroom form becomes more apparent inside the egg. You might see the outline of a cap forming or a short stem.

As the fruiting body grows, it busts out of the egg. The egg may remain as a volva at the base of the stem. Or, many times, evidence of the egg beginning is lost in the growth process.

When the fungus is ready to release spores, it produces a very, very (very!) horrible-smelling slime. Their perfume is reminiscent of decomposing flesh or dung. This slime attracts flies, beetles, and other stink-loving insects. These bugs land on the stinkhorn and happily eat up the slime. As they’re perched there feasting, their feet are also immersed in the slimy goop. Once they’ve had their fill, the insects fly away, spreading spores from their feet and digestive tracts. And so, the stinkhorn continues its life cycle.

There are many stinkhorns native to North America, but also a few that are introduced. Stinkhorn spores love to travel, and some have traveled across oceans and continents, along with the spread of mulch, trees, soil, and sod.

Are Stinkhorns Dangerous to People, Pets, or Plants?

No. To all of these. Stinkhorns are not poisonous, dangerous, or otherwise problematic. Yes, they may look freaky, but they aren’t going to harm you, your pets, or your yard. Just let them be; they’ll disappear quickly enough.

You can try to get rid of them if they really bother you, but picking them isn’t going to do it. All fungi emerge from mycelium deep in the ground. You’d have to dig up your yard or garden to prevent them from appearing again. So, you can destroy the yard by attempting to remove the mycelium or let them live their short, stinky lives and move on.

The only danger these happily phallic-shaped fungi pose is potentially to your innocence or delicate sensibilities.

Due to the unique and unusual appearance of so many species in this family, there is no overarching way to identify a stinkhorn. However, upon investigation, all stinkhorn species share two characteristics.

The Mutinus stinkhorns are among the most widespread. And, generally, they’re easy to identify because they look like a penis. Most people akin their likeness to a dog penis, which is pretty accurate. It’s pretty bizarre just how much they resemble a penis — I think Mother Nature must have a sense of humor.

Mutinus caninus (literally, dog penis) is the type species of this group. It frequently appears in North American mushroom guides and sources, but, as is so common (and if you’ve read anything on this website, it comes up A LOT), this turns out to be a specifically European species. M. caninus does not occur in North America, or, at least, not naturally.

As you might be able to guess from the genus name, this group of stinkhorns are phallic (penis)-shaped. The Phallus species differentiates itself from other phallic-like stinkhorns with its rather spectacularly accurate shape. There is always a long, upright, evenly cylindrical stalk with a bell-shaped cap on top. And, to top it off (literally), is a round open upraised circle at the very top of the cap, which is where the cap meets the stem. It looks like lips pursed to whistle or exude something gross.

Some of the species in this group even get a little fancy, producing a lacy net-like growth around their stalk.

Impudicus is from the Latin for immodest or shameless. This stinkhorn is an especially fast grower, sometimes growing at a rate of 4-6 inches per hour. It exerts enough force to push through asphalt!

This species looks extremely similar to P. rugulosus, described above. It is challenging to know the exact range of this species since it is often confused. It is thought to be a southern and southwestern species, while P. rugulosus is primarily a northern species.

Phallus rubicundus has a lighter-colored stem that is more pinkish-red to pink, not usually bright reddish-orange like P. rugulosus. The stem is often slightly swollen in the center. It fades to light orange.

There are only a few species in this group, of which only one occurs in North America.

This is a fantastically weird-looking stinkhorn species. It looks like a red sea creature with many tentacles stretching out. It is also commonly known as the starfish fungus and sea anemone fungus.

This stinkhorn species is known for its short, chunky arm-like bodies that reach up from the ground like claws. There are 19 species in this family, with three appearing in North America. Most of them are found in tropical areas.

Also known as the chambered stinkhorn.

This species is all jumbled up. The scientific name in the quotations above has been used widely and for decades to describe this pinky-orange basket-topped fungus. However, a 2018 DNA analysis clearly puts that scientific name with a yellowish or white-stalked species from Asia and Africa. This leaves the orange type without a name or precise definition. For now, the commonly assigned name is in parenthesis, but we expect that to change sometime in the near future.

When you see a fungus from the Clathrus genus, you’re not likely to forget it easily. These fungi are creepily alien-looking!

There are three species in this genus, with only one appearing in the United States.

This genus contains three species, set apart from other stinkhorns by their tissue hats.

Gallery of Stinkhorn Mushrooms Around The World

Interested in learning about other bizarre fungi species? Check out our guides to: 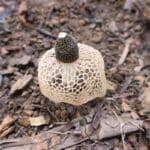 Due to the overpowering offensive smell, most people don’t think about eating them. However, they are eaten as a delicacy in many countries.

The immature egg form is said to be a bit crunchy and reminiscent of radishes. At this stage, they don’t smell like death. The taste and smell vary widely by species; some taste muskier, while others taste rather plain or pleasant.

Mature basket stinkhorns (Phallus indusiatus) are a delicacy in Asia. There, they are known as bamboo mushrooms and are thought to be an aphrodisiac.

The cooked stinkhorn body is said to be tender, fresh, and fragrant. Bamboo mushrooms are commonly found in Asian markets as dried stalks; the smelly caps are removed during harvesting. Preparation includes rehydrating them, and then they are used in stir-fries and soups.

There is no definitive guide (that this researcher could find) about whether ALL stinkhorn species are edible. So, to be safe, you should absolutely identify the species first before eating them.