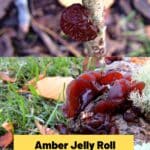 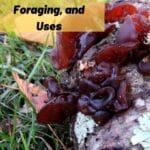 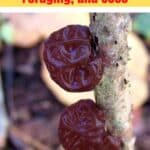 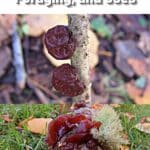 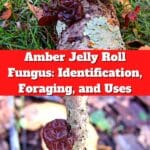 This brownish jelly fungus is an extremely common winter mushroom in North America and around the world. Amber jelly roll fungus (Exidia crenata) fruits throughout the year, not just in winter, though, and is an edible species. If you’re unfamiliar with the amber jelly fungus, it’s an excellent one to learn due to its prevalence. It may not be something you seek out to eat, but hey, if the world and food systems collapse, you’ll be prepared!

Note: Most foraging guides, publications, and online resources list the North American amber jelly roll as Exidia recisa. This, as it (not surprisingly) turns out, is a European species. All the notes and descriptions are the same and accurate, but the scientific name has been updated to reflect this North American species accurately.

All About Amber Jelly Fungus

Other common names for this gelatinous fungus are Jelly Roll, Amber Jelly, Brown Witch’s Butter, and Willow Brain. It is known as the willow brain because the original species described grew on a willow tree. Initially, the species was named Tremella recisa but was transferred in 1822 to the genus Exidia.

Amber jelly roll fungus is a wood-rotting species. It eats and decomposes dead or dying wood.

It occurs year-round but is more common in fall and winter. In many regions, it is widely known as a winter mushroom.

While this fungus grows all over North America, it is more common east of the Rocky Mountains.

The fruiting body of the amber jelly roll fungus is light to dark brown, and it isn’t uncommon for them to look almost purplish. Each fruiting body grows separately; however, they usually grow in dense clusters that make it hard to distinguish between them. The individual caps average .25-1.5 inches across.

Their gelatinous nature is jelly-like but not as squishy as some other similar fungi. Amber jelly roll fungi feature concave depressions on their surface with pronounced ridges around them. If you press the fungus between your fingers, it will squish but also mostly retain its shape.

The stem of the fungus is more like a minuscule protrusion that attaches the fungus to the wood. It looks like a part of the amber jelly was pinched when it was attached to the branch. The entire fungus is smooth – there are no decorations or markings.

Amber jelly rolls will dry out in drought, shrinking until it’s almost nonexistent. When it rains, they’ll reconstitute right on the branch. They’re quite hardy fungi!

This gelatinous fungus is often confused with the amber jelly roll because they are of a similar color. Wood ears, though, have a more obvious structure and look very much like ears. Amber jelly roll fungus doesn’t have that ear shape. Even though it does have clearly defined ridges, there isn’t the same concave depth or depression. Amber jelly fungus depressions are much more shallow and plain. Amber jellies are the mini-me of wood ears.

This guide explains the wood ears of North America. Wood ears are an edible and highly valued mushroom, especially in Asian cuisines.

This fungus is much, much darker than the amber jelly roll. It is black, gelatinous, and blobby and fuses together into long stretches of fungi. It is most common in spring, although it does fruit year-round. This fungus is also super common across North America.

As the common name suggests, the appearance of this gelatinous fungus is leaf-like. It looks more like a head of lettuce, with multiple fronds tightly clustered and protruding upwards. It is also much more squishy and watery than the amber jelly roll. Leafy brain fungus is a mass of wavy, very squooshy, irregular gelatinous goop. It doesn’t have the well-defined ridges of the amber jelly roll and doesn’t keep its shape when squeezed.

The taste and texture of this mushroom are both rather unremarkable. It is bland with a rubbery consistency. When cooked, it retains its rubberiness, which is fine because it adds texture. It works well in many dishes because the blandness allows it to soak up the flavors of whatever it is cooked with. Try adding it to Pho, miso soup, or any brothy soup or stew. They’re excellent with a noodle dish like soba.

You can cook the mushrooms whole since they aren’t that big. Or, to break up the rubbery texture in the dish, slice them thin.

Amber jelly roll fungus is also great dehydrated. It stores well this way, and you can dehydrate them as needed.

There are accounts on Reddit of soaking the fresh, cleaned mushrooms in a sweet syrup overnight and then dehydrating them. The mushrooms take on a dried cranberry-type texture and can be used the same way in salads, cookies, and bread! You can soak them in plain simple syrup or flavor the simple syrup with lemon or orange juice.

This is a great little video about cooking amber jelly roll fungus; the kids call it “crunchy jello,” which is hysterical and highly accurate!

Are all jelly fungi edible?

Poisonous jelly fungi are uncommon but a lot of species are unpalatable, either texture or taste. It’s best to identify the jelly fungus species first before deciding to taste it. Caution keeps mushroom foragers alive!