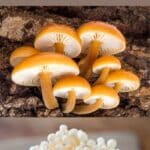 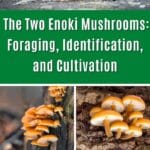 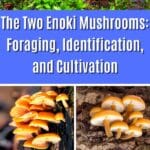 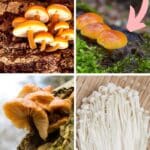 Enoki is becoming more common in supermarkets across America, and with good reason. Their seafood-esque flavor and crisp texture are remarkable. However, if you’ve seen this cultivated enoki in the store, you may be shocked to see what the wild version looks like (and vice versa)!

Enoki mushrooms (Flammulina sp.) are delicious, both wild-harvested and cultivated, and are an excellent mushroom to know for the woods forager and the supermarket shopper (forager :-).

Wild enoki mushrooms grow all over North America, Europe, and Asia. Until recently, it was believed all these species were the same: Flammulina velutipes. However, just recently (2018), DNA sequencing put the Asian species as separate, and it is now named Flammulina filiformis.

But, even though the European/North American and Asian species are genetically different, their wild forms look almost identical. And the wild form still looks completely and utterly different than the cultivated style.

Enoki are cold-weather fungi with reddish brown caps, a velvety stem, and white to pale yellow gills. They grow on trees, both alive and dead or dying ones, and often appear in dense clusters.

The wild enoki is rather unremarkable with its brownish coloring, simple mushroom structure, and nondescript appearance. Several other mushrooms look just like it, which makes foraging wild enoki problematic. One very dangerous lookalike, the deadly Galerina, is also brown with gills and grows in groups. This is a very unfortunate and hazardous lookalike for the wild enoki!

If you want to forage flammulina species in the wild, you must be 150% certain of your identification and do a spore print. Every. Single. Time. Do not mess around with this one. Wild enoki is not for newbie mushroom foragers and should always be gathered with caution.

In complete and almost unbelievable contrast to wild enoki, cultivated enoki mushrooms are pure white – white cap, white gills, and white stem. They are also very long and spindly, with stems like spaghetti and a cap smaller than a thimble. They’re grown in very dense clusters and harvested in clumps.

Enoki fungi were first cultivated in China in 800 A.D. They’ve been a staple in Asian cuisine for centuries, where they’re popular in soups, salads, and as medicinal mushrooms. They have only made their way onto North American plates and palates in the last decade.

The name enoki is from the Japanese word for this mushroom, enokidake or enokitake. In Mandarin, the mushroom is jinzhengu, or the “golden needle mushroom.”

What’s In a Name: Flammulina Species and Naming

There are approximately 10 species of Flammulina in the world. The most well-known was the Asian, European, and North American type, Flammulina velutipes. This species was known as enoki in Asia, Velvet Shank in the U.K., and by a host of other names in other parts of the world. But, since it was being cultivated in Asia and widely eaten there, the name enoki stuck. Flammulina velutipes and enoki were one and the same.

Then the 2018 DNA analysis happened, which determined the Asian variety is actually different – it is genetically separate. And that, in turn, means that the cultivated enoki is not Flammulina velutipes, either. This new information makes the standard naming conventions a bit more complicated.

What do you think? Velvet foot? Velvet shank? Something completely different? Another common name is winter mushroom since they often appear in winter. As you can see in this guide, I’m calling everything enoki because that’s the most used name at the moment. But I’m guessing in the future, I’ll need to update this.

Cultivated enoki mushrooms get their vastly different appearance from their unique growing conditions. The mushroom spores are inoculated into sawdust and packed into glass, clay, or plastic bottles with narrow tops. The containers are usually around 8″ tall and are placed in total darkness.

The end result is a clump of pure white, very thin mushrooms packed together so tightly that they almost have to be peeled apart. They get their slender size because of the growth constraint of the bottle. And the pure white is because they are grown in the dark.

Enoki grow quickly, going from spawn to harvest in as little as 30 days. The harvested mushrooms are sold as clumps, so you get a dense bunch of enoki when you purchase them. They can be separated into individual pieces or cut up and used as is, still condensed together.

While enoki has been cultivated for a very long time, the process actually mimics something that happens in the wild. When the newly emerging fruiting bodies are trapped underneath tree bark, they don’t have adequate room to spread out and ultimately spread their spores.

So, they switch their form to become optimal spore-releasers. The mushroom will stop devoting energy to cap growth and coloring and instead focuses on a long, thin stem and reaching out to open space where it can release spores. Once the mushroom reaches open air, it reverts back to “normal” growth.

This is not a mushroom for beginner mushroom foragers. It very closely resembles the deadly Galerina, which is as deadly as the name implies. Don’t take chances with this one!

There are five species of Flammulina in North America. They all look pretty similar in the wild, with just a few minor differences. Usually, the tree species is the best determiner of fungi species.

As far as we know, all five species are considered edible. This is only because, before DNA testing, everyone called the mushrooms the same thing – velvet foot, enoki, or whatever common name they preferred. And, it is reasonable to assume all the species were gathered and consumed under the same broad umbrella designation of Flammulina velutipes.

The Four Other Flammulina Species look the same, with these minor differences:

This guide to Galerina marginata will also help with the differences.

Other species with fuzzy stems that could be confusing are:

Clustered brown mushrooms that look similar to enoki include:

While the galerina and enoki look similar, once you learn the differences, they become pretty easy to tell apart. However, it is still essential to do a spore print and do it on every single mushroom. This is because galerinas could be growing right next to enokis, and you could collect them all together without realizing it. This is especially a problem if you’re in a rush.

Mushrooms don’t like playing by easy rules. I’ve seen poisonous and edible species (not enokis, but others) growing on the same tree within inches of each other – a moment of inattention, and you’ve tossed the poisonous ones in the basket alongside the edible.

Take your time with this one. Do the spore prints. And if you have even the slightest hesitation, toss it out. I’m assuming you’re not dying of starvation, so there is absolutely no reason you must eat the mushroom. Make good choices!

Can you eat enoki mushrooms raw?

Yes, you can. In Asian cultures, enoki are often eaten raw (just like our common button mushrooms). However, just like with any fresh vegetable or fruit, they are subject to contamination due to improper packing processes.

Like spinach and romaine lettuces have had their callbacks, so have enoki mushrooms. Just last year, a bunch of people got ill after eating raw enoki that was contaminated by listeria.

We recommend cooking all mushrooms.

Do enoki mushrooms have medicinal properties?

Enoki are high in fiber, antioxidants, and B vitamins. They may help support heart health, brain function, immunity, and more, but that is still being researched.

« Can Mushrooms Save The Planet?
Wood Ear Mushrooms: Identification, Foraging, and Lookalikes »