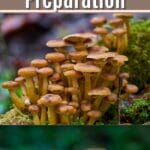 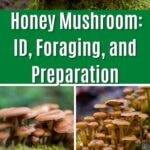 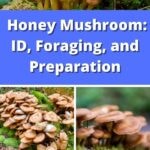 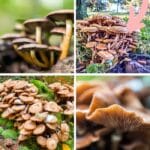 The term honey fungus may sound tasty, but not everyone is a fan of these honey-colored mushrooms. A voracious consumer of both living and dead plant matter, finding them in your garden could signal a serious problem.

These mushrooms belong to the genus Armillaria, which is made up of different species of parasitic fungi that love to feast on wood. They cause a white rot in trees and plant roots that can be quite destructive.

The fruiting bodies of the fungus, known as honey mushrooms, may not be welcome in the garden but they are at the dinner table. Many people enjoy their nutty and sweet flavor, and their chewy texture also allows them to remain firm during longer cooking times.

Do You Have a Honey Mushroom?

Honey fungus identification can be very difficult. There are many look-alikes, several of them quite poisonous.

I strongly encourage showing any honey mushrooms you find to an expert before eating them if you’re not experienced. Don’t rely solely on what you’ve read here. This is not a beginner mushroom.

White. I’m mentioning spore print first because taking a spore print is essential when identifying honey fungus. This will help you eliminate the possibility that what you actually have is the deadly Galerina marginata, which has a brown spore print.

The caps are convex to flat once mature, around 1 – 4 inches across. Colors range from yellowish to varying shades of brown. Some species have scales on the cap.

Long and whitish with a ring around the upper stem. This ring is a remnant of the partial veil, the piece of tissue that covers the gills when young. There is no bulb around the base of the stem.

Another important honey mushroom identification feature is the attachment of the gills. They should be attached directly to the stem and sometimes begin to run down it. Always inspect the gill attachment on these mushrooms. 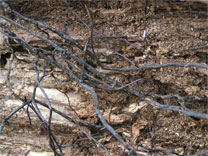 Rhizo-what!? Honey mushrooms infect trees and plants by sending out long, black cords are known as rhizomorphs (see picture at right). They twist and turn like tentacles.

You can usually find the rhizomorphs by looking at the surface of nearby trees or logs. Do note that the presence or absence of them does not guarantee correct identification. A spore print should still be taken!

Yes, these mushrooms are edible. They have, as you can imagine, a slightly sweet taste along with a chewy, first texture. 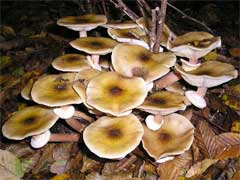 Yet despite the appealing name, these mushrooms can also be slightly bitter and are known to cause some gastric distress. That’s why many people recommend parboiling them for one or two minutes before cooking. Parboiling is the process of partially cooking something in boiling water but removing it before it cooks all the way.

To parboil honey fungus, fill a pot with water and bring it to a boil. Toss in your mushrooms and let them cook for one minute, two tops. Then drain them and run cold water over them so they don’t cook further and become mushy.

Parboiling removes some of the stomach irritants and bitterness. After that they can be wiped off and sliced for cooking. The stems of these mushrooms can be quite tough, and some people prefer to discard them.

Honey mushrooms go well with pasta dishes, stuffings, and soups. Adding them to French onion soup will create a wonderfully earthy/sweet taste to the soup’s normal saltiness. They’re also good when sauteed on their own.

Be sure to cook these mushrooms well, as they may still cause you to get sick. Also, only eat a small amount if trying them for the first time.

As you can see, the honey fungus is comprised of some fascinating species!

If you need a good mushroom identification book, check out the National Audubon Society Field Guide to North American Mushrooms.