Yet did you know that all three belong to the same species, Agaricus bisporus? Cremini, also known as crimini mushrooms, are simply a different strain than the white button. Developed by commercial growers, they are brown in color and have a slightly deeper taste.

Growers also created the concept of portobello mushrooms to sell mature cremini. A portobello is just an older mushroom that has grown until the cap has expanded. That’s why cremini are often labeled as “baby portobello” or “baby bella”. Ah, advertising!

Let’s take a closer look at these hearty mushrooms. We’ll start with some basic facts, and move on to medicinal and culinary uses. Hopefully this information will make you hungry, so we’ll end with some cremini mushroom soup recipes.

Although not famous medicinal mushrooms like their reishi or maitake cousins, cremini do appear to be beneficial to the body.

There’s evidence that Agaricus bisporus inhibits aromatase, an enzyme that contributes to estrogen production. By controlling estrogen levels, the risk of breast cancer is lowered. See this page for a brief write up on a study done on decreasing tumor cells. (Be warned it contains harder science than some may have an interest for).

Beyond medicinal, the main uses for these mushrooms are culinary. These are famous edibles, and good for you as well. They’re known to contain:

These health benefits, along with great taste, make cremini mushrooms a welcome addition to many meals. Use them with eggs, meats, or vegetable dishes. They’re also excellent in soups, gravies, and stir-fries.

Another aspect that makes them great for cooking is that they’re very common in grocery stores. You won’t have to spend a day in the woods to have them for dinner, although I admit that is part of the fun!

Once purchased, store them in the refrigerator in a paper bag for up to a week. Never store mushrooms in plastic, as plastic doesn’t “breathe” and you’ll soon experience great disappointment when your mushrooms are mushy and gross. 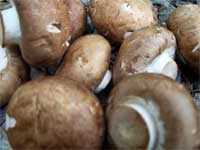 A final note on eating cremini, do be aware that Agaricus bisporus contains small amounts of toxins (gyromitrin for example). These toxins are rendered to negligible levels by heat so always cook your mushrooms. Many sources will tell you it’s safe to eat them raw, but the truth is it’s best to cook your mushrooms.

Don’t let that turn you off too much. Once cooked, mushrooms are quite safe. People have been eating them for years.

To get you started, I’ve included two delicious mushroom soup recipes below!

Heat oil in large, non-stick pot over medium-high heat. Sauté onion and garlic together for about 3 minutes.

Add mushrooms, cook for about 7 minutes.

Stir in red pepper, tomatoes, and broth. You can purée the tomatoes first if you like, although I prefer them whole. Bring the entire mixture to a boil.

Reduce the heat to medium and simmer for about 10 minutes. If soup gets too thick add a small amount of water at a time.

(This recipe is based on one from the USA Rice Federation).

In a large, non-stick pot melt the butter over medium-high heat. Add mushrooms, onion, and garlic and cook for about 10 minutes.

Allow mixture to cool slightly, and pulse in a blender with 1 cup broth and 1 cup rice. You want the mixture to be chopped, not pureed.

Put the mixture back in the pot along with the rest of the rice, broth, and any additional water. Bring to a boil, and then cook uncovered over medium heat for 5 minutes.

Once the soup cools, add salt and pepper as desired.