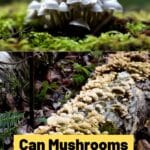 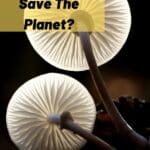 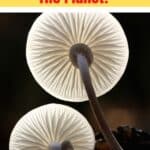 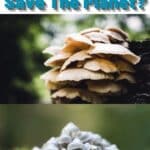 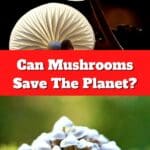 The fungi kingdom holds vast treasures and secrets that we are only just now starting to truly explore. Could mushrooms save the planet? — this is still yet to be discovered, but we do know they are an essential element of nature, the ecosystem, and possibly our own survival.

Of course, we shouldn’t overstate it. There is no miracle cure or method here – mushrooms aren’t the be-all and end-all. But, they possess many components that can improve our world, lessen human impact on the natural world, and possibly keep us healthy.

The possibilities seem limitless, from reducing the side effects of cancer to cleaning up oil spills and providing essential nutrition along the way. At the very least, the possibilities are intriguing!

Mushrooms That Clean Up Oil Spills and Decontaminate Water

Using mycoremediation (a term coined by Paul Stamets, which means “fungi-based bioremediation methods used to decontaminate the environment“), mushrooms are increasingly considered feasible components in cleaning up pollution. You can see the potential for fungi in this role in everyday growth.

Mushrooms can grow through plastic, floorboards, and around cement; they’re tough, resilient, and aren’t phased by many human creations. However, it is what they do in the process of growing that makes the most significant difference.

Mushrooms naturally use and take nutrition from many materials. They use natural enzymes to break down these substances and turn them into bioavailable fungi food.

In fact, fungi have a unique superpower in that they can break down hydrocarbons, including oil and plastic hydrocarbons. There are 120 identified enzymes that work to break down the toxins, but it doesn’t end there. When soil is treated with fungi, it is renewed and reinvigorated in addition to being cleaned. Therefore, it isn’t just being remediated; it is also available to use for other purposes.

Here are some current and past projects researching the ability of fungi to combat pollution:

A Nutritious Food Source With a Low Environmental Impact

Mushrooms are yummy food, but there is more to them than just flavor. Mushrooms are high in nutrients, too. And now that there are such accessible options for cultivating them, mushrooms can truly revolutionize our current food system. Will mushrooms save the planet by providing an economical, low-impact food source for our ever-growing populations?

Mushroom growing uses far fewer resources (land, water, processing) than most meat sources. A harvest of oyster mushrooms can be ready in as little as 12-14 weeks from the initial inoculation. Additionally, they quickly go from harvest to table without additional processing or resource use. This is vastly different from meat sources that require slaughterhouses.

Interesting fact: Germany cultivated oyster mushrooms during WWII for food. They were used for subsistence because rationing was in full effect. Oyster mushrooms provided incredible nutritional value and grew quickly and easily.

Can oyster mushrooms save the planet on their own? It’s seems like they’re the star to the wood chain and mycoremdiation processes!

Can Medicinal Mushrooms Save The People?

Mushrooms have been a staple part of traditional and Eastern medicinal practices for centuries. Only recently have western countries and researchers started investigating certain mushroom species’ medicinal potential.

The potential of mushrooms is incredible. There are over 10,000 species of mushrooms around the world, and there are likely many more to be discovered. The mushrooms’ importance as a food source, medicinal, and earth cleaner is only now being recognized.

Will mushrooms save the planet through one of these functions, or something we haven’t discovered just yet? We can’t wait to see what else the fungi kingdom has in store for us…as long as it’s not zombie parasitization!

Can Mushrooms Save The Planet Common Questions

Where can I learn more about medicinal mushrooms?

I highly suggest doing thorough research before assuming any mushroom can solve medicinal issues. There is a LOT of pseudoscience out there there. OR, more often, hopeful science.

Yes, there is a long history of using mushrooms as medicine. We also used to have cocaine in CocaCola and prescribe bloodletting for every ailment. Just because a practice is old, does not mean it is effective!!

Be responsible for your own choices; be skeptical of miracles. And don’t let people in positions of power in the fungi world lead you to accept their hypothesis as facts :-). Some people talk and teach medicinal mushrooms with a cultish enthusiasm that is suspect, to say the very least.
Try starting here https://www.cancer.gov/about-cancer/treatment/cam/hp/mushrooms-pdq and read the cited articles.

« Guide to the Cordyceps Mushrooms of North America
The Two Enoki Mushrooms: Foraging, Identification, and Cultivation »