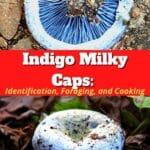 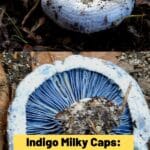 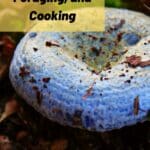 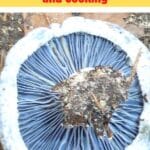 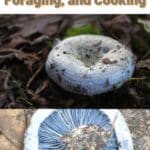 These stunningly bright blue mushrooms aren’t just a beautiful woodland find but also a superb edible species. Indigo Milky caps (Lactarius indigo) are widespread across eastern and southern North America and especially prevalent in the Appalachian Mountains. The indigo milkcap mushroom is easy to identify, making it a great beginner mushroom…if you are lucky enough to find it!

All About Indigo Milky Caps

Indigo milk cap mushroom caps range from bright blue to a somewhat subdued blueish-gray cap, and this colorful cap hides a beautiful surprise underneath. The gills are brilliant blue, and when you cut them, they bleed a deep blue milky latex substance.

This blue mushroom is somewhat rare in appearance, and many thought it to be the only one with this particular deep blue-violet milky latex. However, just recently, in 2007, five new to science species were reported from Malaysia.

Blue milk mushrooms are sought after by foragers due to their choice edibility. However, not everyone agrees on their desirability. Some mushroom hunters report it as mediocre, citing a bitter or peppery taste and grainy texture. It may be that specimens in different regions have various bitterness or peppery qualities. The range and habitat for this species are rather diverse, so it makes sense its taste might be as well.

It wouldn’t be surprising to learn, after some intensive DNA analysis, that there is actually more than one species. A smaller variant of the blue milky cap is already differentiated (unsure if it is scientifically DNA separated). It is known as Lactarius indigo var. diminutivus, the smaller indigo milk cap. The caps on this type don’t get larger than 3 inches in diameter with a stem averaging .5-1.5 inches long.

It is not unheard of for a Lactarius species to be bitter or spicy. Many milky caps are inedible due to their bitter taste. And, the peppery milkcap is appropriately named – it will burn your tongue.

The great thing about indigo milky caps is their long fruiting season. In many areas, they will appear starting in late spring and continue through late fall.

This mushroom is used to dye cloths. To learn more about dying with indigo milkies, check out this article. If you’re interested in learning about using mushrooms as a natural dye, International Mushroom Dye Institute is a phenomenal resource. Indigo milkies are even being used as a dye for cellular biologists.

In Honduras and Mexico, this mushroom is collected and sold in markets.

June through October, depending on region and climate.

The indigo milk cap grows in the eastern, southeastern, and southwestern United States. It can be found in Texas and Arizona but does not grow on the West Coast or Pacific Northwest. They’re also found in East Asia, Central America, and France.

Blue milkcaps are mycorrhizal, forming mutualistic relationships with their preferred tree species. Because of this, they’ll always be found around trees. They seem to prefer recently flooded floodplains. They grow from the ground, never on trees or from dead wood.

Indigo milkies grow in mixed habitats, sometimes preferring oaks and, other times, pines. There is some speculation that they’re more common around pines, but they definitely grow with oaks and other hardwoods, too. Other trees they’re known to associate with include American hornbeam, Mexican alder, and Mexican pine.

Usually, where one is growing, others will be scattered nearby. Blue milkes tend to grow in sporadic to dense dispersed groupings.

The cap of the indigo milkcap is medium to deep blue – think smurf blue! When the cap is at its brightest point (usually when young and fresh), you may think you’ve run into a smurf home. It starts out flat or slightly convex with an inrolled margin (margin folded under). The rolled margin is a common characteristic of milky caps in general.

As the caps age, they take on a grayish hue, turning the bright blue into a muted gray-blue or silver-blue appearance. The shape of the cap also transforms with age, lifting upwards to create a vase shape. It is also not unusual to see brown, stain-like markings on top of the cap.

The blue cap coloring usually appears in concentric zones, although there isn’t always a difference between the colors in the zones. More often than not, though, the circular markings are very distinctive, with darker blue lines across a paler gray-blue background.

The cap ranges in size from 2-6 inches in diameter. It also stains green when handled or bruised.

Indigo milk cap mushroom stems are .75-3 inches long, equally thick, and grayish blue in color. They are hard, hollow, and brittle. If you break it, it will snap or fall apart. The stems usually have pockmarks down the length.

The gills of the indigo milky cap are bright blue to grayish blue. When sliced, the gills bleed a deep indigo blue that slowly stains green(ish). The green happens when the latex is exposed to air. This is a telltale sign you’ve found a blue milky cap.

Milky cap latex does dry up with age, though, so on older specimens, there may not be any milk exuded or very little. Evidence that it did bleed at one time is generally apparent, even if there isn’t any milk. The gills will be stained darker blue or blueish-green to greenish-yellow.

Indigo milky cap flesh is white but turns indigo blue rather quickly. The blue will then turn slowly greenish.

Milky caps like lots of rain and good rich soil. Bugs love them so it’s often quite challenging to find milky caps that are even worth foraging. Slug-ridden, bug-infested indigo caps are a common disappointing find.

Try looking for this edible mushroom a day or two after good, heavy rains. All milkcaps (and there are many species!) tend to like similar habitats, so if you see another milkcap species growing, know it could be a place to look for the indigo milkies, too.

There are several blue mushrooms in the fungi world, but this one has some key telltale points which set it apart from others.

Blewits, as the common name suggests, are blue. But, they tend to be more lavender, deep purple, or light blueish than the brighter blue of indigo milky caps. In overall appearance, they aren’t that different from Lactarius indigo. The big difference is blewits are not milky caps, and therefore do not bleed any latex. So, cut the gills to be sure.

Blewits are an excellent edible, so if you do find this one, keep it and mark the spot. Most people would be very thrilled to find blewits instead of indigo milky caps. The spore print is whitish to pinky-beige.

There are several Cortinarius species with deep purple caps that may get confused with the indigo milk cap. When young and fresh, these Cortinarius species’ color is vivid and definitely purple, not blue. However, as the fungi age, their colors fade and might cause confusion. Corts are not edible, and some are actually quite toxic.

There are several key tells between corts and indigo milky caps. Cortinarius species always have a bulbous stem base, while indigo milkies are straight. Additionally, their gills don’t bleed. Finally, corts start out with veils around their gills which then break apart with age, leaving behind white webbing-like material around the cap edge and gills.

This is an edible mushroom, but possibly not choice – taste descriptions vary from mild and pleasant to slightly peppery.

It is easy to differentiate this species from the blue milky cap by cutting the gills. While the caps are a similar blue or bluish color, the gills on L. paradoxus bleed red, not blue. This is an edible species with a mild taste.

The flavor of indigo milky caps is mild to bland to slightly spicy. People who have eaten this mushroom report a wide range in tastes, from mild (and possibly “boring”) to peppery and not enjoyable.

It is a good idea to taste test a tiny bit before adding this mushroom to any dish. You don’t want a peppery surprise. Or, be expecting peppery and get bland. A nibble and spit test is fine to do.

Indigo milky cap mushrooms WILL stain your food green. So, either prepare them in a dish where it won’t show, or be prepared for some interesting colored food. When you saute the mushrooms, they’ll lose their brilliant blue coloring.

It is possible to keep a lot of the signature coloring by blanching them first, but this prevents some of the fine flavors that come from sauteeing in oil or butter.

In Honduras, the indigo milky cap is known as chora and is prepared with eggs. You can use the indigo milkies in any recipe that uses saffron milk caps.

For those seeking an otherworldy experience, I’m sorry to inform you that the indigo milky will not take you there. That is, unless finding a culinary mushroom is exhilarating enough to blow your mind.

They’re not rare, but do tend to be an uncommon find. They have a widespread growing range, but finding them each season can be challenging. And then, when you do find them, it’s a whole truckload (slight exaggeration…). So, if you do find this beautiful gem, treasure it!