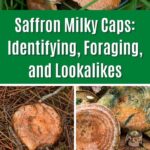 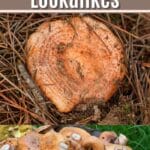 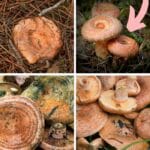 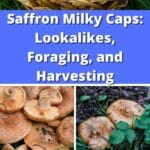 Have you seen the mushrooms that “bleed” a milky latex substance when cut? Milky caps (Lactarius sp.) are easy to identify due to this unique feature. Not all milky caps are edible, but the eatable ones are simply wonderful. The saffron milky caps (Lactarius deliciosus var.) are top edibles among milky caps species –there’s a reason their scientific name includes the word delicious!

This guide is only for the saffron milky caps of North America, so named because of their orange caps and milky orange latex. There are other milky caps with orange caps, so it is essential to understand the primary identification keys. Europe and other parts of the world also have saffron milky caps, and while they are very similar, they are not the same.

Milky cap mushrooms are an understudied species with a vast range, habitat preference, and edibility. It is one of the most prominent mushroom types worldwide, with at least 500 species. But, most certainly, there are more to be cataloged. There are at least 100 species just in North America. While many milky caps look similar or nondescript, these saffron milkies stand out due to their unique coloring, staining, and milky latex properties.

Want to learn about other edible milky cap species? Check out these guides for Indigo Milky Caps and Candy Caps.

No milky caps are deadly, so you don’t have to worry about getting horribly ill. A few species are mildly toxic to badly toxic, and there is the possibility of making yourself sick. However, it won’t be an issue if you follow this guide. If you’re ever in doubt, ask an expert – you are responsible for making a proper identification or having a mycologist assist you.

The biggest problem with milky caps is that some of them taste absolutely terrible. They’re horribly bitter or peppery, not an enjoyable experience, to say the least.

The best way to ensure you’re foraging tasty milkcaps is to learn the characteristics of the ones growing around you. All the saffron species listed here have tell-tale traits to make identifying easier.

All About Saffron Milky Caps

Milky caps are mycorrhizal, meaning they form relationships with tree roots. They only grow on the ground and never from logs or trees. Milky caps are distinguished from all other species of mushrooms by the thin milky substance they discharge when their gills are cut. In some species, the milky latex is difficult to see, but for most, it’s pronounced.

The latex is actually being exuded from their spores. However, to the forager’s eye, it comes from the gills, and this is where you should look.

Saffron milky caps aren’t super flavorful, but they are dense and cook up nicely. It’s an excellent mushroom to know because they often occur in large numbers. You might end up with a basketful! Some describe the flavor of North American saffrons as inferior to the European species – someday, someone has to do a side-by-side taste test!

How To Find Saffron Milky Caps

Saffron milky caps grow mycorrhizaly with trees, with a preference for conifers and cedars. These aren’t the only trees they grow around, but it is the best place to start looking. They also seem to prefer mossy areas. As saffron milky caps emerge from the ground, they can get lost in the forest duff – either covered by needles or moss. Their orange coloring, though, makes them stand out and pretty easy to spot.

These mushrooms usually grow in groupings or broad patches. They grow individually, but where there is one, there will usually be more. Mark a patch when you find it; they will be there again the following year as long as you pick sustainably.

When you’re in conifer or cedar predominant forests, look for small to medium orange capped mushrooms on the forest floor. They might be covered in moss or needles, but their orangeness breaks through. There are other orange-capped fungi in addition to saffron caps, so be sure to cut the gills to see if it emits a milky liquid.

The most well-known milky cap mushroom, the saffron milk cap (Lactarius deliciosus), is commonly found in North American mushroom foraging books. However, as it turns out, this is a species endemic to Europe. L. deliciosus has spread worldwide, but not to North America (that we know of).

It’s impossible to make sense of them all from a scientific perspective (for now), but it’s much easier from a forager’s point of view. The basic appearance, staining, and latex coloring properties clearly put these milky caps in their own category.

This is the most common deliciosus species in western North America. It grows with conifers, preferring lodgepole pines and Engelmann spruce. It occurs in the summer and fall from Alaska to California. All parts of this mushroom stain green, and it is often completely greenish at maturity.

When young, this milky cap is carrot orange, then matures to a dirty yellow or dull brownish orange. The cap coloring is zonal with concentric shades of orange. As the mushroom matures, the caps become indented or funnel-shaped.

The gills and stem are also orange, and the flesh is whitish to light orange. L. areolatus flesh stains purplish-red when cut. A key distinguishing factor of this milky cap is that it produces very little milk; the milk starts out orange, turns deep red, and then green.

A little side note – there is already a milky cap with the name Lactarius areolatus, so this var. species name will have to change at some point.

Most likely occurs throughout northeastern N. America, although exact distribution is still being studied. This milky cap slowly stains red when cut, then turns green. All parts of the mushroom bruise green when handled.

The cap is 3-5 inches wide, carrot orange, and often has concentric color zones across it. Deterrimus caps start out with rounded tops that slowly turn slightly indented. Orange gills are crowded and run down the stem a little ways. The stem is also orange, thick, 1-3 inches long. This milky cap seems to prefer conifers, especially northern white cedar and eastern white pine.

The bleeding milkcap grows with conifer trees (Douglas fir) in western North America. L. rubrilacteus caps and stems are orangy-brown to bluish-green. The blue-green occurs in older, mature specimens. Caps are rounded when young, but they become indented like a belly button in the center. They are 2-5 inches wide, have a folded margin, and noticeable concentric zonal coloring. The bleeding milkcap grows 2-6 inches tall and is quite brittle.

This milky cap bleeds red latex “milk” from the pores. The red doesn’t change color, though, like with other species. All parts of the mushroom stain green when handled, which is common with the saffron milkys. It also has a slight fragrance.

A common milk cap from the northeastern United States and Canada, L. thyinos grows in cedar bogs. It is the only species of Lactarius with orange milk and caps and stems that don’t bruise green. The orange milk doesn’t change color but slowly stains the flesh around it red.

This milkcap often grows with L.deliciosus var. deterrimus. They look incredibly similar, but L. deliciosus bruises green rapidly. The cap is 1-4 inches wide, flat when young, then becomes vase-shaped. On the cap are concentric zones of carrot orange, and pale orange.

Its gills and stems are orange and bruise brownish. The stem is also hollow.

Some may debate whether this species belongs with the saffron milky caps since it doesn’t stain green, but we put it here because it often grows with other saffron milkys and is very similar in appearance.

How To Forage Milky Caps

If you find a milky cap, follow these steps to identification. This isn’t just for saffron milky caps but will help you identify other species as well. Identifying milky caps is a little more complicated than others because there are so many species to differentiate between. It is important to be rigorous when you have 100 possible options, with many of them only having minor differences.

There are several key identification points that the four species of saffron caps have in common. If you find a mushroom that matches these characteristics, you’ve most likely found a good saffron milky cap. There are other orange-capped milkies in the forest, so it is essential you do not use cap color on its own for identification.

How To Harvest Saffron Milky Caps

Pick young specimens that are still firm and orange. They’re probably old and won’t taste good if they’re already looking green. Cut or gently pull the mushrooms out of the ground.

Watch out for prolific bugs, slugs, and other insects having a nice meal. Milky caps are beloved by many insects, mollusk, and wildlife species. The tell-tale bug tunnels are usually easy to see in the cap and stem before picking.

Clean the milky caps well. Don’t worry about the discoloring – it doesn’t affect the taste.

Because some specimens may be slightly bitter (that’s normal), slice them and let them sit in a bowl of water for ½ hour to lessen the acridness. Otherwise, you’d have to do a nibble taste of every mushroom before cooking. The soaking method just makes life easier.

Saffron milky caps cook up wonderfully, keeping a nice density without reducing down too much. They’re juicy and slightly meaty, much like a button mushroom with a milder flavor. Some say they’re grainy, but after cooking, it’s usually not so disconcerting. Graininess might also occur because mushrooms are past-prime.

Within 24 hours of consuming saffron milky caps, you may notice your urine is orange-red or brown. Don’t freak out! This is normal.

This species has an orangy or all-white cap and bright orange gills. The stem is white, like the cap, or light orange. The big difference is that the milky latex is white and doesn’t change color. Also, the cap and stem don’t bruise. Edibility is unknown.

This species is often confused with Lactarius salmonicolor, a saffron milky cap from Europe with gills that bruise red. It is edible, but it is not the same as this North American species.

This light orange or white-capped milky is listed as growing in the southeastern United States around pine trees, especially where there has been recent flooding. However, it probably has a much broader range based on local reports and findings.

Can I grow Saffron Milky Caps?

Maybe. Milky caps are mycorrhizal, forming relationships with tree roots. This is a difficult thing to copy in cultivation. It may be possible to encourage the growth of milky caps on your land by breaking up old specimens and spreading them around conifer or cedar-heavy areas. No guarantees it will work, but it might.

There are no grow kits for saffron milky caps.