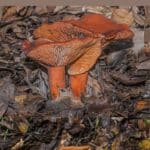 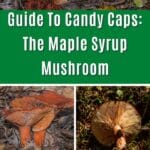 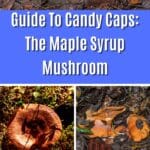 Candy cap mushrooms (Lactarius sp) are rather plain-looking from above, but they have a few revealing features that make them pretty easy to identify. The main feature, which gives them their fun name, is that they smell like candy, literally. Candy caps have a sweet aromatic maple sugar scent that is really quite remarkable!

There are three main species of candy cap mushrooms. All of them are edible, delicious, and a lot of fun to cook with. Ever thought of making ice cream with mushrooms?

All About Candy Cap Mushrooms

Due to their sweet scent, candy caps aren’t cooked like most edible mushrooms. They are predominantly used as a flavoring. Their flavor and scent intensify with drying, so the majority of users dry out the mushrooms, powder them, and use the powder to flavor the dish.

Dried candy caps are known to keep their scent for a VERY long time, like decades. Dried specimens in herbariums still hold their scent many years later, so hopefully, you like how this one smells.

If you want to get ahold of these sweet mushrooms without going out in the forest, they are sold online. They tend to be quite expensive due to their small size and the labor needed to get any quantity at all. However, thankfully, a little does go a long way.

Most people consider candy caps a California or West Coast mushroom because that’s where they are most popular and populous. But candy cap species do grow on the east coast, too, so don’t despair; just keep investigating all the little brown mushrooms and send up some prayers to the mushroom gods.

Reports of the scent liken it to maple syrup or curry, which are related scents (as odd as that sounds). Others call it a burnt sugar smell. The maple syrup scent is strong in some species, but in others, it’s just faint when the specimen is fresh. The smell becomes more potent when the cap is dried.

It was just in 2012 that the chemical that causes this unique scent was isolated. William Wood, a chemist at Humboldt State University, successfully determined the natural chemical to be quabalactone III.

Candy caps, in general, are small brownish mushrooms. They aren’t eye-catching, so you have to pay attention and seek them out. Or, check all the mushrooms you see (which we recommend doing anyways…).

All parts of the candy cap mushrooms are brittle – this is actually a key distinguishing feature. The cap and stem break easily, usually with a clear snap.

Candy cap mushroom cap coloring varies from orange-brown to burnt orange to more orange-red. The caps start out with a bell-like shape, with edges rolled inwards. As it matures, the cap flattens out and eventually turns upwards and looks like a funnel with a depressed center. Caps range from .75-5 inches wide, depending on the species.

The stems of candy cap mushrooms are the same color as the cap or a little bit paler. They are even in length, without any bulging or bulbous base. They don’t have any decorations, but they are often very slightly velvety to the touch. This is more common in young specimens. Stems snap in two easily and crisply.

Gills of candy cap mushrooms are light-colored, usually whitish but with quite a bit of variation between species. They are almost always lighter than the caps and stems. When the gills are cut or bruised, they bleed a milky white latex. The milk does not change color, and it does not stain the gills; it remains white.

The milky latex may taste sweet, but more often it is flavorless or only very slightly sweet. It will never be super bitter or acrid (maybe just slightly so); other milky cap species have bitter or spicy-tasting latex, so this is another good way to tell them apart.

The flesh of candy cap mushrooms is whitish, pale orange, or light cinnamon. It is brittle and hard, not squishy. The flesh does not change color or stain when it is sliced.

Candy caps grow from the ground, never from trees. However, one species sometimes is found growing from decaying wood. In general, look for candy caps on the ground, growing around trees.

These mushrooms grow singularly but often occur in large scattered groupings. There is rarely just one in an area. They particularly like mossy, rich soil areas.

This is a very small, dark brown mushroom with a reddish tinge. The cap is around the size of a quarter or a half dollar, and the stem is long and slender.

There’s a bit of confusion and much need for clarification with the North American “L. helvus” species. The European species smells more like licorice or fenugreek than maple syrup, and its common name in Europe is the Fenugreek milkcap. There is a rather disturbing story about this mushroom poisoning a group of 419 people in Leipzig, Germany, in 1949.

The specifics of the poisoning aren’t certain, but it is sure that no one died. The symptoms included vomiting, diarrhea, and sweating, and it seems this is something that can happen if the mushroom is eaten raw. So, don’t eat this one raw! But also, we’re not sure this European mushroom is really the same as the North American, so it’s a little confusing.

This species may be spreading, or it may just be becoming better documented. That is to be determined, maybe.

This candy cap mushroom is bigger than the others but still small overall. The cap and stem are usually of equal length. The cap is deeply red or orange-brown. This species of candy cap is the primary one growing on the west coast and the most well-known and used of all the species.

Very similar to Lactarius rubidus (above) but with a larger cap that is more brick red than reddish-orange. This species has a stout stem and tends to grow in clumps, unlike the other species, which grow singularly and scattered. It grows with live oaks and is less fragrant. It is also an excellent edible.

Do not confuse this milk cap with Lactarius rufus, known as the red hot milk cap. You’ll know if you taste it! It is similar in color to L. rufulus but grows with pine or birch, not oaks.

There are hundreds of Lactarius mushroom species that need to be weeded through a bit when identifying the candy cap. Thankfully, a few telltale signs set the candy cap apart from other milky cap mushrooms.

This little brown mushroom is one you must know if you want to forage any small brown mushrooms for eating. Galerina marginata is known as the deadly skullcap, funeral bell, and deadly galerina. Yeah, it’s not one to be messed with! Deadly galerina visually looks similar to a candy cap, but on closer inspection, it’s easy to tell it is not a candy cap. The key is to inspect closely.

Galerina marginata does not bleed any substance when cut or bruised. It also does not smell sweet. They usually have a ring around the upper portion of the stem; candy caps never have this ring. Deadly skullcaps have brown gills and a rusty brown spore print. If you have any questions on identification, do a spore print. Candy cap spore prints are whitish or yellowish.

These mushrooms are collected for their use as a flavoring. They’re rather unsubstantial mushrooms on their own. But, when dried and powdered, they are a powerful aromatic. Candy cap powder is used in many desserts, including cookies, ice cream, pancakes, breads, custards, puddings, and cakes. They can also be a sweet offset for a savory dish, like an accompaniment for a smoked or barbeque dish.

Candy caps aren’t well known in the culinary world, but chefs that know them adore their uniqueness. Quite a few high-end restaurants seek out candy caps or candy cap powder for their fancy creations. The mushrooms and powder tend to be quite expensive. Thankfully, a little bit goes a long way.

The best way to get the most out of the whole dried or powdered caps is to steep them in a warm liquid, like almond milk. This is the same method bakers use to infuse vanilla bean pods into a dessert.

If you want to learn about other milky cap species, check out these guides for Indigo Milky Caps and Saffron Milky Caps.

And, if you want to get more into the fascinating and super complex world of milk caps and have some spare money, check out Milk Mushrooms of North America: A Field Guide to the Genus Lactarius by Alan Bessette, David Harris, and Arleen Bessette.

Can I grow candy cap mushrooms?

There isn’t a lot of information available about growing candy caps. It seems some people have tried and have had some successes, but nothing yet that makes really investing in their growth worthwhile.