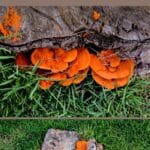 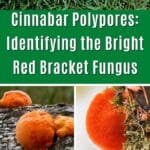 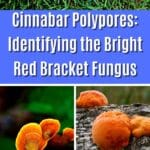 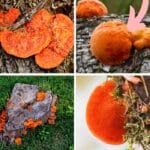 The cinnabar polypore is a fun fungus to find, especially in the winter when it might be the only pop of color you see against the gray or white background. Cinnabar polypores (Pycnoporus sp.) aren’t edible species; they are decomposers with a preference for hardwoods. In North America, two cinnabar species occur, one more northern and one more southern.

All About Cinnabar Polypores

The Pycnoporus genus contains five species, two of which occur in North America. These two species, Pycnoporus cinnabarinus and Pycnoporus sanguineus, are separated mainly by geography. P. cinnabarinus fruits primarily in northern regions, and P. sanguineus is in the south. There is some significant overlap, especially in the southeast, so you still should double-check the identification keys to determine which one you have.

These are not edible mushrooms; their bodies are dense, corky, and tough. Cinnabar polypores stand out from other polypores in their coloring – the bright orange-red is exceptional. One astonishing characteristic about these fungi is that they keep their coloring even after they’ve been picked. This forager has several specimens from 6 years ago that are still as bright orangy as they were when they were found.

Cinnabar polypores cause a white rot and then feed off the decaying wood nutrients. This small genus is a primary wood-decaying species, which plays a significant role in global carbon cycling by breaking down dead wood. They are widespread worldwide and usually common in the areas where they grow.

Starting in the 1990s, Pycnoporus species began being investigated to determine their potential in breaking down industrial biomass, specifically chemical waste. Studies are still ongoing.

In addition, cinnabar polypores produce a natural pigment that is biodegradable, with antibacterial and antiviral. It may be a better pigment source for food, textile, and nutraceutical companies that need coloring agents.

The cinnabar polypore produces cinnabarinic acid, a compound that protects the fungus from bacteria. There is a lot of scientific interest in cinnabarinic acid and its potential in treating disorders linked to the central nervous and immune systems.

Cinnabarinic acid occurs in trace amounts naturally in the human brain. Research shows that patients affected with schizophrenia have reduced amounts of the compound. A study in 2020 researched the link between cinnabarinic acid levels and psychotic behaviors, discovering that low doses of cinnabarinic acid reduced psycothic-like action in rodents. More research needs to be done, but this flashy little polypore may hold hope in treating Tourette’s, schizophrenia, OCD, and PTSD.

Spring through fall, potentially into winter in warmer climates. In cooler northern locations, it won’t grow new in winter, but you can find mature caps still firmly attached to the dead wood.

Cinnabar polypores grow on dead wood, like stumps, branches, and twigs. Usually, the wood still has bark attached, and the fungus is growing from the bark. They never grow from the ground. It is rare to find just one growing; usually, they appear in dense groupings.

The cap is semi-circular, often described as kidney-shaped. It is primarily flat and very brightly colored, reddish-orange to rusty orange-brown. In youth, the cap is finely hairy, but it turns smooth and rough with age. It may be heavily pock-marked.

Caps often feature zoned coloration, with the edges somewhat lighter in color and apparent distinctions between the sections. This varies widely among specimens.

When there are dense growths, the caps may fuse together. It is still apparent they are separate caps, though. The flesh of this polypore is dense, leathery, or corky,

The underside of the cinnabar polypore is the same bright reddish-orange, often even brighter than the top. Polypores have pores, not gills, so the underside is flat and often relatively smooth.

The cinnabar polypore doesn’t have a stem, but it may look like there is an extremely short, stubby one where it attaches to the wood.

The differences between the two species are minor and not always easy to determine. P. sanguineus caps are thicker around the edges and more rigid, and their color doesn’t fade as much over time. P. sanguineus is primarily a tropical species, but it does occur in the southern United States. The primary difference is location. However, in the southeast, both species occur and overlap, so there it is much more complicated to determine which one you have.

The caps can be cut or gently pulled off the bark. There isn’t much reason to forage this species, except for one as a novelty to admire the coloring. Or if you are interested in natural dying potentials. The medicinal uses are still being explored.

The vibrant coloring makes it almost impossible to mistake the cinnabar polypore for anything else.

At first glance, this looks a bit like a cinnabar only because it is also a polypore, orangish, and appears on hardwoods. However, it is easy to differentiate. H. nidulans is a dull orange or orangish-brown color that blends into its environment very well; it doesn’t stand out at all. It is also more flesh than the corky, leathery cinnabar.

Can I grow cinnabar polypores?

Yes, they are capable of being cultivated, but the techniques aren’t well described for the home grower. If you know more about this, please share with us!