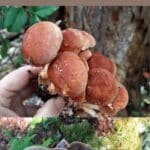 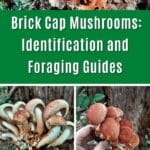 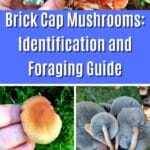 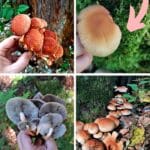 The brick cap mushroom (Hypholoma lateritium) is an often overlooked edible fungus due to its rather unremarkable looks and slight flavor. It’s not a prime edible species that’ll knock your socks off with its flavor, but it’s still quite good. Brick caps are an excellent “bulk” mushroom – they grow in large groupings and add nice volume, texture, and substantiation to a stew or soup.

While this may not be the mushroom you forage when there are many other options, it’s an excellent mushroom for lean years. For anyone wanting to improve their self-sufficiency, and survivalist skills, the brick top is one of the best fall mushrooms to know.

All About Brick Cap Mushrooms

Brick caps earned their common name due to the simple fact their caps are brick-reddish brown. They are also known as Cinnamon Caps, Chestnuts (confusing because other fungi share that common name), Brick Tufts, Brick Tops, and Kuritake (Japanese). They are an autumn mushroom that grows in dense, tight clusters around hardwood stumps and dead trees.

While brick caps grow in many places across the world, they are only considered a real edible mushroom in the US and Japan. There is no real explanation for this, except for them not being as good an edible as other forest possibilities. However, it could be because it is related to a poisonous species and looks slightly like another. But, its lookalike-ness and cousin species shouldn’t be why it is listed as inedible. That’s really not fair to the brick cap.

The species name “laterit(ium)” means “somewhat brick-colored” – very on point! “Hypholoma,” the genus name, means “mushroom with threads.” This most likely refers to the partial veil on young species that looks like spun cotton.

Brick cap mushrooms appear in fall and fruit all season until the first frosts or snow appears.

The saprobic brick cap feeds on dead and decaying hardwood. They are most commonly found growing out of old stumps and fallen logs.

While the brick cap grows across the US, it is most common east of the Rocky Mountains and, more specifically, in the northeast/New England.

The cap of the brick top mushroom is wide, convex (curved inwards, with a lip), or mostly flat. It averages 1-4 inches across, is brick-reddish colored, and has no markings or decorations.

Often, the caps are lighter in color around the edges, either pinkish or tan to yellowish. This is most common when the mushrooms are young. As they mature, they take on a deeper reddish coloring. The center of the cap is always the definitive reddish-brown but may look more like a splotch in the middle on the younger caps.

While brick top caps are usually flat, they may also have a raised bump in the center or be slightly irregularly shaped. They can appear quite cone-shaped. Around the cap’s edges, there may be tiny white veil remnants like dots, but they usually disappear quickly with growth.

Underneath the caps, this mushroom has crowded gray gills. The gills are a key identifying feature as they are very distinctive. They are either light or dark gray and as they age, they get darker and turn to purple-gray or brownish-gray. When the brick cap is very young, the gills are covered by a white partial veil.

The stem of the brick cap mushroom is fibrous, 1.5-5 inches long, and usually has a ring around it where the partial veil was attached. However, the ring isn’t always noticeable. Above the ring, the stem is off-white or yellowish-colored. Below the ring, the stem is darker and brick red to medium brown. Brick cap stems commonly bruise yellow, but not always.

The flesh of this mushroom is white, firm like a common button mushroom, and doesn’t change color when cut or bruised. It may smell slightly nutty or mushroomy, but overall the odor isn’t distinctive.

The spore print is purple-brown.

It’s not hard to spot these mushrooms. They grow in such dense clusters and groupings that they stand out in the forest. Also, since they appear so late in the season, there’s usually not much else happening mushroom-wise.

This species looks similar to the brick cap only in form and habitat, unsurprising since it is in the same family. However, the coloring is completely different. The caps of H.capnoides are yellowish-brown or light brown; there is no red at all. Also, they grow on dead conifer trees. It is an edible species but looks even more similar to the sulfur tuft (listed below), which is poisonous, so use caution if you forage it.

This mushroom is in the same family as the brick cap and has similar growth patterns, but it has no red in the cap. Instead, the cap is sulfur yellow to orange-brown. The gills are grayish-green. Be very careful about this species; it contains a toxin that causes severe gastrointestinal distress and possibly convulsions.

As you can tell by the name of this mushroom, it isn’t one to play around with at all. The deadly galerina is extremely poisonous, and ingestion is often fatal. It grows primarily on dead or dying conifer wood and slightly resembles the brick cap mushroom.

Redlead Roundhead (Leratiomyces ceres) (aka Stropharia aurantiaca, which is incorrect)

This lookalike to the brick cap has a bright red or orange-red cap and pale gray to purple gray gills. It looks very much like the brick cap in its coloring. The differences between the species are in growth habits and habitat. The redlead roundhead usually grows in woodchips, not on logs or stumps. It is a “landscaping” mushroom, imported with woodchips and sawdust and found growing in human-disturbed habitats like lawns, gardens, and yards.

Only harvest clean specimens with no or very minimal bug damage. Many folks report the mushrooms have a bitter flavor, but it is thought this comes from the bugs. Young, bug-free specimens rarely are bitter.

Brick caps have a slightly nutty flavor that stays with them through cooking. Older specimens may be bitter, so many chefs recommend cooking the mushrooms separately to ensure you don’t ruin a dish by mistake with one or two bitter specimens in a batch.

The stems of brick tops are usually pretty tough and not worth messing with – remove them and just cook the caps.

There aren’t any recipes online specifically for brick cap mushrooms, but you can substitute them in any recipe that calls for button mushrooms or a mushroom mix. Due to their light, nutty flavor, they are highly versatile.

Can I grow brick cap mushrooms?

Is the brick cap mushroom medicinal?