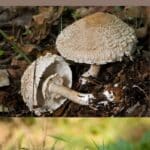 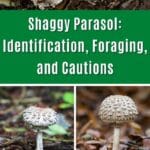 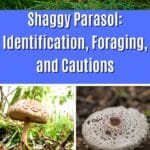 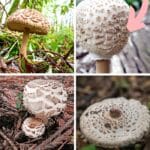 Shaggy Parasols are an edible mushroom with a flavor similar to button mushrooms but much, much better. They also have an excellent, dense texture. However, this edible mushroom comes with one very troublesome lookalike, along with a lookalike that is even more valued than it. This makes foraging the shaggy parasol slightly tricky; imagine having two lookalikes, one fantastic, one gut-destroying. This is not a mushroom for the beginner forager, sadly.

Don’t get the wrong idea – Shaggy parasol identification isn’t difficult. But, you do have to be paying very close attention to details, understand the different parts of mushroom identification, and be more cautious than impulsive. For mushrooms like these, I always recommend passing them up the first few (or 50) times you find them and just focus on identifying, not eating.

Shaggy Mushrooms and Parasols, What Is The Difference?

There are several edible mushrooms with very similar common names: Shaggy Parasols (discussed here), Parasols, False Parasols (the vomiter), and Shaggy Manes. They are not the same mushroom! Shaggy parasols and parasol mushrooms are very similar in appearance. In fact, not that long ago, they were thought to be in the same genus. It’s pretty easy to get these two confused.

On the other hand, Shaggy Manes are only superficially similar to parasols and shaggy parasols. They’re easy to differentiate once you know what to look for. However, due to their common names, shaggy manes and shaggy parasols often get confused or mixed up as to which is which.

False parasols, unfortunately, also look incredibly similar to shaggy parasols. This is the problematic species, as it will make you quite ill. It’s not deadly, but you might wish you were dead after eating it — severe gastric upset is just one of the joyous side effects of eating this mushroom.

All About Shaggy Parasols

All three of these species occur in North America, as well as Europe and southern Africa. These species used to all be under the same name, Macrolepiota rhacodes. Then, in 2002, DNA analysis done by mycologist Elsa Vellinga separated the species and determined that they were closer in relation to Chlorophyllum than Macrolepiota. Yeah, fungi taxonomy gets really crazy sometimes.

In guidebooks, you still may find this species listed under Macrolepiota or just Lepiota.

Spring through fall, but more common in fall.

These mushrooms are most common in open fields and meadows, lawns, and pastures. They’re also found in greenhouses, wastelands, and gardens. They grow singularly but are often found in large numbers growing near each other. Shaggy parasols are known to grow in fairy rings or dense troops. They tend to be more common in areas with conifers, spruces in particular.

Chlorophyllum rhachodes is widespread across North America, but more common east of the Rocky Mountains. Chlorophyllum brunneum is found on the west coast of North America. It may occur on the east coast, but it is scarce there. And lastly, Chlorophyllum olivieri is only in the Pacific Northwest.

This is a large-capped mushroom that truly stands out wherever it grows. Caps average 2.5-8 inches across and are covered in shaggy tattered white fibers with thick brown scales on top of them. The white hairy fibers cover the entire cap, like animal fur – it’s fluffy! Then, brown scales are scattered on top of the furriness, often in concentric zones but unevenly and sporadically.

In youth, the cap is ball-shaped, like someone plopped a golf ball on top of a tall stem. Or, like a large light brown lollipop. At this stage, the cap is covered by a thin brown skin (veil), which breaks apart as the mushroom grows to create thick scales. The cap’s edges are pretty tight around the stem at this point, and the gills are covered by brownish skin, a universal veil.

As the shaggy parasol matures, the cap opens up and spreads out like a flattish disk or open umbrella. At the very center of the cap, there is an upraised brown bump – this is the remnant of the brown skin that previously covered it.

The scales are also remnants of that skin, but they are broken up and scattered around – they are not uniform in size or thickness. The scales often look patterned, rippling out from the brown center like waves to create a rather decorative aspect. With age, the scales can fall off from heavy rains, but they rarely fall off entirely.

Shaggy parasol gills are white and close together. You can’t see the gills in the button stage because they are covered by a thin membrane called the universal veil. The gills tend to turn light brown when the mushroom is fully mature.

The stem is evenly formed with a bulbous base. It is a significant size, averaging 2-8 inches tall. Stems are white without patterning or decoration but may be brownish on the lower half. The stem will bruise brownish with handling, too.

On the upper part of the stem is a white skirt encircling it. This is a remnant of the brown skin (universal veil) that previously covered the mushroom. The top of this skirt is white, but the underside will have brown bits.

When a shaggy parasol is cut, the white flesh turns pinky-orange or a saffron color, then turns rusty-red or maroon. This is especially apparent at the top of the stem.

Keep an eye out in fields, meadows, and open green areas for a tall white and tan mushroom. If it’s there, it’s unlikely you’ll miss it!

Differentiating Between The Three Shaggy Parasols

Determining which shaggy parasol species you’ve found can be a little tricky. The principal determiner is location, but there are a few other telltale signs to figure out which one you’ve found.

The parasol is a highly valued edible mushroom, so if you do find this one, celebrate! However, make sure you identify it correctly, as well, since the false parasol is also similar and will make you quite ill.

This is the most challenging lookalike for the shaggy parasol. When young, they look incredibly similar. They both have shaggy caps, bare white stems, golf-ball-like caps, and a similar size. The only way to be absolutely certain you don’t have a false parasol is to do a spore print. False parasols have a greenish spore sprint, while shaggy parasol’s spore print is white.

When young, shaggy manes look slightly like shaggy parasols, but they’re not complicated lookalikes. Shaggy mane caps are elongated, not rounded. Sometimes when they’re very young, they’ll be a little round, but they quickly morph into their lanky appearance.

Shaggy manes usually grow in large groups, and they’ll be at different stages of maturity. A clear sign you’ve found shaggy manes is seeing some inky black rotted messes nearby – that’s what they turn into once past maturity. Shaggy manes are also an excellent edible if you find them in good condition, so harvest these if you see them. Just be sure to cook them up the same day so you don’t end up with a gross, melted, inky mess in your fridge!

Learn more with this in-depth identification and foraging guide for Shaggy Manes.

Shaggy parasols contain a number of toxins that cause a severe gastric upset when eaten raw. These toxins are neutralized upon cooking, but some individuals report that cooking isn’t enough and still experience issues. How widespread this problem isn’t known – this is hearsay from mushroom groups and forums, so it’s hard to know precisely the extent of the sensitivity with people. Or whether it’s a rumor based on one person’s reaction that has now taken on a life of its own.

On the other hand, folks have been eating shaggy parasols for centuries, at least. And there’s a reason for that – they’re delicious! Their flesh is dense and thick and holds up to cooking and frying.

Shaggy parasol mushrooms taste best when they’re younger. They have a mild, pleasant flavor, like a button mushroom but with more depth. The cap tastes better than the stem. In fact, many people toss out the stems because they’re tougher and less palatable. The stems are perfectly edible, though; just know they need a bit longer cooking than the cap.

Due to their considerable size, the caps are perfect for stuffing, frying, and grilling. Use them in any recipe with button or portobello mushrooms for an upgraded result.

Is the Shaggy Parasol Mushroom Poisonous?

There is a lot of conflicting information online about whether this mushroom is safe to eat. The short answer is, no it is not poisonous at all — meaning, it will not kill you if you eat it.

So, it is up to you to decide whether to eat it or not. Many, many people eat and have been eating it for centuries, and it is unknown if any had issues with it. It didn’t stop anyone from consuming it previously.

Best practice is to eat a little bit, see how your body reacts, and go from there. It could be the next best mushroom in your foraging portfolio. You could regret ever hearing the mushroom even exists. Be smart, be mindful, be cautious.

What is the primary difference between parasol and shaggy parasol mushrooms?