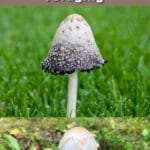 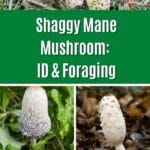 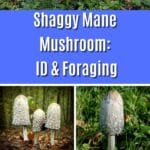 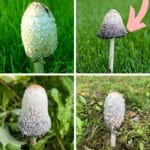 Coprinus comatus, also known as the shaggy mane, holds a special place in the hearts of wild mushroom lovers. This species is edible, beautiful, and has a method of spore dispersal that seems like it’s right out of a science fiction movie.

Like a frightened squid or exploding pen, this mushroom releases a black liquid that is laden with spores. As it matures it will deliquesce, meaning it will appear to melt away until only the stem is left.

Why does it do this? Due to the tall, dome-like shape of the cap and the fact that the gills are so crowded together, the shaggy mane can’t easily just release its spores into the wind like so many other mushrooms. Deliquescence is nature’s way of making sure the mushroom reproduces.

This interesting feature also occurs shortly after the mushroom is picked. Giving a new meaning to the phrase “use it or lose it”.

Yes, Coprinus comatus is edible, and a tasty one at that. With a little finesse, they’re a delicious addition to soups, eggs, or stews.

Let’s learn more about the aptly named inky cap. First, we’ll learn how to identify Coprinus comatus, and move on to how to prepare and cook. I’ve included a simple recipe to get you started. We’ll end with some more fun shaggy facts.

How to Identify Coprinus comatus

Fortunately, the shaggy mane mushroom is fairly easy to identify. Its long, cylindrical cap is very unique, and its ability to disintegrate into an inky black mess is unmistakable!

That said, identification mistakes do happen. Please don’t eat any mushrooms solely based on what you’ve read online. Make sure you’ve identified any edible species at least 3 times before, and nothing replaces hands-on instruction from an expert.

Coprinus comatus is considered one of the safest mushrooms to identify, but people do still make mistakes. Below are some of the most common mushroom mix-ups that could theoretically happen. Again, if you’re new to mushroom hunting please get some hands-on experience before you eat anything!

Coprinopsis atramentaria – Formerly known as Coprinus atramentarius, also known as the inky cap or tippler’s bane. This mushroom is edible, but contains a chemical known as coprine, which causes severe reactions when mixed with alcohol. So it’s edible and poisonous! These dissolve into the ink as well, but the biggest visible difference is that they’re more grey than white without the scales.

Coprinopsis picacea – Also known as the Magpie Inkcap. This is a poisonous mushroom found in Europe and North America, although finding them is not very common. When they mature the cap is an obvious brown underneath the scales, but sometimes they can be confused with a shaggy mane when the caps are young.

Chlorophyllum molybdites – Also known as the green-spored parasol. This is a very poisonous mushroom that is commonly mistaken for something edible. They’re also white with a brown top, but the scales look slightly different and the cap is not as long and oval. Please learn to identify this mushroom on its own as it’s responsible for many beginner poisonings. If you are ever in doubt, walk away — it is not worth taking chances with this one. The Key Differences Are:

How to Cook Coprinus comatus

So you found or grew some delightful shaggy mane mushrooms and now you want to cook them? You’re in for a treat! Coprinus comatus has a yummy mushroom flavor that’s not overpowering.

Eat them when they’re young before they start to turn black. Or, let them decompose to create an edible inky sauce, following this recipe from the Forager Chef.

Time crunch – Coprinus comatus will start to disintegrate fast. Real fast. If you can’t prepare them within a few hours of picking, then you’re probably going to lose them. They don’t keep all that long in the fridge, and drying doesn’t really work either. So have a plan for them when you pick!

Water content – Shaggy manes are very watery, something to keep in mind when cooking and cleaning. This can make for a disappointing sauté, so make sure all the moisture is cooked off before eating or including other ingredients. For this reason, many people prefer them in a soup or sauce.

Storage – If you don’t have an immediate plan for a big batch o’ shaggy manes, the best thing to do is sauté and freeze them. Make sure you cook them first! Otherwise, you may have quite a mess on your hands when you thaw them out. Learn how to cook and freeze mushrooms here.

Flavor – These mushrooms have a light, mild flavor that’s tasty, but easily overwhelmed in a dish. If you add too many strong ingredients or other mushrooms, you won’t be able to taste them. They’re best in a simple recipe where their flavor can shine.

Flesh – This is a delicate species, so don’t sear the heck out of them on high right out of the gate. They’re best when cooked gently over medium-low heat. It may take a little longer but it will be worth it.

Alcohol – Another species of the inky cap, Coprinopsis atramentaria, can cause serious negative reactions when consumed with alcohol due to the presence of the chemical coprine. While the shaggy mane itself does not contain coprine, I have heard of people claiming to get sick when combining them with alcohol. Whether a case of a misidentified mushroom or not I can’t say, but for safety’s sake I’d be cautious when consuming them with booze.

These mushrooms work best in simple recipes and are great as the star of a soup. I for one prefer them with eggs!

Clean mushrooms by gently wiping them with a damp cloth. Slice lengthwise.

I hope you’ve enjoyed learning about the lawyer’s wig. And don’t worry, if you want to pick one just for fun to watch it disintegrate, I won’t tell anyone. 😉