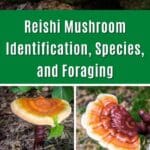 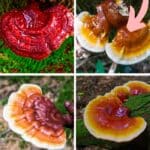 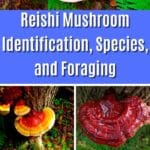 Different types of reishi grow all over the world, with several particular to North America. Below I’ll go over some information on the identification of the North American species of this medicinal mushroom.

There are a few different species of Ganoderma that are referred to as “reishi”. The most common by far is Ganoderma lucidum, the species known in Chinese medicine as the lingzhi, or the mushroom of immortality. This is usually what people think of when talking about reishi mushrooms.

In the North America, there are 16 (sixteen!) species of reishi, though. They all look very similar, so much so that many people have trouble telling them apart (including this writer!). Usually, the only way to be sure what you have is based on location and possibly DNA analysis.

Some insist that all of the mushrooms above are the same species. But, studies done in 2017 and 2018 make clear that there are many separate species. This guide is covering the 4 most common, of which there is clear differentiation.

And, to be clear, Gandoderma lucidum, the species type from Asia is not in this guide. It does occur in North America, but it is almost certainly not native. To learn more about the Asian reishi, consult this guide on Ganoderma lucidum.

These are the basic characteristics for identifying any type of reishi. Further down, the species is broken up so showcase the differences in types.

All reishi fungi are saprotrophic, meaning they feed on dead organic matter. Look for them on dead or dying trees and old stumps or logs.

The different species are particular about their host tree. Species that prefer hardwoods rarely cross the line to conifers and vice versa. Some types even limit themselves to just one or two tree types within the hardwood or conifer families.

Reishi only grows on wood, stumps, and logs. The tsugae species seems to prefer conifers, mainly hemlocks (tsuga means hemlock). Other species are found on hardwoods.

You won’t find this polypore growing on the ground or in fields. It is always attached to some type of wood, most often a dead stump or fallen log.

The caps of reishi mushrooms are kidney or fan-shaped. Their coloring is reddish with a wet, lacquered appearance when young. The shiny, red-brown cap is one of the main identifying features of this mushroom.

When young, the growths are soft and oddly shaped — they aren’t at full fan-shape until they are at least a few weeks old. Young reishi look like knobs or ladles with long handles.

Much of their growth shape is determined by where they are growing. Reishi growing on the side of a tree grow outwards, horizontally. Specimens fruiting on logs often develop stems that arch to allow them to then grow horizontally.

Reishi caps rarely get larger than a foot across and an inch or two thick. They may or may not be attached to a stem. They may also start out with what looks like a stem, but as they spread out, the cap encompasses the entire specimen eliminating any supposed stem.

Many guides indicate the stem or lack of stem is a great identification feature. However, this isn’t always reliable. Stem growth, more often than not, varies based on where on the tree or log the specimen is growing. Even species that “don’t have stems” may develop them to increase the fungus’s access to sunlight and water. Or they may not grow one because they have full access to sunlight in the form it first appears.

As they age, their flesh becomes tough and the spores drop. Air currents often blow these spores to the top of the mushroom, dulling its shiny cap.

A key difference between species that can help with their identification is the color of their flesh when dried. The color ranges from white to tan to dark brown. The flesh may also have concentric textural zoning that is apparent when it is sliced.

Spores come out of tiny pores on the underside of the mushroom rather than gills. This is why they’re known as polypores (poly means “many”).

Spring to fall for all species.

Reishi season doesn’t work the same as with gilled or bolete mushrooms. They appear at a particular time of year but will remain there all year long unless harvested, eaten by slugs, or seriously decayed. The most common scenario is that they remain on the wood surface until they deteriorate so completely they fall off the tree.

It’s normal to find them dead on the ground around a stump or log or just about to fall off. This process usually takes a year but may be shorter or longer depending on the region, season, and amount of bug/slug damage.

This guide describes the one common species in the western US and three common ones in the eastern US.

As the common name suggests, this species is found in Oregon. It’s also common all over the Pacific Northwest and in California. It grows with conifer trees and is the only known species in this region with a lacquered red cap surface growing from conifers. This reishi grows quite large and is hard to miss.

This eastern species is stunning in youth – highly varnished to the point it looks like someone went out in the woods and gave it a thorough polish.

Previously, this was thought to be a southeastern species, but now it is known to be more widespread across the eastern United States. This species looks much like G. tsugae, except it grows on hardwoods. It is also easy to confuse with G. sessile.

Same as G. curtisii above, except it grows on pine trees and only appears in the southeast. It was previously thought to be a separate species, but DNA analysis put it in the same family as G. curtisii. It is the same size as its cousin, with the same coloring and growth habits.

This species is very similar to G. curtisii – it grows from the same type of trees, generally looks the same, and can be virtually indistinguishable except with DNA analysis. The main supposed difference is G. curtisii usually has a long stem, and G. sessile is stem-less (sessile actually means “without a stem”). However, as previously discussed, this mushroom doesn’t always follow patterns with stem growth.

Instead, the slightly more reliable way to tell them apart is through the flesh appearance. G. sessile flesh features concentric zonal coloring, while G. curtisii does not.

If you want to harvest reishi, it’s best to catch them when they’re younger and fresher. You don’t want them when they’re little nubby babies; wait until the cap develops to its distinctive semi-circular, kidney-shaped mature form. It’s also best to wait for the caps to harden a bit before harvesting.

This usually means harvesting happens 1-3 months after they first appear.

Slugs and bugs love feasting on the polypore caps, so don’t wait too long, or there will be nothing left. The good thing is that a fruiting usually includes 5-20 caps on one tree or log, so you can just take the best-looking specimens.

To harvest the caps, make sure you have a strong, sharp knife. Cut the polypore off the wood – depending on the size, you might need to use a sawing motion.

To learn more about how to prepare this polypore, check out our comprehensive guide.

If you find reishi, you’ll have to make a tea to reap the reported health benefits. They’re simply too woody to eat like other mushrooms.

This tree fungus also has a reddish-brown lacquered cap and grows on conifer trees, which means it is commonly mistaken for a reishi species. The primary difference is in the name — this mushroom cap has bands or belts of color.

The cap is smooth with orange-yellow coloring and a white margin in youth, then turns dark reddish to brown with an orange margin. The belts are sometimes the same color but they form distinct bands on the cap. Underneath the cap, the pore surface is yellowish or brown, another difference from reishi. This polypore also never has a stem.

The red-belted polypore is also very large, dense, and woody. When you cut it open (if you can!), the flesh does not have concentric coloring and it not pliable. It is often completely dried out. The flesh of this fungus makes an excellent fire-starter!

In 2019, the Fomitopsis pinicola species was split into 3 distinct species. Previously it was thought all occurrences of the red-belted polypore were the same. DNA analysis made clear that F. pinicola is a European and Asian species and does not occur in North America. And, North America actually has two distinct species, divided by the Rocky Mountains.

Fomitopsis mounceae occurs in the northern United States and Canada. It grows primarily with aspens and conifers. Fomitopsis schrenkii is a southwestern species that grows on conifers.

Do keep in mind that you should always consult with someone experienced when hunting for a new medicinal mushroom. Throw out anything you’re not sure of, and only try a little bit your first time.

Good luck hunting for reishi, one of the most beautiful of all mushrooms!

Do all reishi species have the same medicinal value?

This is a great question that there is not a clear answer to — the North American species have not been studied fully to determine their medicinal properties completely.

Many people assume or surmise that they do and use the N. American species in the same manner as the Asian types. There is still much to be done to determine the effectiveness of reishi as a medicinal mushroom.

When is the best time to harvest Reishi?

It depends on the growth rate of the specimens, and possibly your cultural or mythical beliefs. Some foragers will tell you only to harvest during a full-moon or at sunrise the second day of the second month (I just made that up, but you get the idea) for spiritual or folklore-medicinal properties reasons. You can follow this or not, that’s up to you.

From a practical standpoint, harvest them when the caps are fully formed, dark red, and starting to harden or almost completely hardened. This is usually 2-3 months after they initially form.