Menu...
Home
> Types of Mushrooms
> The Chicken of the Woods Mushroom

Chasing the Chicken of the Woods

One can easily spot the chicken of the woods mushroom by its impressive size and vibrant yellow-orange colors. This large polypore has surprised many a nature lover the first time they found it! Yet did you know they're also edible, and considered a delicacy in some parts of the world?

This mushroom has a lemony, meaty taste. Some think it tastes like its chicken namesake; others describe the flavor as being more like crab or lobster. Whatever your opinion, the chicken fungus makes a great substitute for meat in almost any dish.

It's important to note that this is one of those mushrooms that sometimes causes gastric distress in certain people. If you want to avoid a possible stomach misadventure, only try a little bit your first time to see what it does to you. Also always avoid chicken of the woods growing on conifers, eucalyptus, or cedar trees, as these are reported to contain toxins that can make people sick. 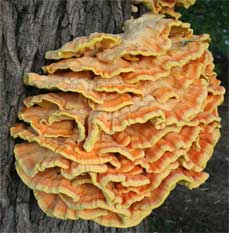 Even if you never plan on eating one, this is a fascinating mushroom. Let's learn a little more, starting with some basic chicken facts. We'll then move on to mushroom identification tips for this species, and close with some cooking advice.

Chicken of the Woods Basic Facts 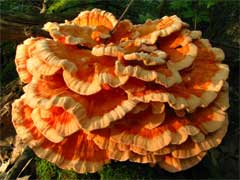 Chicken of the Woods Identification

Chicken of the Woods identification is infamously easy, thus they're considered one of the "safe" mushrooms for beginners. Of course I always encourage hands on education from a local expert, so please don't rely on just the Internet to learn how to identify mushrooms.

If you think you've found a chicken of the woods, check for these familiar features: 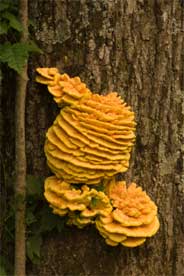 The above are pretty good rules for identifying Laetiporus sulphureus, the chicken of the woods species that grows in Eastern North America. There are slight differences among species but all in all, it's a very recognizable mushroom.

What if you can't find this mushroom, or you don't have the time/impetus to go looking for it? You're in luck! Unlike many gourmet mushrooms that are considered delicacies, the chicken can be cultivated. You can try to grow your own, or purchase one from a specialty grocery store.

So whether found or grown, it's time to move on to the real "meat" of this article.....

So you've found a massive chicken of the woods mushroom, or you succeeded in growing or purchasing one yourself. Now what? 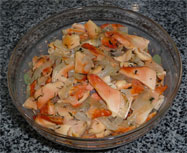 Now it's time to whip up a batch and see what all the fuss is about! Many people consider chicken of the woods to be a delicacy, with their meaty texture and flavor reminiscent of lemon and chicken.

Before we get into cooking tips, I'll mention again that some people have an adverse reaction to this mushroom. A small percentage of those who try it experience nausea, vomiting, swollen lips, or other gastrointestinal unpleasantness.

For this reason it's important to just try just a little bit of this mushroom the first time to see how it makes you feel. Don't scarf down an entire chicken as you may regret it! It's also best to avoid those growing on eucalyptus or conifer trees, as those seem to have a higher propensity towards making people sick.