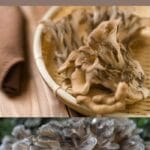 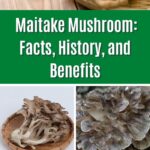 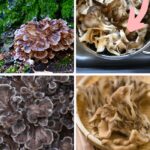 Like reishi and turkey tails, the maitake mushroom has been used for many years as a powerful medicinal. Although known in Japan, it only started gaining attention in the United States in the last 20 years.

Yet unlike its other polypore cousins, maitake is edible and tasty!

Let’s examine Grifola frondosa in more detail. I’ll start with some basic facts and talk about how to eat it. Then we’ll move on to its medical reputation and end with some things to keep in mind when using supplements.

Note that people often confuse the hen of the woods (maitake) with the chicken of the woods, which is a completely different mushroom.

Eating the Hen of the Woods

You may not suspect it at first glance but maitake mushrooms are edible. Many people consider them quite delicious with a strong flavor. Others find it can upset their stomach so try a small amount before you make a meal out of it.

If you’re not cultivating the hen and can’t find it at your grocery store then it’s time to hit the outdoors! Start looking at the base of oak trees near residential areas and at the edge of the woods. As always, make sure you check with someone knowledgeable if you’re not absolutely sure of the mushroom you’ve found.

Since the stem is very tough only slice off the caps for cooking. They should be young and firm, not dry, old, or mushy like the picture to the left. Make sure you wipe them down, wash them, and dry them before eating. The base of a tree is not the most hygienic place!

Once you have clean maitake mushroom caps there’s no limit to how you can cook them! They can be stir-fried, baked, sautéed, stuffed, or made into tea.

One of the most popular recipes is to simply fry them in oil or butter until crisp. Maitake can replace button mushrooms in any recipe for a more flavorful result.

Many people also freeze them before cooking. The mushrooms freeze well so don’t hesitate to do this if you want to save some for later. The frozen caps will get you through the winter until morel hunting season!

Maitake is one of the most promising medicinal mushrooms. Like other polypores, maitake contains polysaccharides that stimulate the immune system.

A polysaccharide is a complex carbohydrate made up of smaller sugar molecules. These sugars stabilize blood pressure, blood sugar, and have an effect on free radicals.

Specific polysaccharides, known as beta-D-glucans, are also suspected to stimulate the immune system to fight cancer. The exact cancer fighting action of these molecules is still not clear and is under study. Rather than attacking tumors themselves, some researchers believe they stimulate the production of T cells to fight the afflicted cells.

An extract of these helpful glucans was patented and is known as the maitake D-fraction. You’ll see this term all over the internet when searching for maitake mushroom supplements. The terms “D-fraction” and “MD-fraction” are simply referring to a concentration of maitake polysaccharides.

So what do these D and MD-fractions do? Research has shown them to regress tumors, especially in breast, liver, and lung cancer. A summary of one such study can be found here. This is just a citation, not an in-depth paper, but it notes improvement in human cancer patients after using the MD-fraction.

In addition to fighting cancer, maitake mushrooms show potential for helping other conditions as well. Studies are ongoing into its action against:

You can start supplementing with maitake by either purchasing an extract of the D or MD fraction or with powdered capsules of the whole mushroom. Doses range from 1 to 3 grams per day, up to 7 for those fighting disease (check with a health practitioner before taking a high dose).

Have you benefited from maitake? Please contact me, I’d love to hear your story!

Things to Keep in Mind

My personal recommendations are the Host Defense brand (more expensive but organic, made by famed mycologist Paul Stamets’ company), or the Nature’s Way brand (a maitake/shiitake blend, cheaper).

Maitake mushroom research is still young here in the West! Hopefully, future studies will reveal more about its medical potential.