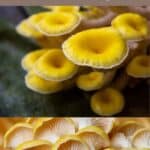 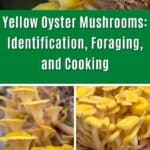 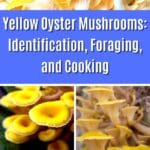 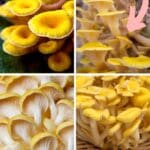 Stumbling across a bunch of yellow oyster mushrooms is almost as good as finding that pot of gold at the end of the rainbow. Yellow oyster mushrooms (Pleurotus citrinopileatus) fruit in huge clumps, sometimes covering entire trees – it is a sight to behold and will have you eating well for weeks. To add to the joy, yellow oysters are very easy to identify out in the wild, so they’re great for even the most inexperienced mushroom hunter.

The History and Origin of Yellow Oyster Mushrooms

Also known as golden oysters, yellow oyster mushrooms are not native to North America. This mushroom species grows naturally in Japan, northern China, and eastern Russia. In those countries, they are highly regarded as a wild edible mushroom and potential medicinal powerhouse.

Due to their popularity, they became an easy choice for mushroom cultivators to grow. But, they didn’t become a common choice for North American growers until the 2000s. Mushroom growers discovered a market for them in farmer’s markets and specialty grocers. These growers usually cultivated them outdoors on logs.

North American mushroom producers grew tons of yellow oysters for markets around the country. And they also sold grow-at-home kits because they’re such a beautiful and easy mushroom for the home grower.

No one knows precisely when the mushroom escaped cultivation and hopped into the wild, but the first recorded sightings happened in 2014. This was approximately ten years after they were first cultivated in North America.

By its technical definition, golden oyster mushrooms are an invasive species. They are not natural to the North American ecosystem, yet they are now growing in the wild and spreading.

However, invasive doesn’t necessarily mean detrimental. Some invasive plant species in this country have been here for centuries, and while they aren’t “natural,” they also aren’t destroying the ecosystem. But, they do have an impact.

The spread of yellow oysters is the first case of a cultivated mushroom escaping and spreading significantly throughout the region. To put this in perspective, the strains of white button mushrooms cultivated in the U.S. for over 150 years have not spread.

The impact on native ecosystems is still unknown. They could be taking valuable habitat from native oyster mushroom species. Or, they could be living alongside the native species without causing severe disruption. There is still a lot to be studied. In the meantime, though, foragers should harvest these with abandon!

How You Can Help Track Yellow Oysters In North America

Scientists know about the spread of yellow oyster mushrooms because of citizen scientists on iNaturalist and Mushroom Observer. These two sites are designed for regular people to record their mushroom finds (or, in the case of iNaturalist, plants and insects too), so the populations, knowledge base, and science can be observed and better understood.

Scientists and mycologists can’t be everywhere and know everything. But, those of us out in the woods, sometimes FAR out in the woods hiking and searching, see so much that no one else does.

If you are not a member of iNaturalist or Mushroom Observer, I highly recommend joining. They’re also a massive help with identification, especially with odd or unusual finds.

And, if you find yellow oysters, report it!! Mapping the spread of these mushroom escapees is key to understanding how they will impact the environment and ecosystem here.

The yellow oyster appears in early spring through fall. It seems they are most common in later summer and fall, but they can appear anytime.

Yellow oyster mushrooms grow on hardwoods and prefer elms. They are also found on oak, beech, and other hardwood species. These mushrooms grow in dense clusters, often covering a lot of space.

These mushrooms only grow on wood, though the log or stump may be seriously decomposed. They do not grow from the ground.

The caps of yellow oysters are bright yellow to a golden brown. They have a dry, velvety surface and thin flesh and range from 3/4″-2 1/2″ in diameter. Yellow oyster caps are slightly indented in the center when young.

As the mushrooms mature, they develop more of an indent which gives them a funnel-like shape. Often, there is a thin line of white flesh at the very edges of the cap. Older mushroom caps may fade to a very light yellow or almost white.

Several to multiple stems emerge from one central bulbous point, which is attached to the tree. This creates the overlapping clumps and tends to force the stems to curve or bend.

There is no well-exercised method for searching out golden oysters since they’re still such a new species in North America. The most likely happenstance is you’ll stumble across them as you’re traipsing through the woods.

The caps tend to be relatively thin and fragile, so take care of foraging them – it’s best if you can keep them in an open basket where they won’t get crushed.

The ringless honey mushroom resembles yellow oysters only from a distance. Their caps are usually tan or dull brown, but they often have light yellow caps as well. This is where the confusion happens.

Once you see the ringless honey mushroom up close, though, the differences will be noticeable. Their caps usually have scales, the gills are whitish or tan, and the stem is tan or pale gray. The stems are also fuzzy-looking and quite long. The gills may run down the stem a little ways but not nearly as much or as vividly as the yellow oyster.

The ringless honey mushroom is edible but is known to cause stomach upset if not prepared properly. Research proper cooking and only try a small amount the first time to see how you react.

This mushroom also shares a passing resemblance to yellow oysters. The caps grow in dense overlapping clusters or separately, starting out brown but turning yellow with age.

The main differences are that G.strombodes has yellow gills that run down the stem a little way and a thin yellow or white stem. When this mushroom species is young and in its brown stage, it likely won’t be confused with yellow oysters.

The edibility of this mushroom, whether it is or not, isn’t clear. But, it’s not very hearty, so even if it is edible, it wouldn’t be great for collecting.

Yellow oyster mushrooms don’t have a distinctive flavor – they are mild and mushroomy. This makes them an ideal recipe ingredient. They won’t overpower a dish but add lots of umami, texture, and meaty richness.

Can I grow yellow oyster mushrooms at home?

Absolutely! This is one of the most common commercially available grow-at-home mushroom kits. Check out our favorite kits and grow kit companies to find yellow oyster and other fun mushrooms to grow at home.

Please be mindful of how you dispose of the substrate afterward, though. Since we now see how easily this mushroom spreads, if you toss it in your backyard, you might be assisting its invasiveness in the wild.

No, there are no toxic lookalikes for golden oyster mushrooms. There are lookalikes, as described above, but they won’t harm you if eaten.