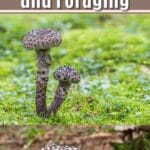 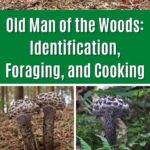 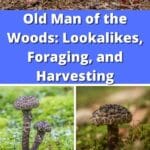 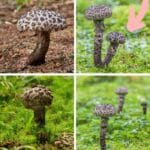 With an odd name like Old Man of the Woods, you may be wondering if you actually want to encounter this mushroom in the wild. The answer is yes, yes you do. The old man of the woods (Strobilomyces sp.) is a decent edible mushroom with a very striking appearance that makes it difficult to forget or mistake. Dark, scruffy, and quite unkempt looking with a fluffy body – the old man of the woods is aptly named.

All About Old Man of The Woods

The old man is a bolete mushroom, which means it has pores instead of gills. Underneath the cap is smooth and flat. The top of the cap is ornamental, with black scales across a cream to dark gray surface. Its stem is woolly, and the whole appearance is very shaggy.

Old man of the wood’s pores are dark gray to black, and so is the stem. The lightest part of the mushroom is the cap surface, which does get darker with age. It can be difficult to see due to its all dark coloring, but it’s easy to identify once you do find it.

The genus name Strobilomyces is from ancient Greek. “Strobilos” means pine cones, and “myces” means mushroom. So this species is the “mushroom that looks like a pine cone.” This is likely a reference to the old man’s scaly top, which does sort of resemble the overlapping scales on a pine cone.

Is Old Man of the Woods Mushroom Edible?

Yes, the old man of the woods mushroom is edible. It’s not one of the finest edibles in the woods, but it’s decent. In the foraging community, it often gets overlooked because it isn’t a grand prize. However, it deserves a little more respect than that.

Old man of the woods is actually quite like a button mushroom in terms of taste. The key is to forage young species. Once they get big, their texture and taste change for the worse.

Old Man of the Woods, A Bad Rap

Many foragers and hunters purposely walk past the old man of the woods, dismissing it as a less-than-desirable edible. It’s true; it’s not the finest culinary mushroom, but it is edible, and it’s not bad-tasting. Mushroom snobs won’t be impressed, that’s for sure. And, if you forage some gorgeous porcini or other fine eating mushroom at the same time, the old man will surely be pathetic in comparison.

However, it’s not so awful when a trip to the woods only turns up this bounty. I’d forage and eat it over having nothing, any day. But maybe my palette isn’t so refined to the “I only eat choice mushrooms” realm. At the very least, it is survivor food to know – if you ever have to live off the forest, you’ll know you can eat this one!

Where Does Old Man of The Woods Grow?

The edible old man of the woods that we know and forage is native to North America and Europe. There are approximately 40 known species of Strobilomyces mushrooms, with many appearing in Asia. However, the edibility of those species is unknown.

Foraging For Old Man Of The Woods

Old man of the woods shows up in summer and early fall. The season usually lasts from July through October, with variances based on region.

The old man grows mycorrhizal with hardwood trees, specifically oaks. This means it forms a mutually beneficial relationship with the tree. It is also found in mixed forests, and there may be species that relate more with conifers. In fact, most findings in New England are around conifers in the pine duff. Whether this is more widespread is yet to be determined.

It only grows from the forest floor, never on wood, logs, or trees. Usually, there are 2-6 within close proximity, but it also commonly grows alone. It doesn’t grow in massive groupings.

Old man of the woods seems to prefer forests, low mountain ranges, and generally hilly areas or inclines. It isn’t often found in lowlands. The old man will grow on forest edges, so it looks like it is growing in a meadow, but this isn’t common.

The dark overall appearance of the old man of the woods is a key identifying factor. Old man mushrooms are dark all over, not just in their caps or stem. Their caps are rounded, like a baked bread bun, and grow 1-9 inches wide. As the old man ages further, the cap flattens out a bit.

The surface color of the cap is cream or off-white to gray. On top of the cap are soft, black, fluffy-looking scales. Around the edge of the cap margin, there are often decorations hanging down – these are the remnants of the partial veil.

Underneath the cap is white pores that turn gray than black with age. They bruise red or black when handled. When the old man of the woods is young, though, the pores are covered mainly by a white veil. As the mushroom matures, the veil breaks apart.

Old man of the woods stems grow 1.5-5 inches long and are equal the whole length – no bulging or bulbing. The stem is gray to black and covered abundantly with woolly shaggy black or gray scales. When the partial veil splits, it may leave woolly rings around the upper portion of the stem.

Younger specimens of the old man tend to have more cream or gray coloring in their overall appearance. It’s not unusual to see an old man of the woods almost entirely black as it reaches peak maturity and heads towards decomposition.

The flesh is initially white but stains pink or light gray very quickly after being cut. After a bit, the flesh turns completely black. Old man’s spore print is blackish brown to black.

The old man of the woods is a common fall mushroom. It can be hard to see, with its dark goth-like appearance, but it isn’t as challenging as other, smaller mushrooms. The old man is most commonly found singularly or in rough scatterings of 2-6 mushrooms. Look on the forest floor around oaks and in mixed forests.

Some say it looks more like a rotting pine cone than a mushroom, especially when it’s solidly in the decomposition phase. Mixed among dead leaves and forest duff, it is easy to overlook and walk right on by.

As with almost all mushroom species, North American identification taxonomy starts in Europe. For centuries this has “worked” in that we have basic identification, but it is far from accurate.

The old man of the woods taxonomy in Europe recently had an upset, and that, in turn, turned the North American identification on its head through the great domino effect. In a nutshell, this is what happened:

Thankfully, regardless of correct Latin naming, all the old man of the woods species look similar. So, really, finding the true and proper name is a task for the myco-nerds (said with love) and not much of an issue for those just looking for a forest edible.

Harvesting Old Man of the Woods

Only harvest young specimens – the buttons — as they are the firmest and have the best flavor. Older specimens are spongy and get very soggy during cooking. Their flavor also isn’t that great.

To harvest, cut the stem off at ground level and put the old man in a safe spot in your foraging bag where it won’t get squished. The old man isn’t an overly firm mushroom and can’t be mixed with heavier mushrooms in the collection basket.

Cooking with Old Man of the Woods

Old man of the woods mushrooms are mellow, like a button mushroom, with a light earthy flavor. They turn whatever they are cooking with a slight grayish or completely black color, just like portabellos do. Be prepared for this, especially if you are cooking them with rice, pasta, or other pale foods. If the color is an issue, prepare the old man of the woods separately and then add it at the end.

Don’t soak the old man of the woods or run them under water for very long. They are genuinely like sponges – great for soaking up flavors; not so great for washing. If they need any cleaning, use a vegetable brush to wipe off the caps and pores. Or, just give them a super quick rinse.

Many people prefer to remove the pores before cooking. This isn’t necessary as much with younger specimens, but it’s recommended with older specimens or ones where the pores are exceptionally spongy.

The stems of the old man aren’t edible. They’re super tough and fibrous and should be removed. Don’t toss them out, though – add them to a veggie stock for some excellent mushroom flavor.

The old man of the woods is best:

Does the old man of the woods have any poisonous lookalikes?

No. In fact, it doesn’t have any lookalikes, poisonous or not.

Why is it called old man of the woods?

No one knows who first coined this common name, but it caught on and is now the name everyone uses. It suits the mushroom’s appearance so well – the old man of the woods looks rather grumpy, withered, unkempt, and like it’s seen some things and been through some tough times.