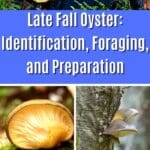 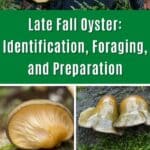 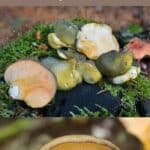 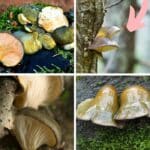 The late fall oyster mushroom earns its common name by being one of the last edible mushrooms to appear. Its arrival is a sign winter is on the way, and the fungi world is slowing down. The late fall oyster is widespread across North America but is predominantly found in northern or mountainous regions.

This wild mushroom with the oyster name isn’t technically an oyster mushroom. The late fall oyster mushroom (Sarcomyxa serotina, syn. Panellus serotinus) looks quite similar to the Pleurotus oyster species. It is a fine edible, just like the classic oyster mushroom, but its scientific designation is a work in progress (to put it nicely).

All About the Late Fall Oyster Mushroom

Late fall oyster mushrooms are distinctive, with olive to dark green caps, half-moon shape, and light yellowish-orange gills. These mushrooms are very dense, a little rubbery in texture, and grow in large groupings. It is also commonly called the Green Oyster or Olive Oysterling mushroom.

Some field guides report these as inedible due to a study by a German mycologist who said they contain carcinogens. This whole debacle is a rumor that spread across the internet, with many people quoting it as fact without doing any research of their own. This author couldn’t find any original source for this, and as far as we can figure out, there wasn’t even a study done in the first place about the mushroom’s edibility (If you have more insight into this, please let us know!).

Late oyster mushrooms are a perfectly edible species, won’t make you sick or anything, and have a nice flavor. Please chime in if you see the mushroom foraging community continuing to spread this myth. This dear mushroom doesn’t deserve a bad rap; it has done nothing to earn it.

In Japan, late fall oysters are highly valued edible mushrooms – they are called Mukitake. In keeping with the mess that is the taxonomy of this species, very recently, the Asian late fall oyster mushroom was reclassified as Sarcomyxa edulis, a different species than the one in Europe and North America.

The Genus Mess of The Late Fall Oyster Mushroom

Late oyster mushrooms have experienced many genus switches. Biologists and mycologists have been at odds as to where it belongs in the fungi kingdom taxonomy. As of 2019, it is officially Sarcomyxa serotina. Previously, it was Panellus serotinus, Pleurotus serotinus, Acanthocystis serotinus, Hohenbuehelia serotina, and Agaricus serotinus. Yes, it has been through that many name changes!

You may still see the late fall oyster mushroom listed in older guide books under the Panellus or Pleurotus genus, as those were the most commonly used designations. And, since the move to Sarcomyxa is still so recent, it is after the publication date of many guides.

Late fall into early winter, primarily October through December. It usually doesn’t appear until the first frosts, and it isn’t uncommon to find it frozen to the tree. It is still perfectly forageable even when frozen.

The late fall oyster mushroom grows on dead or dying hardwood trees and logs, with a preference for oak, poplar, and beech. Rarely is it also found on hemlocks. It often grows in clustered shelves but also regularly appears alone or in scattered groupings.

This mushroom is more common in northern or mountainous regions. In climates with year-round warmth, they are uncommon.

The cap is half-moon, oyster shell-shaped, or semicircular and olive green to dark green or brownish. The coloring varies quite a bit and sometimes is pale, but it always has at least some tinge of green or yellowish-green.

The caps range from 1-4.5 inches wide. They are smooth and bald without any decorations. They usually are shiny and sticky, especially when wet, but can also be dull and faded with age or when they’re past maturity.

Caps often grow distorted or abnormal as they are crammed together and fighting for space on the tree. They also tend to grow in gaps between bark or underneath bark so the space is tight. It isn’t unusual to find them in all types of contorted shapes, yet still basically rounded, dense, and semicircular. They tend to look like horse hooves attached to the side of a tree!

Late fall oysters don’t have distinctive stems. Usually, there isn’t one at all, but sometimes there is a thick, dense little stub where it attaches to the wood. The stem, or what passes for one, is velvety and usually remains green even as the rest of the mushroom changes color. The gills are creamy light yellow to orange to slightly brownish, and grow very close together.

The flesh of late fall oyster mushrooms is dense, white, rubbery, and pretty tough. It doesn’t change color when the mushroom is cut.

After your region has gotten its first frost or two, keep an eye out for olive-green half-moon-shaped growths on dead logs or dying trees.

Late fall oyster mushrooms have a mild or neutral flavor. They can be a bit bitter and need a long cooking time to make them a good edible. Cooking softens them up and improves their flavor. They are excellent for adding to stews or as a meat substitute due to their denseness – they’ll bulk up anything you add them to.

The texture of late fall oysters is off-putting to some people who claim it is too rubbery. In this, it is similar to squid or octopus – a bit rubbery and dense without a ton of flavor, but it takes up flavor well. In fact, it makes an excellent substitute for squid or octopus in recipes!

These mushrooms, especially more mature ones, do best with at least 15 min of cooking. You can saute or boil them and then add them to a recipe. Younger ones can be quite tender and don’t need such a long cooking time.

Yes. Companies like The Mycelium Emporium in Maine (USA) sell spore syringes for you to propagate late fall oysters at home.

Yes, but please read the cooking instructions above to learn to prepare them properly. There are no issues with toxicity, but the mushroom can be a bit dense and rubbery. Proper preparation makes it more enjoyable to eat!