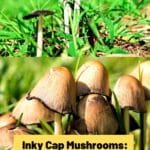 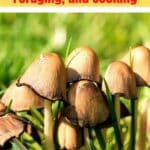 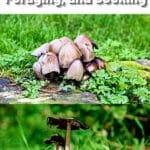 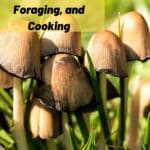 The inky cap mushroom is a well-known and common fungus appearing across North America. The common inky cap (Coprinopsis atramentaria) isn’t the only mushroom species that dissolves into a puddle of black goo at maturity, though. The inky caps mushrooms of North America are many, so don’t be surprised to see some of these black goopy treasures while out in the woods.

The common inky cap is edible, though it MUST be prepared the same day it is foraged unless you like cleaning up melted mushrooms in your fridge. It also cannot be consumed with alcohol or within 2-3 days of drinking alcohol (on either side), as it will make you quite ill.

All About Inky Cap Mushrooms

When young and still appealing, the common inky cap mushroom is actually easily overlooked. It is small, gray, and rather unremarkable, except that it usually appears in massive groupings. The magic happens when it matures; the cap starts to liquefy into a jet-black, dripping, melting mess until it is completely dissolved.

The common inky cap, Coprinopsis atramentaria, used to be known as Coprinus atramentarius, and in many guidebooks, it is still listed under its older scientific name. The newer name came about in 2001 after DNA analysis showed it did not belong in the Coprinus genus. So, for certain, any identification guides previous to 2001 will have the older name.

Interestingly, not all fungi that turn into black goopy, melted messes are in the same family, as previously thought. It turns out that genetically, inky mushrooms are spread out over four genera, with their similar physical features being just coincidental. Nature does not work by the rules we think it should all the time! This type of development, of similar and what we may consider defining traits evolving among separate independent species, is known as convergent evolution.

The common inky didn’t just get its name from how it looks; the black goop was actually used as ink. In fact, the Latin name atramentum means black liquid or ink. The black goo was boiled with water and cloves to make the ink usable for writing. Or, sometimes, urine. Interested in making inky cap mushroom ink? Check out this fantastic guide to making ink from inky caps.This making ink guide is also great, but the author misidentifies the mushroom – the one he is using is the shaggy mane, but the process is the same.

For foragers looking for edible species, the Shaggy Mane mushroom is the most sought-after type of inky cap species. Shaggy manes are more substantial and have a wonderful, tender texture. Check out our guide to shaggy mane mushrooms to learn more.

If you consume alcohol, be super careful with this mushroom! The inky mushroom contains coprine, which is poisonous when combined with alcohol. It isn’t poisonous in that it will kill you, but it will make you very ill, almost to the point where you might wish you were dead.

The reaction between fungus and alcohol consumption heightens the body’s sensitivity to ethanol. Some report that even using an alcohol-based aftershave will cause a reaction – that’s how sensitive the mushroom makes a person.

Symptoms of coprine poisoning include hot flashes or flushing around the face and neck, rapid heartbeat, tingling of the extremities, and swelling (or the feeling of swelling) in the hands and face. These symptoms are usually followed by nausea and vomiting. Some people experience vertigo, weakness, hallucinations, and confusion. The symptoms of poisoning usually run their course after a few hours, and there is no need for treatment.

The intensity of the symptoms is directly related to how much alcohol is consumed. Symptoms usually start within 5-10 minutes of eating the mushroom; it is a fast actor. The treatment for this poisoning is to wait for it to pass (this will likely include reassuring the patient that they are not dying), drinking lots of water, and monitoring symptoms.

The potential of alcohol poisoning isn’t just a problem the day that you eat the mushroom. You must avoid any alcoholic beverages 2-3 days after and before eating the mushroom, as well. Due to this severe side effect, inky cap mushrooms are also commonly known as tippler’s bane (tippler is an outdated name for someone who habitually drinks alcohol).

Interestingly, the anti-alcoholism drug disulfiram operates in much the same manner, heightening the body’s sensitivity so that consuming alcohol of any type literally makes you sick.

This mushroom fruits anytime from late spring into autumn. They may even appear in winter in warmer southern climates.

Inky cap mushrooms grow in many different habitats. They are saprotrophic, gathering their nutrients from dead or dying organic material in all types of environments. The inky cap mushroom tends to prefer rotting wood, often that is buried underground. This feeding off buried decaying wood makes it look like the fungus is terrestrial, growing from the soil, but that is not the case. It is not uncommon to dig under a patch of inky caps to find the original source of buried wood, roots, or stumps.

Inky caps fruit in meadows, lawns, disturbed ground, forest edges, vacant lots, open spaces, and really, anywhere they want. They love to grow in dense clusters around stumps. These fungi have even been seen pushing up through asphalt and tennis courts!

The common inky cap is very widespread across North America in urban and rural habitats. They’re known to fruit in the same location several times in one year as long as there is plentiful rain.

Inky caps start out as rounded egg-shaped gray figures. The cap covers the stem when they first appear, so all you see is the gray “egg.”

Shortly, the stem lengthens to show a cap like a little grayish bell with faint groves running down it vertically. The groves or lines aren’t always obvious, but you’ll see them upon closer inspection. It’s a small mushroom with a cap that is only 1-2.5 inches tall. The cap is smooth or might have a bit of scaliness over the top center.

As the mushroom matures, the edges start curling upwards and turning black. It looks quite tattered at this stage. Eventually, the cap edges lift up entirely, making it almost flat. The edges turn into a dripping black mess, and then the whole mushroom starts to dissolve.

The process of fruiting to dissolution usually occurs in 24-48 hours, which is why it’s necessary to harvest these immediately if you see them. In a few hours, they could be beyond edibility.

When young, the gills are whitish. Then, they turn black and start to melt and become inky. At the final stage, the gills and cap merge or melt together, so it is difficult to tell them apart.

The stem on the inky cap is white, very fibrous, and hollow in youth. It averages 3-6 inches long, is slender, and may have fine hairs covering it. It may also be smooth.

This mushroom’s flesh is pale gray or whitish, soft, thin, and fragile. It does not change color when cut. But it does turn into melted black ink as the mushroom matures.

Rarely do inky caps fruit individually, so be on the lookout for very populated clumps of unassuming small gray bell-shaped mushrooms. The clumps are often in different stages of decomposition, so you’ll see lovely young specimens alongside ones starting to turn black around the cap edges or completely melted. That’s a surefire way of identifying these mushrooms, seeing them in all the stages at once.

Inky caps fruit after rains and disintegrate rather quickly. So, if you want to find some in good condition, look soon after the rains stop.

In North America, there are many species that liquefy into black inky messes, just like the common inky cap. Some of these species are related to the common inky cap, while others just share common attributes. All of them fall under the umbrella of “inky cap” to the forager because it is a key identifying feature.

Determining which type of inky cap you’ve discovered can be complicated. This is just a short list of some more common species and their identifying characteristics. In general, the world of inky caps still needs a lot of research, especially in this country.

This is not a complete list of all the inky-cap-esque mushroom species.

Coprinellus micaceus (Mica cap) – This inky cap species is brown or amber-colored instead of gray, like the common inky cap. It also has very fine granules on the caps that cause it to glisten, but these often get washed away in heavy rains. It is widespread across North America and a common sight in spring and fall. This inky cap species is edible without any issues; it does not contain coprine.

Coprinopsis lagopus (Harefoot mushroom) – Another widespread inky cap, this species features a very densely hairy cap. The underlying cap color is gray or black, and the hairs are silvery. As the cap expands, the silver hairs break up to create patches. The hairs may disappear completely when the mushroom is fully mature. This species is edible but so small, with thin flesh, that it isn’t considered worthwhile.

Coprinus calyptratus (Star-capped Coprinus) – An inky cap found primarily on the West Coast, C. calyptratus has a super long stem that is often buried deep in the sandy soil it prefers. It also has a brown or whitish star-shaped patch on the center of the cap. This patch is usually covered with sand. Edibility is unknown.

Coprinopsis variegata (Scaly inky cap) – Another shaggier version of the common inky, the scaly ink cap (or feltscale inky cap), features whitish or yellowish scales. As the mushroom matures, the scales flake off to reveal a grayish undersurface. It is when it is mature and gray that it may be confused with the common inky cap.

The stem is white and often has a cotton-like ring around it. It is thick, hollow, and also white. Scaly inky caps appear almost exclusively in June and July east of the Great Plains. The edibility of this species is undetermined – some say it’s great, and others say it’s poisonous. It likely contains the same coprine as the common inky cap and should not be consumed with alcohol.

If you’re out on a hike and think they’ll last in your pack for a few hours until you get home, think again. They start decomposing immediately after picking. Believe me; you do not want that mess in your mushroom basket!

They are also prone to being squished, bruised, and smashed during transport, so harvest and transport them with care. Use a separate rigid-sided box or basket for the best results.

Choose inky caps that are still very young, preferably while they’re still in that egg-shape before their stems start to really grow. That’s when they’re the best eating.

Cooking with the Inky Cap Mushroom

These mushrooms MUST be prepared the same day they are foraged. They disintegrate into a black goopy mess very quickly. It’s even better if you can prepare them immediately after harvesting. For example, pick from your lawn and immediately put them straight into the frying pan.

It is possible to extend their life slightly by storing them in ice water, but it will only extend the time by maybe a day. Even if you don’t have plans for the mushrooms, cook them asap and then store them cooked – this is the best way to keep them for a few days until they can go in a recipe. They also freeze well after being cooked.

Can I eat inky caps raw?

No, it is not recommended. Cooking

No. Make sure you have identified the species correctly before consuming. None of the inky caps are deadly, but some will cause gastrointestinal distress or allergic reactions.

« Amber Jelly Roll Fungus: Identification, Foraging, and Uses
How to Be A Successful Mushroom Forager »