What Are Indian Pipes?

People often show me pictures they've taken of indian pipes, proudly displaying their photographic fungal acumen. Imagine their surprise when I tell them that it's actually not a mushroom, but a unique organism known as the "ghost plant".

That's right, a plant! I used to think they were mushrooms too. Yet these beautiful ghosts are actually perennial plants that lack chlorophyll, a feature that gives them their pale white color.

Although not a mushroom, I felt indian pipes deserved their own page to clear up some of the confusion about these crazy perennials. We'll start with some basic ghost plant facts, and then look at some of their unique features such as how they feed themselves and why they're cheaters.

Now you may be wondering how a plant with no chlorophyll survives. Read on to learn more!

Getting to Know the Ghost Plant

What's a ghost plant to do when it contains no chlorophyll and gets very little sunlight? You steal energy from others! With this process:

We were taught in school that all plants contain chlorophyll, a green pigment critical for photosynthesis. Photosynthesis is the chemical process that uses energy from sunlight to convert carbon dioxide into necessary sugars, allowing the plant to feed. 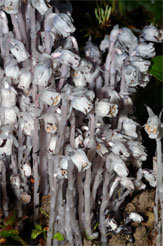 Very simply, with chlorophyll and sunlight a plant can produce what it needs to nourish itself.

Yet there are some glorious exceptions to this rule. Indian pipes are known as myco-heterotrophs, which are plants that get their food by parasitizing other fungi instead of through photosynthesis. It does this by linking its roots with the mycelia of a fungus. 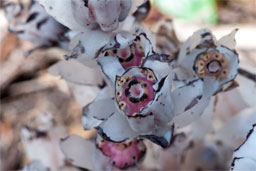 Once it's connected to the underground threads of a fungus, it can interrupt the flow of nutrients and feed itself. It gives nothing back to the fungus in this exchange, and takes what it needs to survive.

Yet the ghost plant doesn't parasitize just any mushroom. It prefers those from the Russulaceae family, which include the Russula and Lactarius genus. The next time you see these white plants be sure to look around the area. Do you see any Russula or Lactarius mushrooms nearby?

Myco-heterotrophs are sometimes called "mycorrhizal cheaters", meaning they form what looks like a mycorrhizal relationship but give nothing back. In this case the indian pipe steals from both the plant and the tree. Making it, like your brother in law who raids your fridge and leaves nothing in return, a true parasite.

The first picture was taken by Jrg1000 and is from Wikipedia under the Creative Commons CCO 1.0

The second picture was taken by Jerry Friedman and is from Wikipedia under the Creative Commons Attribution Share-Alike 3.0 License.

The third and fourth pictures were taken by Matthew S. Staben and are from Wikipedia under the Creative Commons Attribution Share-Alike 3.0 License.