The Deadly Death Cap and Other Amanita Mushrooms

With names referencing death and destruction, it's no wonder the Amanita mushroom genus contains some of the most famous and deadly of all poisonous mushrooms. The death cap (Amanita phalloides) is suspected to have caused more mushroom poisoning deaths than any other species!

Yet what makes some amanita mushrooms so poisonous? Certain species of Amanita contain amanitin, a deadly amatoxin.

Amatoxins are some of the most lethal poisons found in nature. These toxins work by slowly shutting down the liver and kidneys. Often the victim will appear sick at first, and then seem to get better. Unfortunately the amatoxins are still at work, and death may occur anywhere from a few days to a week after ingestion. 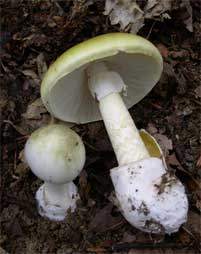 This poison knows no real antidote beyond treating the victim with an extract of milk thistle. Milk thistle protects against liver damage from toxins, and is one of the treatments for amanita mushroom poisoning.

Despite this treatment, it's said that one cap of a death cap is enough to kill. Given the danger, we'd better learn some poisonous mushroom identification! Visit this page to learn how to identify poisonous amanita mushrooms in general.

Remember: Never solely identify any mushroom based on what you've seen on any website (including this one) or by comparing it to a picture in a book. Always obtain hands-on expert help when identifying a new mushroom and never eat anything you're not sure of!

Because they form as a small button, an amanita may sometimes be mistaken for an edible puffball. This is why it's essential to slice a puffball open before eating it. Puffballs are white and solid on the inside with no gills. If you see gills, you may have an amanita on your hands.

Once the mushroom has grown, the sac-like remnants of this universal veil are still an important identification characteristic. It's often underground so you may have to dig carefully around the base to find it.

However, never assume that you don't have an amanita mushroom just because you can't find the sac. It may have disintegrated or broken away. Use all features for poisonous mushroom identification, not just one!

Late August through November, or whatever passes as late-summer to late fall in your area. 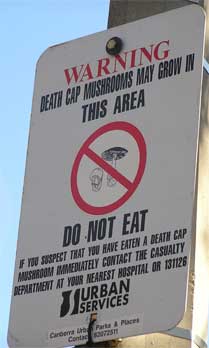 Assume the death cap, or some other poisonous mushroom, lives where you live!

No page on poisonous mushrooms would be complete without discussing the death cap's deadly cousin, the destroying angel.

The term "destroying angel" actually refers to a few all-white poisonous mushrooms in the Amanita genus. They are: 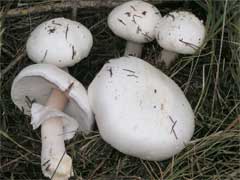 Amanita virosa is known as the "European destroying angel". There is some disagreement as to whether this mushroom exists in the United States.

Destroying angels are sometimes mistaken for edible mushrooms such as young puffballs, button mushrooms, and meadow mushrooms. Thus it's important to learn how to identify them.

The destroying angel is very similar to the death cap in terms of identification. The biggest difference is that they're all white, with no green or yellow tint. They're recognized by their rounded base, white color, and smooth cap. One bite of these may contain enough amatoxins to kill!

Of course, not every species in the Amanita mushroom genus is poisonous. Some, such as Amanita caesarea (Caesar's mushroom), are edible. Yet given the danger involved in eating the wrong amanita, it's best to avoid the genus entirely unless you really know what you're doing.

It's important to learn how to recognize Amanitas (especially the death cap and the destroying angel) if one is going to start eating wild mushrooms. Proper knowledge can prevent a fatal mistake!

The first picture was taken by Archenzo and is published on Wikipedia under the GNU Free Documentation License.

The last picture was taken by Eric Steinert and is published on Wikipedia under the GNU Free Documentation License.