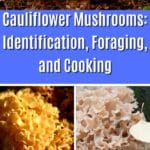 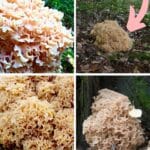 The cauliflower fungus is a top edible species with no lookalikes, not even non-poisonous lookalikes. This makes it an excellent beginner mushroom because it is virtually impossible to misidentify it. The problem – they’re super hard to find!

All About Cauliflower Mushrooms

Sparassis crispa, the type species of this genus, was the scientific name applied to almost all North American cauliflower mushrooms until relatively recently. Of course, as it turns out, this is primarily a European species. So, any guidebooks you read that are more than ten years old most likely still use S. crispa for the cauliflower fungi species here. If you want to get more into the myco-nerdiness of this species, check out the evolutionary Cauliflower Tales, published by Ron Peterson and Karen Hughes.

Cauliflower fungi are parasitic and saprobic, which means they attack, decay, and feed off dead and dying organic material. It is a weak parasitic species, though, that takes years (or decades) to kill a tree. This mushroom is found at the base of trees, growing in association with specific tree species.

When it comes to the overall look of this fungus, I’m with Michael Kuo – the cauliflower fungus looks a lot more like someone dumped a massive clump of wide egg noodles on the ground, not like a cauliflower vegetable. However, when you cut the mushroom in half, it does sort of kind of resemble a cauliflower stalk a bit more. The coloring is correct, anyways.

The overall appearance of the fungus is rather bizarre and very un-mushroom-like, especially if you’re mainly accustomed to button mushrooms and the like. The cauliflower fungus grows in a generally rounded shape with many flat, wavy lobes intertwining and overlapping. It looks like a mass of lasagna or egg noodles that just came out of boiling water and were plopped on the forest floor.

Cauliflowers can get quite large. They average 4-10 inches wide, but enormous 24-inch wide specimens happen, too. Imagine finding that mushroom!

When the mushroom is young, the lobes are rubbery and tough. As it matures, though, the lobes soften. It is best foraged and harvested when young and fresh, as it stands up better to cooking and tastes better.

The biggest issue folks experience when seeking this top edible species is actually finding one. They’re not rare or endangered, just relatively uncommon. They’re a widespread species, growing all across North America, but are few and far between.

It depends on the species and climate, generally summer or late summer through late fall or winter.

Cauliflower fungus bodies grow in conjunction with specific tree species. Usually, they’re found at the base of or very nearby a tree or tree roots. This is because they attach to the tree roots underground, either as a parasite or saprobe, or both.

These mushrooms only grow on the ground at the base of a tree. They never grow on the tree trunk.

Cauliflower mushrooms fruit in the same locations year to year. So, if you find one of these jewels of the forest, mark the spot! They may not appear every year, but they will likely appear multiple times as long as the tree roots can provide nutrients.

Cauliflower fungus species range in color from creamy white to yellowish-gray to light yellow-brown. Most grow as overlapping lasagna noodle-looking balls, but some have a bit more structure. They range in size from 4″ wide to as big as 25″ wide (or bigger..?).

It’s best to forage this mushroom when it is primarily white. As it matures, it deepens in color, and the taste isn’t as good.

Exactly the same as S. americana above, except it occurs in the southwest in association with Ponderosa pines. It is ecologically and geographically distinct but is not a completely separate species.

This used to be considered a unique species (S. herbstii) but is now shown to be a variant of S. spathulata with thicker branch tips.

Cauliflower mushrooms are a little crunchy, with a texture akin to al dente noodles. They wilt with cooking, not holding their shape that well. Their flavor is earthy and slightly nutty but overall neutral, i.e., not super strong or distinctive.

The many folds of the fungus hide all sorts of dirt, forest debris, and bugs. Cauliflower fungi need a good cleaning to get all the bits out. Running water and a good toothbrush work well to get in between the folds and get rid of the dirt. Breaking off sections and swishing them around in a bowl of water also works really well.

This fungus dehydrates and reconstitutes wonderfully, which is excellent news if you’ve found a huge specimen. You can absolutely preserve it for later use in soups, stir-fries, and pasta dishes.

Cauliflower mushrooms contain a lot of moisture, which is best cooked out before use in a dish. Dry sauteeing is the best option. If you cook them straight away with oil, butter, or broth, you’ll end up with a very watery dish.

Can I grow cauliflower mushrooms?

Yes. Several companies online offer liquid culture and sawdust spawn to inoculate your own logs and grow this mushroom. It is not for the beginner grower, though; i.e., there are no easy grow kits. Cauliflowers are becoming more popular as a cultivated mushroom, especially in Asia.

The cauliflower mushroom is prescribed in traditional Chinese medicine to stimulate the immune system. It contains antimicrobial and antiviral properties, as well as neuroprotective attributes.

How these properties interact and relate to human health is still being studied. There are not a lot of human subject studies to draw from at the moment.