I get a lot of emails from people wanting help with mushroom identification. Unfortunately, identifying mushrooms from just a picture and a brief description can be very difficult.

Since there are so many factors to consider, I built this page to show beginners the thought process associated with identifying different types of mushrooms. There are some crucial factors to observe besides just color and size.

I'd divided this page into two sections. The first outlines things to look for when finding a new mushroom. The other contains five examples of mushroom identification. These lists and examples are by no means exhaustive, but they do give you a good feel for the basic process.

As always, never eat anything based on what you read here or anywhere else on the Internet. Nothing takes the place of hands-on instruction!

These are in no particular order. Click on the links to learn more.

There's much more to note about a mushroom than just these eight things. Some mushrooms display a chemical reaction when exposed to certain substances. Others are distinguished by microscopic characteristics.

For our purposes of beginner's mushroom identification, learning to examine these eight is a good start.

Below are five different mushroom examples. Follow along and apply this type of analysis to your own finds!

. Pick up a highly rated guidebook for your region if you don't already have one.

I found all of these mushrooms in New Hampshire or Vermont.

No, it's not that weird guy who lives in the forest behind your local bike path. This is a good beginner mushroom. 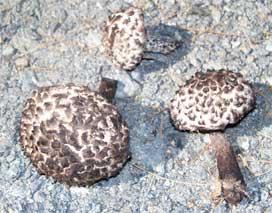 Gills: None. A spongy layer of pores was on the underside of the cap instead.

Cap/stem: Distinct from each other, with white and gray coloring. The cap is convex, with a layer of woolly scales on the top.

Bruising: Reddish at first, then slowly turning to black.

Habitat: I picked this just off a trail in a mixed hardwood forest. It was growing alone on the ground, not on a tree.

Easy to identify due to its unique cap and the presence of pores, this is a great example of a bolete. Boletes are defined as having a separate cap and stem with a spongy surface of pores. To be sure, I checked for the appropriate colors after bruising.

It's definitely worth knowing how to identify the delicious chanterelle. See this page on chanterelle mushroom identification for a more in-depth article.

Gills: None. Instead there were wrinkled folds known as "false gills". This is very important to look for with chanterelle identification. The pic to the right is a good example.

Cap/stem: The caps were slightly vase shaped. The stems had no bulb or ring and were not hollow. Both were an orange-yellow color. 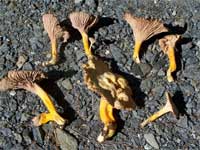 Habitat: On the ground at the edge of a trail in a mixed hardwood forest. I found more than one, but they did not grow in clusters.

The false gills, and the fact that they weren't growing in clusters, led me to believe these were chanterelles and not poisonous jack o'lanterns. I did eat these, and they tasted great!

This was a fun surprise. When I saw it from the road it looked like an oyster mushroom. A closer examination revealed something else! 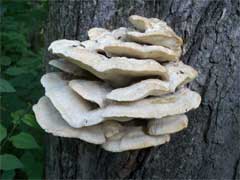 Gills: None. Instead there were small "teeth", or spines, hanging from the underside of the cap. This made identification fairly easy.

Cap/stem: No stem. The caps were a series of overlapping, shelf-like fruiting bodies. They were whitish and very tough.

There aren't as many mushrooms with teeth as there are with gills, and fewer still that grow on trees. The other clue here is habitat, as I found it growing on a dying maple. The northern tooth is a parasite that rots the heartwood of maple trees.

Below is a close-up of the tiny teeth. 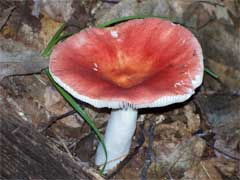 Gills: Gills were white and attached to the stem.

Cap/stem: Cap was red on top and slightly upturned. The stem was white with no ring.

Habitat: Found growing on the ground among leaf litter in a mixed hardwood forest.

Smell/taste: Smelled fruity but the taste was very bitter.

The spore print, white gills, and red/white color combination indicates a mushroom in the Russula genus. Yet which one? Russula mushroom identification is very difficult, with microscopic information sometimes needed. I decided on one of the more common species that fit the description, Russula emetica.

My apologies for the washed out picture. 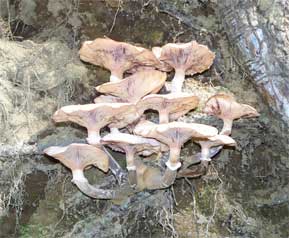 Gills: Brownish and attached to the stem.

Cap/stem: The caps were slightly convex with a lightish brown color. The stems had a ring around them and were brown-white.

Habitat: Growing in a thick cluster on the roots of an overturned oak tree.

Although these mushrooms matched all the characteristics of a honey fungus, I still took a spore print. A white spore print is an essential part of honey fungus identification.

I didn't want to bore you with too much detail, but you can see the kinds of observations that you need for mushroom identification. Try to note all that you can when in the woods. Now go out there and start observing your own mushrooms. Let me know how it goes!