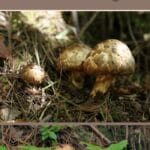 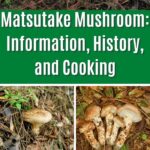 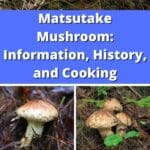 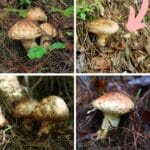 No discussion about edible mushrooms would be complete without mentioning the elusive matsutake mushroom. Every year between September and January, pickers on the West Coast of North America search for this spicy-smelling mushroom with a passion usually only reserved for morel hunters.

These mushrooms are big business, with the majority harvested being exported to Japan. These edible mushrooms are prized in Japan, both for their flavor and meaning. To this day they’re still given as important gifts, meant to symbolize fertility and happiness.

Yet it’s not only the Japanese that love these pine mushrooms. Matsutake are held in high regard the world over for their powerful flavor and odor. They’re a sensory adventure often referred to as “spicy”, “intense”, or “like cinnamon”. Although some would prefer the terms “foul” or “pungent”!

These words do little justice to the true spicy intensity of the mushroom, which is better experienced than described. Few people have a moderate opinion here; they either love them or hate them.

A closer look will tell us more about these unusual specimens. We’ll start with some basic facts, and move on to their status as a famous edible mushroom. We’ll end with a discussion of some of the culture and controversy surrounding their collection.

When cooking with a matsutake mushroom, one should consider a rule applicable to so many things in life: less is more. Sometimes the flavor is so pungent it can overwhelm your dish. Better to start with a small amount and work your way up.

This is a meaty mushroom that works well in many different types of recipes. It can be an acquired taste, so I’d recommend trying it in a few dishes before you decide that it’s too spicy or weird.

Pine mushrooms become heavy and wet when washed with water directly. Wipe them down thoroughly with a damp cloth or paper towel before cooking, rather than soaking or putting them under running water.

As much as I love Japanese food, I’m admittedly no expert at cooking it. That’s why I like preparing matsutake gohan, a Japanese rice dish made with pine mushrooms. It’s easy, tasty, and showcases their unique flavor.

Clean the mushrooms with a damp cloth and cut them lengthwise into 1/8” pieces.

Add all the ingredients in a small cast-iron or stainless steel pot. Stir them well, and let them sit for 20 minutes to an hour to let the flavors start melding.

Bring the mixture to a boil by turning the heat to high. When it starts boiling, reduce the heat to medium-low. Cover the pot with a lid and let it simmer for 20 minutes.

Turn off the heat, but keep the lid on and let the dish cook for another 10 minutes or so. Then remove from heat, fluff, and wait until it cools to an edible temperature.

This recipe is really simple but really good! It’s an easy matsutake mushroom recipe that serves as a good introduction to their complex flavor.

There are some definite controversy and competition over pine mushrooms. This all stems from the fact that they’re mycorrhizal.

A mycorrhizal mushroom is one that forms a symbiotic relationship with the roots of trees or plants. This relationship benefits both parties, as the mushrooms receive sugars from the trees and the trees get access to more nutrients and water. Think of the mushroom mycelium coating the tree roots as fingers extending their reach.

The problem? This is a very complex relationship, one not fully understood by modern science. Simulating this is difficult to impossible in a lab or outside. It has to happen naturally, which means that matsutake, sadly, aren’t cultivated commercially.

When cultivation isn’t possible, we must turn to collection to get our fungal fix. Given the high demand for these mushrooms and the high price they fetch, the industry around picking them is very cutthroat.

The demand for these mushrooms has lead to a few big concerns:

Some say that environmental damage isn’t such a concern. I disagree!

Mycorrhizal mushrooms help keep a forest healthy, and trees strong. If you weaken one link, others are sure to break down as well. Trees may die. Animals can suffer. The food chain is affected as nature’s balance is plunged into a downward spiral.

We don’t know the long-term impact of removing so many mushrooms from wild areas, especially younger ones that may not have dropped spores yet. Given how everything is connected, I find it hard to believe that this wouldn’t eventually be damaging to a forest.

Thus it’s important to respect matsutake as you would any mushroom. Don’t pick more than you need. If picking commercially, leave some in every patch so they can drop their spores and propagate.

If you want to learn more about matsutake mushroom identification and picking, I’d recommend checking out the Matsiman website. This site has tons of great information presented from a respectful standpoint.

Hopefully this article has piqued your interest in matsutake mushroom. The next time an adventurous culinary spirit hits you, give them a try!

« The White Button Mushroom: More Than Meets the Eye!
Little Brown Mushrooms and The Deadly Galerina »