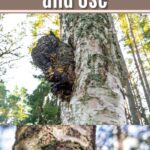 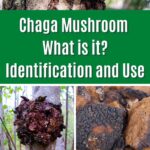 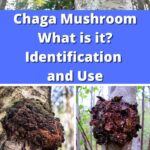 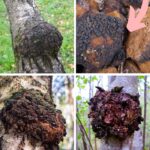 This species, Inonotus obliquus, is a parasitic fungus that grows on birch trees. It has a long history as a medicinal mushroom in Russian and Polish folk medicine.

You may have seen one before and not even known it. It appears as a large, black, burnt-looking mass sticking out of the side of a tree. Perhaps you’ve even marveled at one, feeling sorry for the tree, as it appears to have some sort of extra-terrestrial, creepy growth bursting out of it.

Yet this growth is not technically even a mushroom! Rather than a fruiting body, it’s just a big, hard ball of mycelium. Mycelium is the actual organism behind a mushroom. If you think of a mushroom as an apple, mycelium is the tree that causes the apple to fruit with the intention of reproduction.

This article will explore this fascinating fungus and try to answer some questions. What health conditions will it help? How do you get it and how much should you take? And just what the heck does “chaga” mean anyway!?!

Chaga as a Medicinal Mushroom

You might not think that a gnarly black mass would be all that healthy, but the use of chaga as a medicinal mushroom dates back to the 16th century (possibly earlier).

Inonotus obliquus appears in Russian folklore as a treatment for a variety of ailments and as a general tonic. It is also popular in Poland, Finland, and other regions of Eastern and Northern Europe. You may have heard of “Siberian Chaga”, as birch forests in Siberia are said to produce the world’s most powerful strain.

What are the health benefits of chaga? As with so many medicinal mushrooms, there’s a lot of hype and confusion. Yet more research is now beginning to confirm what folk medicine has claimed for years:

It’s worth noting one famous study reported that the anti-tumor activity was only active after a lengthy heating process, not just from steeping a simple tea from the raw material (Lucas, 1959 from Hobbs’ “Medicinal Mushrooms”).

What are the side effects of chaga? Not many. The only warning I was able to find in my research was that, due to its immune stimulating activity, those on immune suppressing drugs for organ transplants probably shouldn’t take it.

The medicinal actions of this “mushroom” are due to its high levels of Beta-D-glucans, a type of polysaccharide (long-chained carbohydrate molecule). It also contains other chemicals that stimulate the immune system such as triterpenoids, phenols, sterols, and enzymes.

Why is chaga so powerful and why does it make these chemicals in such abundance? The theory is that is needs them to survive in its natural habitat: cold birch forests.

By strengthening itself and the tree, it can keep them both alive in harsh winters so that it can continue to feed. And when you’re trying to thrive in the Siberian forests, you want as powerful an immune system as you can get!

Yet for all these wonderful molecules and immune boosting power, it isn’t without controversy. I believe in chaga as a medicinal mushroom, but I think we should be wary of any product advertised as a cure-all.

The disagreements over Inonotus obliquus don’t end with advertising:

This can be very overwhelming! What’s an environmentally responsible person who wants to be healthy but can’t get the time off from work to fly to Siberia to do!?!?

My advice? Do your research but don’t get overly analytical unless you have a serious health condition such as cancer (then you may want to seek out wild-harvested chaga that’s been prepared for such conditions).

I do think there are good products on the market. Just experiment and see how you feel! The hype around this mushroom is immense, so do your research with a specific health benefit in mind (I’ve done some of this for you below).

For more information on the history, research, and science of Inonotus obliquus I’d highly recommend checking out this page.

Where to Find Chaga and How to Dose

There are a number of different ways to start supplementing with chaga, most involving preparations made by different companies.

It’s generally accepted that the tea is used as more of a daily tonic, but if you have a health condition something stronger is recommended. Try making a tincture, extract, or pills instead.

Although easy to find in many parts of the world, it’s not always so easy to harvest. If you find it growing on a tree and if you’re sure it’s chaga and if it’s within reach, you’ll probably want to give up after a few minutes of hacking at it with a knife. This is not a soft little mushroom but a hard mass that’s difficult to remove.

Thus for some it’s easier to just buy a prepared product. Yet be careful! As we know, not all herbal products are created equal.

Below explores some of the main ways to take your fungus and how to do it. Evaluate with respect to what you think is best for your health, wallet, and level of patience!

Choosing The Type of Chaga

Many places will sell you chaga in small pieces or in a pre-ground powder. This route is often my favorite way to take medicinal mushrooms, as you can usually get way more of the actual product for the same price as purchasing a bottle of pills.

Make sure your powder comes from a reputable company that uses ethical harvesting practices.

I find the Sayan brand powder to the the best. It’s wild harvested, and gives you a noticeable energy boost. The product on the right is about a month worth of powder for about $23.

Once you have your powder you can:

Would you rather spend a few extra bucks to save time preparing your medicinals? I can respect that. I love making my own concoctions, but I know some people just aren’t interested or don’t have the time.

Fortunately there are many mushroom products out there, but unfortunately that means you have to wade through a lot of junk to find the good ones.
Look for a product that:

Some of the preparations you can purchase are:

How To Harvest Your Own Chaga

Harvesting your own chaga is free if you have the time, tools, and knowledge. You will need some sort of axe, as removing them can be difficult. You may also need a ladder to reach them, something I don’t do. (I hate those unstable death traps known as ladders.)

Look for the fungus from spring to fall in birch forests. You may also find it growing on other trees such as elm or beech.

I wish I had some great pictures to show you of how to harvest but sadly I don’t. However, you can find such pictures, along with great information, at the Mushroom Collecting chaga page. While you’re there check out the rest of the site, run by the Mushroom Maineiac and all around cool guy David Spahr.

Some Fun Facts About Inonotus obliquus

I hope you’ve enjoyed learning about this weird yet powerful fungal growth! Now that you know where to find chaga and what it is, perhaps you want to start experimenting with it yourself.