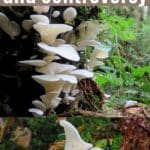 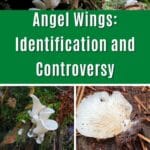 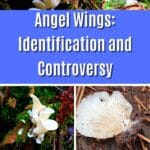 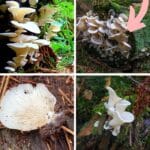 Angel wing mushrooms (Pleurocybella porrigens) are a problematic wild species that closely resemble oyster mushrooms. There are some key differences to make it simple to differentiate them, but you have to be aware of them because making a mistake could be dangerous.

Angel wings are a subject of great controversy in the mushroom world. They are among the deadliest mushrooms, yet, folks have been eating them for centuries (or longer) and still do.

Older foraging guides in North America and around the globe list Angel wings as edible and good. But, more recent guides attach huge skull and crossbones to the species. Angel wings went from good eating to deadly in one month. How does that happen, and what’s the deal with these mushrooms?!

These controversial mushrooms grow on dead or dying conifer trees, logs, and stumps. They seem to particularly like eastern hemlock and appear in late summer through fall.

Up until 2004, this mushroom was foraged and considered a fine edible around the world. It grows in Asia, Europe, and North America. Angel wings were foraged regularly in all of these countries, either knowingly or as a presumed oyster mushroom species.

Angel wing mushrooms were first described to science in 1805. It is part of a very small genus, with only five species in it. P. porrigens, the Angel wings, seem to be the most widely distributed and well-known of the genus. In Latin, porrigens translates to “stretching out” or “extending,” which describes how the caps look, like wings.

In 2004, 59 people in Japan got sick from eating Angel wings. Seventeen of the 59 died of acute encephalopathy – a degenerative neurological condition combined with internal damage, often to the kidneys or brain – in this case, brain lesions. The average age of the victims was 70, and nearly all of them had compromised kidney function.

Another death in Japan was reported in 2009. This victim of Angel wings was 65 and on kidney dialysis prior to eating the mushrooms.

Angel wing mushroom poisoning doesn’t present itself until 13-18 days after eating, and the symptoms include tremors, weakness in the extremities, seizures, and mental turmoil. A few days after the onset of symptoms, lesions appear on the brain, and death occurs around ten days after the beginning of the seizures.

Angel wings are an extremely popular edible mushroom in Japan (or, at least, they were!), and in 2004 record rains brought record harvests. People were eating the mushrooms in abundance, more than in previous years.

It is possible the excessive consumption of the mushrooms had an impact, or it could be the ages of the victims. For a very long time, it was just a mushroom mystery. Researchers were working on the puzzle but couldn’t narrow it down.

Then, in 2011, researchers discovered an unstable and unusual amino acid in Angel wings that they believe to be the cause. This amino acid is now named Pleurocybellaziridine. The amino acid may explain the toxicity, but there are still a lot of questions relating to how it works and if it even was the primary source.

So far, no studies have been done on this toxin’s effects on primate brains. Plus, it seems the toxin and concentrations are easily altered based on climate conditions and mushroom growth.

Researchers have raised some excellent questions, including:

The Angel wing poisoning event was unusual for many reasons, and not just because it happened once (or twice):

The overall appearance of Angel wings is quite like an oyster mushroom, especially if you’re inexperienced with foraging oysters. They are both white, have semi-circle caps that extend outwards, feature gills that go down the stem, and grow on dead or dying trees. That’s a lot of things in common!

In general, though, the cap shape is different, with the angel wings having more of a tongue or half-funnel shape – they tend to stretch up (like wings) while oysters stretch flat to look like an oyster shell. In the wild, though, it is impossible to predict exact growth because the outdoor circumstances may cause varied growth.

Angel wing mushrooms usually don’t have stems but may have a small stubby growth that attaches to the wood.

I won’t say on this site either way what a person should do regarding this mushroom. Each person is responsible for doing their research and making an educated decision. No one has ever died or even gotten sick (as far as we know) from Angel wings in North America. Yet, 17 people dying is not something to be taken lightly.

So, do your research! Think about the risks you’re willing to take, and take responsibility for whatever actions you choose.

How can I be sure I haven’t harvested Angel wings instead of oysters?

First of all, know your trees. That’s a huge step in identification. Conifer tree – use caution. Hardwood tree – probably fine. Go through the list above and do a spore print.
And, if you have any doubt, any whatsoever, don’t eat it. There is no reason to eat a mushroom that you aren’t sure about!

Was it really the Angel wings that caused the poisonings in Japan?

It is circumstantial, but also it’s entirely possible. Fifty-nine people getting sick at the same time indicates something was going on, and if the only thing in common was eating a specific mushroom, that’s a big red flag.