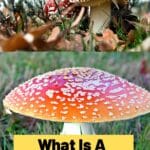 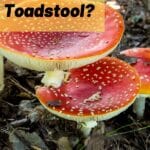 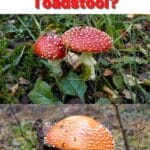 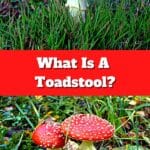 Toadstools appear in literature, folk stories, news publications, movies, and video games and have for a very long time. But what exactly are they? And are they harmful to us or our pets? The answer is a little complex.

The original use of the word toadstool mushroom is not how we use it now. To understand the word, meaning, and potential problems, we must dive into its history a little bit.

What Is A Toadstool Mushroom?

The word toadstool usually brings up images from literature that depicts a bright red or yellow umbrella-shaped mushroom with white specks. The mushroom in this illustration is most often the Fly Agaric (Amanita muscaria), a very toxic mushroom.

Since it became common to use this mushroom in depictions of toxicity, it started a trend. People began illustrating poisonous specimens, or the idea of a poisonous mushroom, with this one image, disregarding the appearance of any other poisonous species.

This, in turn, leads people to believe all poisonous mushrooms look one specific way, which is a dangerous way to think. One of the most deadly mushrooms, called the destroying angel, is all white; it is the exact opposite of colorful.

According to the Merriam-Webster dictionary, the definition of a toadstool mushroom is any with an umbrella-shaped cap, especially those that are poisonous. But, it does not limit the word toadstool to just mean toxic species. So, this definition includes a lot of mushrooms! Umbrella-shaped caps are extremely common in the mushroom world; some are poisonous, and others are not.

What Is The Origin of the Word Toadstool?

The word toadstool was first used in 17th century England. It originated with folk and fairy tales of the time. Toads were thought to carry many awful diseases, and for some reason, illustrators chose to draw them on top of mushrooms. Whether this was to be cute or make a point is unknown.

The end result, though, was that a mushroom was thought to absorb the toads’ diseases. So, even if the mushroom wasn’t poisonous originally, one with a toad sitting on it automatically became diseased or poisonous.

What Does Toadstool Mean Currently?

This mixed-up use of the word to mean two different things ultimately means the word almost has no meaning. When someone says toadstool, do they just mean “a mushroom,” or do they mean “a poisonous-looking mushroom,” or “an actual poisonous mushroom”?

And, this now very unspecific word doesn’t account for poisonous mushrooms that are white or generally not bright, colorful mushrooms. Or that not all poisonous mushrooms are umbrella-shaped. The fungi world, like Mother Nature, does not operate in black and white or with clear-cut yes or no categories.

A poisonous mushroom can be any color. Bright coloring has no impact on a mushroom’s toxicity or poisonous nature. Mushrooms come in a wide range of shapes, sizes, and colors, and while many are umbrella-shaped, that certainly is not the only shape.

All Of The Mushrooms Below Are Toxic

Will Toadstool Mushrooms Harm My Pets?

So, as we just discussed, a toadstool mushroom can refer to a wide variety of mushrooms. Some will be poisonous, and some will be harmless. The only way to know if the specific mushroom in YOUR yard is harmful is to identify it.

Most ultra colorful Amanita mushrooms are poisonous, but the most deadly Amanita is all white. The wine cap mushroom is deep mahogany colored, umbrella-shaped, and an excellent edible species. Many Cortinarius mushrooms are lilac or violet colored, and while many are harmless, others are toxic and will make your pet sick.

This lack of clear-cut rules regarding what is dangerous and what isn’t is, of course, frustrating to those trying to protect their children and pets from harmful mushrooms. But that’s just how it is. We can’t tell Mother Nature to only produce toxic mushrooms in a certain color and shape, so we’ll know them at first glance (wouldn’t that be nice!). To know the toxicity, you must identify the individual species. And also, unfortunately, that isn’t always easy.

The best thing to do if you catch your pet eating a mushroom is to collect as much of it as possible so it can be identified.

Will Toadstool Mushrooms Harm My Lawn?

No, toadstools, and mushrooms in general, are not harmful to a lawn. While you may not like how they look or be worried that a pet or child will eat one accidentally, they are causing no harm to the lawn itself. It’s actually quite the opposite — mushroom growth is a sign of a healthy lawn. It means the soil is healthy enough to support their growth. And the toadstools are also beneficial, providing valuable nutrition back to the soil.

Is It Possible To Remove Toadstools From My Yard?

Yes, but removing toadstool mushrooms from a lawn or yard is complicated. The mycelium or “roots” of the mushroom are underground. In order to rid your yard of the mycelium, you’d have to dig it all up. Fungicides also don’t work because they don’t get to the underground mycelium networks. Regular mowing helps, though it won’t rid the lawn of them entirely. The mushrooms might and probably will sprout again next year.

You can pick the mushrooms individually and remove them. Don’t worry — touching mushrooms will not transfer any bad toxins to you! You must ingest (eat) the mushroom to have any toxic effects. You can pluck them without gloves; it’s totally fine. However, don’t put the toadstools in the compost because you might just end up relocating the problem.

All in all, toadstools are a temporary problem. They don’t live forever. In fact, most have a relatively short lifespan, so you can also wait them out.

If you see toadstool mushrooms growing in your yard, don’t panic. First, identify the mushrooms to determine if they are harmful. Second, remove them if you want, or let them be, and they’ll die off in a few days or weeks.

How toxic is the Fly Agaric (Amanita muscaria)?

Deaths from A. muscaria have been reported in historical papers, but fatal poisoning from eating this mushroom is very rare nowadays. Much of this has to do with current medical advancements and the ability to combat kidney failure and the like. Translation — the mushroom is still quite toxic, but we’ve gotten better at treating the person poisoned.

Most ingestions of this mushroom occur from people seeking a hallucinogenic experience. They do get that experience, and a lot more they didn’t plan on.

How many Amanita species are there?

There are approximately 600 Amanita species occurring around the world. Some are deadly, some are fine edibles. This is why it is essential to know and understand how to identify mushrooms on a species/individual level.

Are all toadstools bad?

No, but that might depend on your definition of toadstool. Read above to learn more.

What happens when you touch a toadstool?

Nothing. Seriously. A mushroom must be eaten in order to experience any side effects. Touching a mushroom, even the most poisonous ones, is fine.

« Toxic False Parasol Identification and Lookalikes
Is This Mushroom Poisonous? »