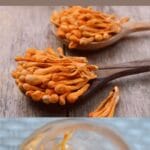 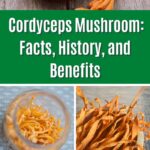 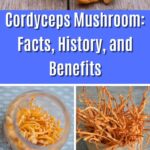 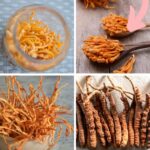 The first time I heard of Cordyceps sinensis (Ophiocordyceps sinensis since 2007) was on the can of a Steven Seagal energy drink. (Yes, such a thing really exists). Although the vile brew didn’t give me the butt-kicking abilities of an action star, it did leave me curious about the fungus that supposedly had an effect on energy levels.

Cordyceps is considered a medicinal mushroom that increases energy, stimulates the immune system, and acts as an overall tonic to the body. It is one of the more famous Chinese herbs, but has only gained attention in the West over the last few decades.

In addition to its reported health benefits, this fungus is known for its unique way of reproducing. It develops inside insect larvae, killing and mummifying the remains before popping out of the ground as a fruiting body. This horror movie action makes cordyceps one of the coolest mushrooms around.

Let’s take a closer look at this fascinating fungus. We’ll start with some basic facts, where we’ll see that truth really can be stranger than fiction! Next we’ll move on to health benefits and information on supplements. Finally we’ll end with some cordyceps controversy, harvesting the wild fungus on the Tibetan Plateau.

Although written record of Cordyceps sinensis use appeared in Traditional Chinese Medicine centuries ago, it wasn’t really noticed in the West until recently. The last two decades have seen a great increase in research on cordyceps as a medicinal mushroom.

There are many reported cordyceps health benefits. Some of these include:

The reasons behind some of these benefits are still not fully understood. Yet research has found some promising proof behind cordyceps claims. A few of the helpful constituents found are:

Sterols – Alcohols of the steroid group. Believed to lower cholesterol, reduce the risk of heart disease, and possibly have some anti-tumor properties.

Polysaccharides – Complex carbohydrates made up of chains of sugars. Known to stabilize blood pressure, have an effect on free radicals, and stimulate the immune system.

Nucleosides – Organic molecules that are the converted into building blocks of the genetic material DNA and RNA. Nucleoside drugs are sometimes used to treat cancer.

One of the most useful things that Cordyceps sinensis appears to do is to perform the simple act of oxygenation. The fungus dilates the airways in the lungs, resulting in more oxygen to the blood. Thus more oxygen reaches every cell of the body, resulting in better cell function and greater energy levels.

All this talk of energy and vigor may make you want to start using cordyceps supplements. I personally like either the Aloha Medicinals brand or the Now Foods brand.

Fortunately this is a safe fungus to take, so go ahead and experiment. Just please keep the below info in mind:

Dosing of medicinal mushrooms varies between people and diseases, but the average reported Cordyceps sinensis dose is between 2 and 5 grams. If using store-bought pills with a concentrated extract, the bottle will tell you how many to take.

Product quality varies drastically between companies. Try to purchase only from a reputable supplier that you trust. As always, organic is best when it comes to medicinal mushrooms.

There’s a lot of hype and money around this fungus, so do your research on a company before you purchase.

You can purchase cordyceps that was either cultured in a lab from vegetable/liquid media or picked wild in the Tibetan Plateau. The wild fungus is much more rare and expensive. Since it is sold by weight, people reportedly sometimes stick small sticks or lead filaments into it to make it heavier. Others claim this is just a myth, and I have never read of any concrete evidence of this happening.

Regardless of any lead poisoning myths, it’s best to stick with the indoor cultivated fungus from a trustworthy supplier. It’s much cheaper and possibly safer.

This supplement isn’t for everyone. Those who shouldn’t take it:

If you have any doubts talk to a doctor or herbalist that you trust.

Wild Ophiocordyceps sinensis grows in one place, the Tibetan Plateau. This is a high-altitude region that covers parts of Tibet, China, India, Nepal, and Bhutan.

The fungus fruits from caterpillars hidden under the ground, so it pops up in the grass as a thin, brown club. As you can imagine, they’re much more difficult to spot than a morel or black trumpet!

The people who hunt wild cordyceps don’t do it for fun or food, but rather as a way to make money. It can be a very important source of income for people living in rural Tibet.

As the fungus grows in popularity, it also grows in price. Increased demand has led to greatly increased cordyceps hunting. Wild harvested cordyceps are one of the most expensive mushrooms in the world right now, due to their uniqueness, location, and supposed medicinal attributes.

Some worry that the high rate of collection of this fungus could be damaging to the environment. Ghost moth larvae feed on the roots of grassland flora species, so a reduction in cordyceps could lead to an increase in grassland destruction. This could greatly upset the ecological balance, leading to problems for humans and the environment alike.

Another concern is the possible future ecological impact on rural Tibetans. Fewer cordyceps could represent a huge loss of income for people living in the countryside.

It is too soon to say what impact increased harvesting will have on the Tibetan Plateau.